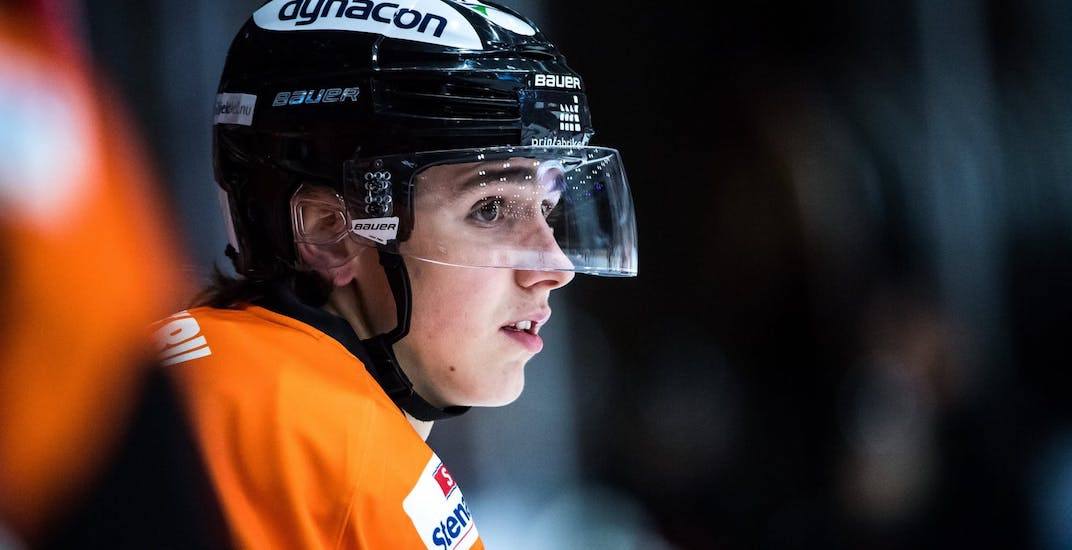 Who is Linus Karlsson?

That was the first thought running through the minds of many Vancouver Canucks fans upon learning the team had acquired him from the San Jose Sharks in exchange for 21-year-old Jonathan Dahlen before Monday’s trade deadline.

A third-round pick by the Sharks in the 2018 draft, Karlsson is currently playing his draft-plus-one season in the Allsvenskan – the second highest tier of Swedish pro hockey behind the SHL, and the league that Dahlen played in last season.

Looking at the raw numbers – 17 points in 48 games – the 19-year-old centre’s stats this season certainly don’t jump off the page, but there does seem to be some reasoning behind that.

Karlskrona – the team Karlsson plays on – was just demoted from the SHL to Allsvenskan last season. Coincidentally, it was Dahlen’s Timra team that beat them and resulted in their demotion.

As such, Karlskrona’s roster is very deep by Allsvenskan standards, and Karlsson has been buried in the depth of that lineup.

That’s a much different situation from Dahlen, who spent his 19-year-old season in 2016-17 playing with Elias Pettersson on Timra’s top scoring line.

Digging through old scouting reports from Karlsson’s draft year, there’s some intriguing facets to his game.

At that time he had just finished an excellent season in the SuperElit (the top Swedish junior league) where he produced 52 points in 42 games – the second-highest total in the league that season.

Draftin Europe described Karlsson like this: “nice shot and combines that with his ability to read developing holes in the offensive zone; quality game from faceoff dots to end-boards.”

“Karlsson is an offensive player,” wrote Chris Legg of DobberProspects back in June. “He possesses a good shot, good hands, and he has the size that won’t hurt his chances of developing into an NHLer.”

The most intriguing report came from CanucksArmy, where it was pointed out by Ryan Biech that Karlsson had a couple of eye-popping statistics. That included the highest involvement percentage (earning a point on 41.6% of his junior team’s goals) of the top 100 prospects CanucksArmy profiled, and an absurdly high GF%REL (Goals-for percentage relative to his teammates) of 24.9%.

Long story short, his junior team was very bad, so his offensive numbers seemed even more impressive than they would on a better team.

Biech went into further details on Karlsson’s game, stating a liking for his “shot and puck handling in the offensive zone,” but described his skating as choppy and lacking speed. Karlsson came in at No. 81 on the ranking, and was later drafted by San Jose 87th overall.

Karlsson doesn’t have the same high-end skill that Dahlen possesses, however his size (he’s listed at 6-foot-1 and 187 pounds) and respectable two-way game makes him more projectable to a bottom-six role at the NHL level. He also plays a more coveted position as a centreman.

While some may be frustrated to see Dahlen traded, it’s also worth mentioning that the Canucks have a very strong history of scouting talent in Sweden.

It will be interesting to track Karlsson as he continues to develop overseas and gets more opportunity with his team. He’s two years younger than Dahlen, who the Canucks acquired two years ago, so this deal sort of acts as a reset button on a young Swedish forward prospect.