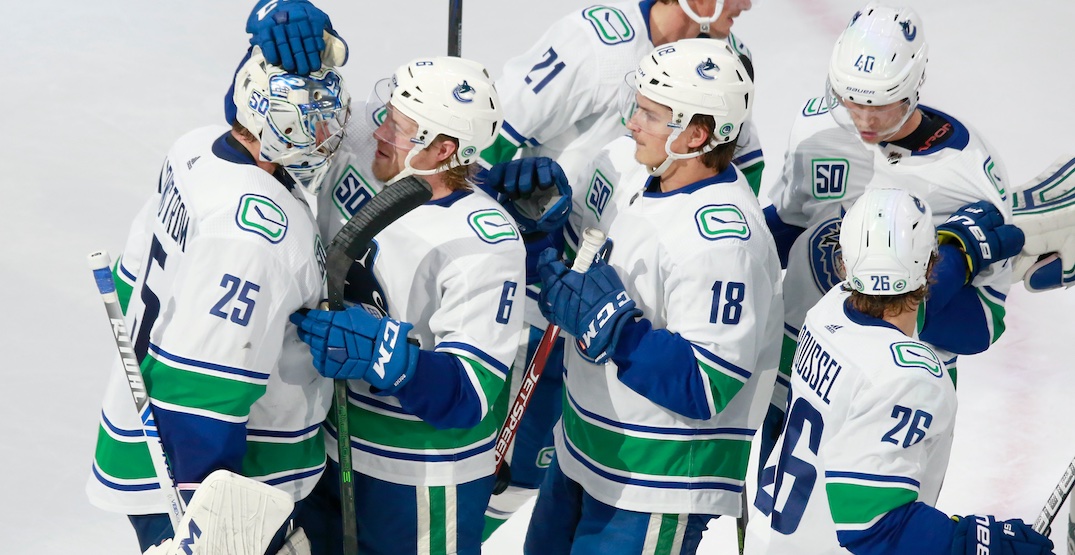 The first outing of the Canucks-Wild series was alarming for local hockey fans, to say the least. The rest hadn’t benefited the banged-up Canucks as much as we had hoped, Vancouver’s leg up in net was perhaps overestimated, and the Wild’s defence-first approach to the game proved to be tougher to overcome than many had anticipated.

In the two games that have followed, however, the Canucks have flipped the script, and look poised to make quick work of the series if they can manage another strong performance in Game 4, tonight at 7:45 pm PT.

Fortunes can change on a dime if the contrast between the first game of the series and the next two are any indication, though. With that in mind, here are seven things we’ve learned in the series so far.

1. Markstrom is back to mid-season form

Alex Stalock won the goalie battle in Game 1, but since then, it’s been all Jacob Markstrom. The Canucks goalie was particularly fantastic on Thursday, stopping all 27 shots he faced en route to the first playoff shutout of his career.

Markstrom has done everything he can to alleviate the concerns of Canucks fans after looking a little rusty in Game 1. He was arguably the team’s biggest X-factor during the regular season, earning Vezina buzz and the team’s MVP award for the second straight season, and the team will likely only go as far in the playoffs as he can take them. If last night’s game is any indication, he looks up to the task of stealing some games in the next round should the Canucks make it that far.

2. The Canucks PK is REALLY good… or the Wild PP is really bad

The Canucks penalty kill had a rough go of things on Sunday night, surrendering two goals on four attempts, but they’ve been much better in their latter two outings. Last night’s performance was particularly strong, as the Canucks penalty killers went 7-for-7 against the Wild, allowing just eight shots on goal over the course of over 12 minutes of 4-on-5 play.

Having said that, it’s also worth noting that just three of the Wild’s 29 shot attempts on the man advantage came from high danger areas, so it’s tough to say how much of the team’s PK performance was of their own doing and how much was due to the Wild’s inability to generate scoring chances.

3. The age of the Wild’s best forwards is showing

The Wild’s top line of Zach Parise, Eric Staal, and Kevin Fiala got its teeth kicked in last night at even-strength in Game 3, surrendering over two-thirds of the share of shot attempts and expected goals while the three of them were on the ice.

Fiala did a great job carrying that line in the first two games of the series, but they hit a wall last night. The line managed just two shots on goal, both courtesy of Fiala, while Staal and Parise struggled to generate anything resembling offence. The Canucks did a good job of stifling the Wild’s attack, but you have to wonder if the fact that the Wild have two players over the age of 35 in their top six is starting to catch up to them.

While the Wild’s top line got the better of their matchups across the first two games of the series, they appear to be running out of steam. Given how strongly Elias Pettersson, Brock Boeser, and Quinn Hughes have played so far, the series may simply come down to the fact that the players the Canucks rely on for offence simply have more gas in the tank.

4. Tyler Myers needs to stay out of the box

Tyler Myers has not had a strong series for the Canucks so far. He’s posted an on-ice expected goals for percentage of 36.4% (second-worst among Canucks defenders behind only his partner, Oscar Fantenberg) and taken a number of undisciplined penalties. He took three minors in Game 3, adding up to a grand total of six in his last two games, and is now tied for the second-most penalty minutes across the league in the postseason.

The good news is, his lack of discipline hasn’t really cost the Canucks much yet thanks to their solid performance on the PK. The bad news is, he’s one year into a five-year, $30 million contract. Obviously, size and grit were two factors that went into the Canucks’ decision to lock him up, but I’m not sure this is what they had in mind.

NHL officials generally have a reputation for putting their whistles away in the postseason, but that hasn’t been the case so far in this series. The Canucks and Wild took 7 penalties apiece last night, with a ticky-tack interference call against Elias Pettersson standing out as particularly egregious.

The jury’s out on whether or not the refs calling the game by the book has produced better hockey, but you could argue it kept what was a particularly nasty game for both teams from boiling over.

6. Hartman is the new heel in town

Ryan Hartman had already drawn the ire of a Canucks’ forward heading into Game 3 when he ended up on the receiving end of a spear from Micheal Ferland. He was mixing it up again on Thursday, landing a questionable hit on Pettersson that enraged J.T. Miller, as well as a large portion of Canucks Twitter.

August 6, 2020: Ryan Hartman becomes the most hated hockey player in Vancouver – until the next time the Canucks face Brad Marchand…

It takes more than just the odd dirty play to get under the skin of Canucks fans, though. Hartman has also quietly been one of the Wild’s most effective forwards, posting the best share of expected goals on the team across the first three games of the series. He led the team in that category again in Game 3, and while he didn’t play much he was one of the lone bright spots in what was a difficult outing for the Wild.

The Canucks and Wild were both middling teams during the regular season, but their sharply contrasting styles have served as perfect foils for each other when they’ve been able to keep to their respective game plans.

The importance of “setting the tone” is often overstated by hockey men, but scoring the first goal has been a huge factor in determining the outcome of the games so far.

It’s a bit of a cliché, but both teams are much more effective when they make their opponent play their game. The Wild have generally been great at clogging up the neutral zone, but they open up space when they’re down by a goal or two, which leaves the Canucks in a position to take advantage. By the same token, the Canucks struggled mightily against Minnesota’s stifling defensive system when they found themselves trailing in Game 1. Don’t be surprised if the final game (or two) in this series comes down to who is able to capitalize first.