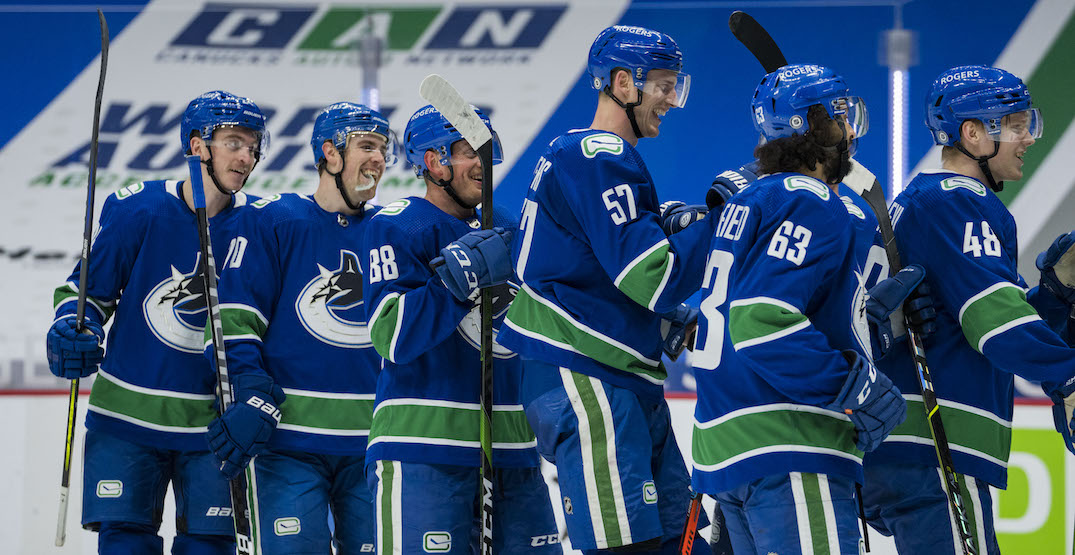 After all they’ve been through, believe it or not, the Vancouver Canucks are back in the playoff race. And you can say it with a straight face.

The Canucks weren’t given much chance before COVID-19 ripped through their team, and even more people wrote them off after the outbreak.

But after most of their players were barely able to get out of bed last week, against all odds, the Canucks rattled off two consecutive victories over the North Division leading Toronto Maple Leafs.

“That’s why we play the game,” said Canucks head coach Travis Green. “A lot of people were thinking that we couldn’t win either one of these games. Our team’s here to win.”

The team the Canucks are chasing, the Montreal Canadiens, have been struggling mightily of late, as losers of six of their last eight games.

So with four straight games against the cellar-dwelling Ottawa Senators upcoming, the Canucks now find themselves eight points back of the Habs with four games in hand.

It’s still a daunting task, but the Canucks have given themselves a chance in the eyes of more than just their most unwavering supporters.

Vancouver now has a 25% chance of making the playoffs, according to Dom Luszczyszyn’s model published in The Athletic. They’ve got longer odds by MoneyPuck.com’s projection, at 9.7%, but that’s a probability the Canucks will gladly take given where they were.

With no more games scheduled against Montreal, chasing them down will be difficult. Still, with Brendan Gallagher out for the rest of the regular season and Carey Price now out with a concussion, it’s certainly not out of the question.

Although the Canucks did benefit from shaky goaltending from the Leafs, clearly Vancouver was at a disadvantage in both games with so many players fatigued from COVID-19, if they were in the lineup at all.

Suddenly, Braden Holtby is a viable option in net. They played Sunday’s game without five players who were recovering from COVID-19. Tyler Motte still hasn’t been able to play, and Alex Edler is only halfway done a two-game suspension.

And oh yeah, Elias Pettersson is still injured too.

If you’ve followed this franchise for long enough, you know that the team falling flat against Senators is a distinct possibility. But if the Canucks can rattle off four straight wins? Well, that could put them neck-and-neck with the Habs with 13 games to go.

But first things first. The Canucks will do some scoreboard watching tonight, as the Canadiens are in Edmonton to take on the Oilers. The Senators and Canucks begin their four-game series on Thursday.