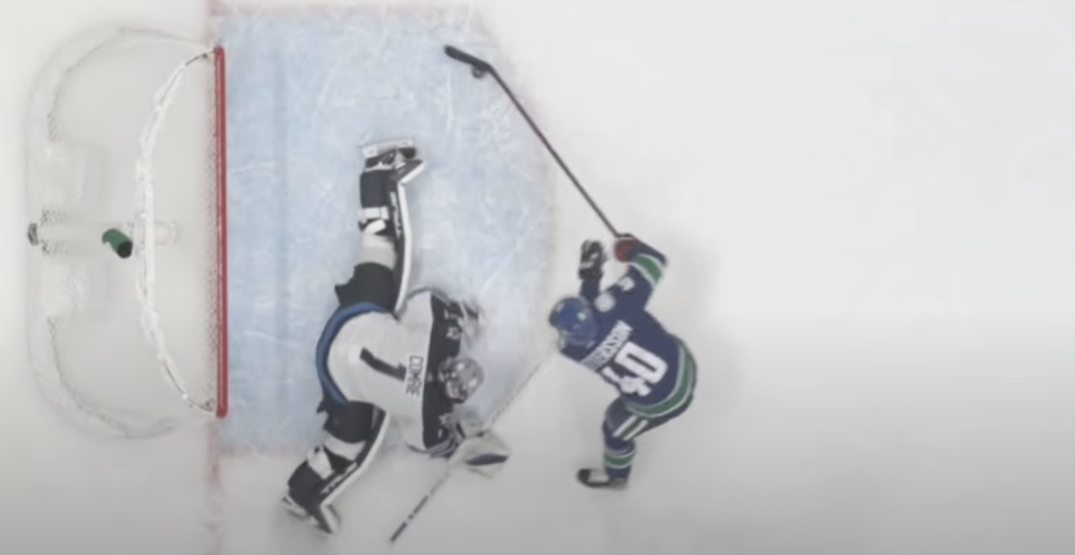 The backhand move was great.

The back-and-forth that followed was better.

Elias Pettersson scored in the opening round of the shootout for the Vancouver Canucks on Saturday, a 4-3 win against the Winnipeg Jets to push Bruce Boudreau’s record behind the bench to 3-0.

Pettersson’s move of choice? The Forsberg.

On the call? Corey Hirsch, the now Canucks analyst for Sportsnet 650 who was victimized by Peter Forsberg at the 1994 Lillehammer Olympics with the very same move the deke is now named after.

Forsberg secured Sweden a gold medal at those Games by beating Hirsch in a shootout in a 3-2 victory over Canada.

.@CoreyHirsch: Petey, do you know what that move is called?

Pettersson: Felt nice. I mean, I missed the last two shootouts. The puck’s been wobbling on me, so I tried to stickhandle it in today and yeah, it went good.

Hirsch: Hey Petey, do you know what that move is called? What they call that move you did?

Hirsch: Do you know who he scored on with that?

Pettersson: Oh. What a coincidence.

Hirsch: That was me man. ’94. You probably weren’t even born yet.

Hirsch: Well I’m that guy, so I’m just going to go hide in the corner. You guys ask the questions.

The exchange with Pettersson wasn’t Hirsch’s only giggle-maker. Live on the call, Hirsch and 650 play-by-play voice Brendan Batchelor also shared an all-timer.

As Batchelor made the call on the shootout marker, he handled the Pettersson deke without poking fun at his booth-mate.

And Hirsch made sure of it, tongue firmly planted in cheek of course.

Batchelor: Dekes to the backhand, he scores. An unbelievable move by Elias Pettersson gives the Canucks an early lead in the shootout.

Hirsch: Pettersson using the old ‘drag it to the backhand and then put it in behind the goalie…if you say it Brendan, I’ll punch you right in the face right now.

Bachelor: Then I won’t.

Credit to Hirsch for taking the fun in good humour.