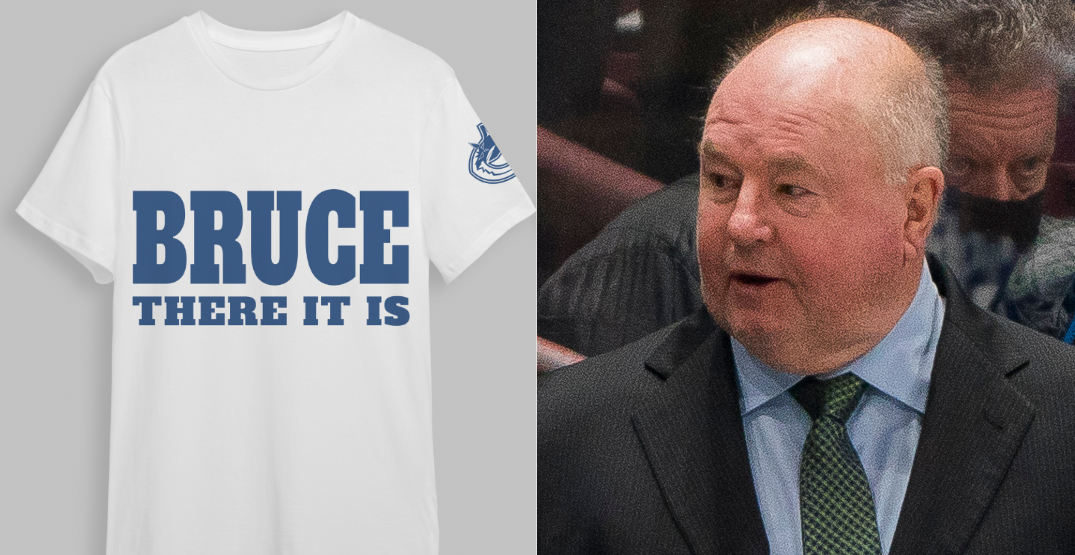 And it’s gaining a garment.

The Vancouver Canucks revealed via Instagram on Friday that a “Bruce There It Is” t-shirt is indeed now available at the Vanbase store.

The #Canucks are now selling “Bruce there it is” T-shirts. pic.twitter.com/DBFzwiVZkR

Vancouver fans serenaded the newly minted Canucks coach to the tune in his first game behind the bench in Vancouver with the track, and have continued carrying the tradition forward.

At even the most inopportune times.

“I haven’t been out too much. I’ve been in here [at the rink],” Boudreau said on his fifth day on the job. “I went out to dinner last night and they were singing that stupid song, and I went like this [shushing them] and they shut up, and that was the end of that.”

“BRUCE! There it is!”
The new battle cry of #Canucks fans at Rogers Arena pic.twitter.com/f1jJgZNzdK

Whether it’s Boudreau or just the good-luck charm of the song, the Canucks are 3-0 under the new skipper.

The energy around the club is “crazy,” Boudreau said.

“It’s been such a whirlwind. I’ve gone to new teams, but it’s never been anything like it is here. You’re learning to adapt on the fly.”

"I had people tweet that to me. It’s pretty funny. If you lose the next game it could be ‘Bruce, there he goes.’ 😂

🗣 Head Coach Bruce Boudreau on ‘Bruce, there it is’ chants