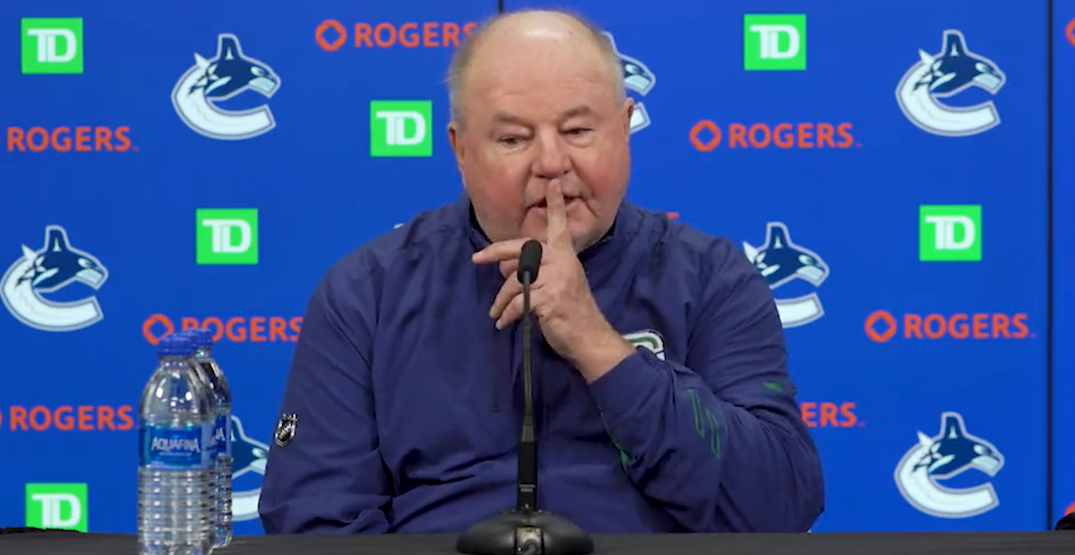 Bruce Boudreau didn’t hear the “Bruce there it is” chants for him during his Canucks coaching debut, but now he can’t escape them.

“I haven’t been out too much. I’ve been in here [at the rink],” Boudreau said on his fifth day on the job. “I went out to dinner last night and they were singing that stupid song, and I went like this [shushing them] and they shut up, and that was the end of that.”

Boudreau: “I went out to dinner last night and they were singing that stupid song.”

🎶 Bruce there it is 🎶 pic.twitter.com/D84Uvh3IOk

On Tuesday, Boudreau admitted he did find the chant comical, but he also said he would “pay as little attention to that as possible.”

“It’s pretty funny. If you lose the next game, it could be ‘Bruce, there he goes.'”

Clearly, Boudreau knows about the pressure that comes with playing in a Canadian market.

The 66-year-old coach is perhaps the most charismatic coach in the NHL, and fans are loving him already. Much of that is also due to the team’s quick turnaround on the ice, albeit in a small sample size.

The Canucks are 2-0 under Boudreau, and the players are playing with more energy.

The entire fanbase is energized too, which Boudreau admitted is something he’s never seen in his other stops in Washington, Anaheim, and Minnesota.

“It’s been such a whirlwind. I’ve gone to new teams, but it’s never been anything like it is here. You’re learning to adapt on the fly.”