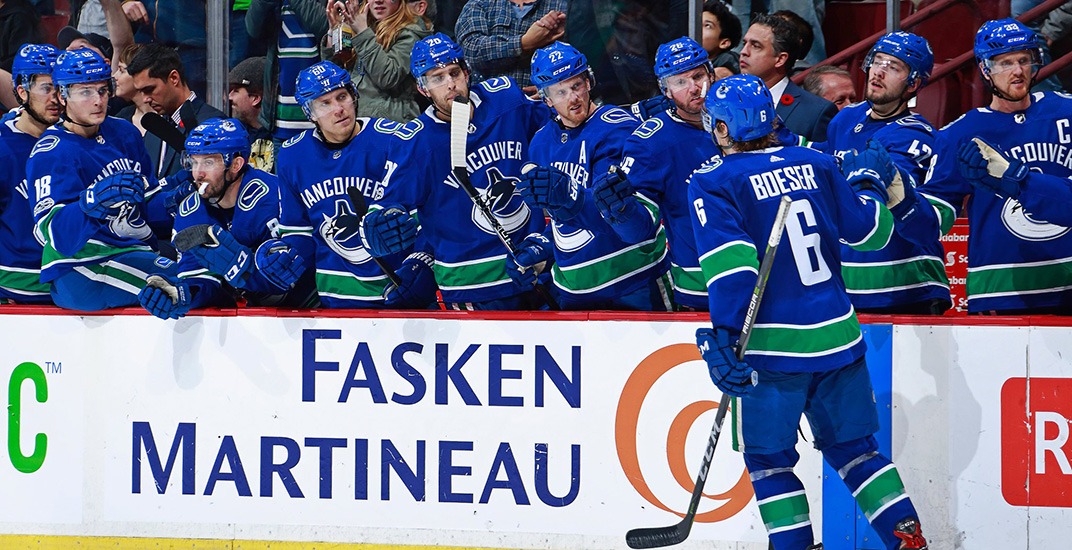 The new reality is real.

Six minutes into the game, I found myself with a list of six giffable moments to capture.

Last season a SixPack writer would watch most games and be lucky to have half that.

In the first three minutes, Chris Tanev pulled the puck off the inside of the goal line.

Derek Dorsett hit the post on a shorthanded chance.

And Conor now “Sherry” scored on the power play after a Baertschi-like pass from Sidney Crosby.

Three minutes into the game.

After the Canucks wasted Tanev’s massive save and Dorsett’s shorthanded chance by giving up the first goal, I’m sure there were many fans who thought the Stanley Cup champions wouldn’t look back.

But three Canucks weren’t having any of it. If you said Brock Boeser, Bo Horvat, and Jacob Markstrom beat the entire Pens roster by themselves, you wouldn’t be off base.

This much is for sure: Vancouver would’ve allowed more than two and would’ve had four goals less… and that 4-2 win would’ve probably looked more like a 5-0 loss.

Hell of a night for the new Canucks. It was a decent team effort and their game-breaker broke the game. It was a game that went a long way to prove that their current record is not a mirage.

And… here’s what you need to know.

Bo and Brock hooked up for their first seven minutes into the game.

As soon as they got back on the ice, you could tell they weren’t done. This was Boeser’s next touch in the offensive end.

Every time he had the puck he wanted to create a shot. And somehow he always manages to get it to the net.

His second goal (amazing passes from Horvat and Baertschi here):

And the hat-trick marker – this wasn’t some empty net gimme, it came five minutes into the third period, and it came after the Penguins had tied the game 2-2 and looked again like they might take over the game.

You so sure about this Am’mar?

He’s in running for sure, but Keller pretty much has it locked up in my books.

Now, while Boeser had a 3G, 1A night, I should mention Horvat’s completely overshadowed 1G, 3A game.

And if that was overshadowed, I don’t even know what term to use for poor Sven Baertschi, who had three assists that no one may ever speak of.

Anyway, here’s Horvat’s goal – the Canucks 4th – that all three got in on.

Not the best shot of the finish, but you get the idea.

One more thing about the BBB line, and this is massive: if you were going to guess which line would’ve played most against Crosby’s most would’ve probably said Sutter-Dorsett-Granlund, given the way Green’s line-matched up until now.

Instead, it was Horvat’s line who faced Crosby the most, and they didn’t just shut Crosby down (87 did get one assist, but it was on the power play), they scored four themselves too. Meaning if the coach starts seeing Horvat’s line as a viable shut-down option, the Canucks might be scoring a lot more while Green still manages to get his matchups.

As mentioned above, Markstrom did as much for this win as Boeser.

Crosby and Sheary nearly hooked up for one here.

And then there was his work on Phil Kessel.

Kessel, possessor of one of the league’s best snipes, had six lasers on net. Markstrom turned him away like Daniel turns down foolish questions on PITB Live.

3. Where did the Sedins go?

A lot has happened since my last SixPack on Monday (Bailey wrote Thursday’s). One of the biggest things that shook Canucks-land was Jawn Jang’s take that the Sedins aren’t superstars.

Daniel Wagner wrote about it on PITB, Botch did a section on it in the Provies, and Reddit and Twitter went nuts.

I also attempted to christen Jang Double J. Honestly, the moment I did it, I felt as if I’d seen the nickname somewhere before… sadly I didn’t remember where.

hang on. Janower’s had that handle in this town for a while.

there is already a double j in the local media, this will not be accepted. and lol at brocket, also vetoed

Clearly I should’ve listened to my gut feeling. Could’ve avoided the double shut down.

I’ll take my lumps – that’s what happens when you step on the toes of the Vancouver’s Brad Gilbert of hockey nicknames.

I’ll go back to the drawing board on my nickname game.

In game one after Jang’s call out, the Sedins went into full vintage mode, dominating the Devils every time they were on the ice. But if you expected more of that Saturday, it just didn’t happen.

Green matched Horvat against Crosby and Sutter against Malkin, and in the third period that allowed for just two shifts for the twins. They didn’t play over 10 minutes in the game.

Despite the limited playing time, I did pick up a couple of things. First, Virtanen has to be better with his passes if he’s going to stick with the Sedins.

Or just go with Ten and Petterson’s gameplan:

On his next shift it did appear he’d learned his lesson, going more into power mode.

For some reason the refs don’t appear to notice when Jake’s mauled, though.

CBC’s panel had some interesting things to say during the second intermission.

First, Kelly Hrudey wanted to give all credit for Baertschi’s development to Willie:

Hrudey: “I also want to give credit to Willie Desjardins because Baertschi makes that great play right there – he was lost when he was in Calgary and he had no confidence. Willie thought because of watching him in junior that he could find a way to get the confidence back…”

Friedman quickly slowed that roll: “Wasn’t he with Travis too in Portland?”

To be fair, both Willie and Green deserve credit on that one. Willie was patient when many wanted Baertschi shipped back to Utica.

Then they went completely East coast on their Markstrom take:

Elliotte: “The one thing about [Markstrom] is Florida and Vancouver have wanted him to be the number one. Do you get the sense, though, that he’s never really taken it upon himself to grab that job by the throat and just hold it?”

Hrudey: “It appears to me he’s on the cusp.”

Suggesting he’s never tried to take that job and hold it? He did. He tried and won the position in the middle of last season, but as soon as Miller returned from injury, Willie went back to him.

Really, the entire statement “Vancouver has wanted him to be number one” is not correct. The only reason he’s in a position to have the job this year is the team’s first choice – Miller – went and signed with another team.

Kind of a tone-deaf Eastern-media take to suggest Markstrom’s at fault for the Canucks signing Miller to a $6-million contract and never allowing Markstrom more games, even when he deserved it.

On Friday I wrote about how the Sedins need to be surrounded by more talent on their power play unit.

The gist of the post was the Sedins are still offensive drivers for Vancouver, although they’re playing less at even strength now. They’re still playing the most power play minutes on the team, and if their power play line is playing like the number one unit, they should be complimented by the best shots on the roster.

This was Friedman before the game:

“Angry Vancouver Twitter looks like it gets Brock Boeser in the shooting spot on the power play.”

OK, so he wasn’t going to be on the Sedins’ unit, but at least it was a step in the right direction for Boeser and Angry Canucks Twitter.

And here’s how they lined up on the Canucks’ first power play of the game. 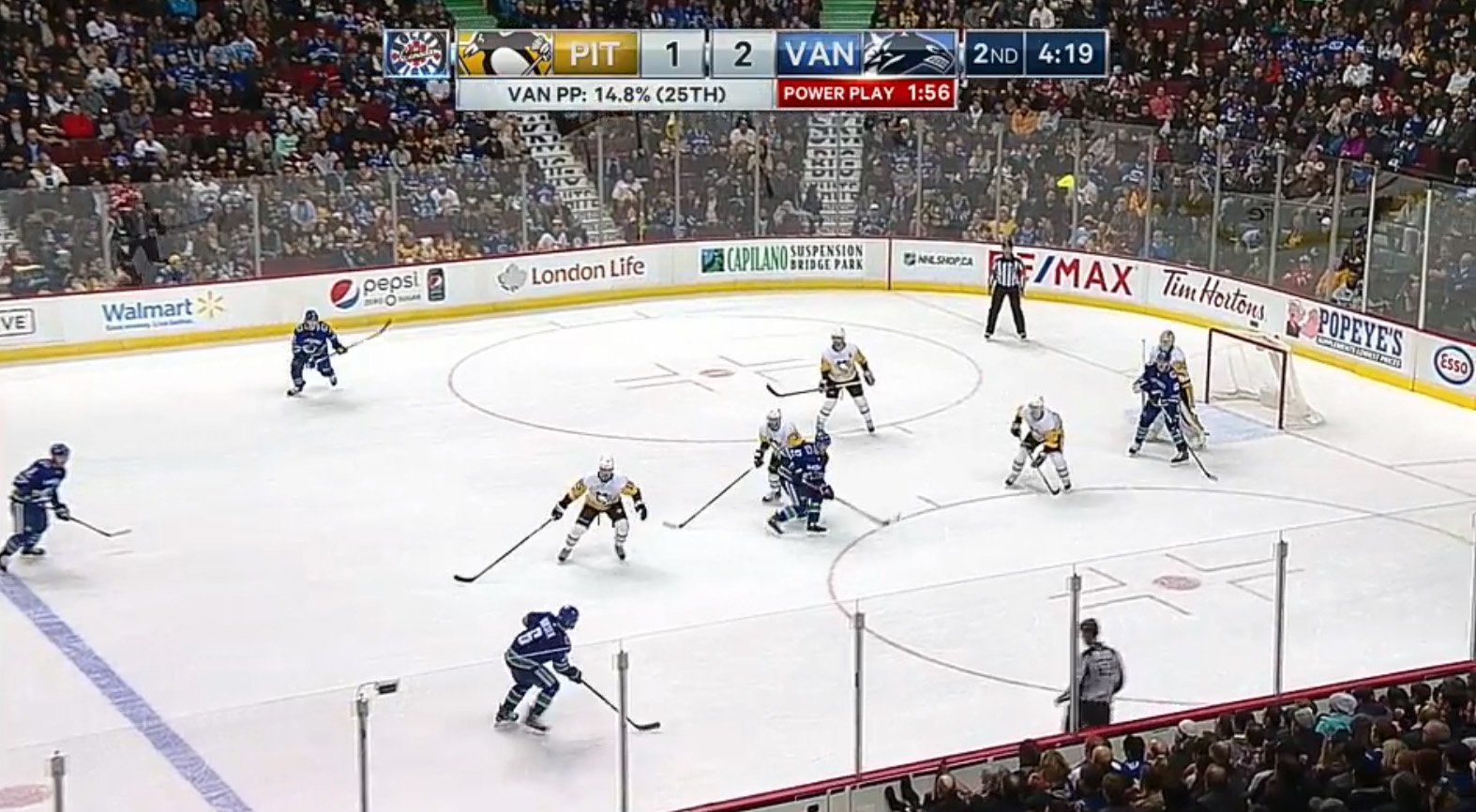 Right point? That’s not what Twitter meant when it said it wanted him in the shooting position…

Vancouver had another power play in the third.

The bad news: Boeser was back in his old net-front spot.

Of course Boeser scored three goals, so “Angry Vancouver Twitter” would go on hold for at least a few hours.

Back to Brock – this game, this SixPack, it’s all him.

He was this close to hitting the empty net for a 4-goal night, btw.

As long as Canucks fans are smiling, you should enjoy Sir Earl’s poll question too:

Note: Thanks to Ryan Biech for his quick giffing trigger fingers