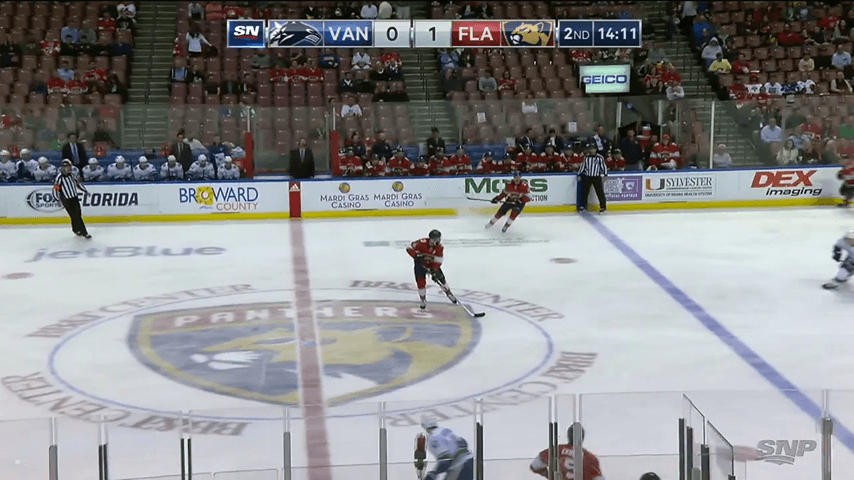 The Vancouver Canucks and Florida Panthers matchups of the last few years were always entertaining. The pinnacle of those games was when Henrik scored his 1,000th point against the former Canucks netminder last season.

But the days of facing off against Luongo may be over. His constant groin injuries have kept him out of action since November 4th and – at 38-years-old – leave serious concerns about his future in the league.

Instead it was 28-year-old Harri Sateri getting the start for the Panthers. He wasn’t overly busy but did make a few key saves, and that was all he really needed to get the win, as the Canucks lost 3-1 in Florida

As a goaltender myself, I felt for Markstrom in this game. It’s a crummy feeling when you have a great game but your team can’t muster any offense, and that was the case on Tuesday.

The Panthers outshot the Canucks 41-27 in the game, but the score was only 2-1 before an empty netter eventually sealed the deal. Markstrom did everything in his power to keep it close.

Here’s what Markstrom had to say post-game.

“We have to learn that it’s a full-time job. We have to show up and play a full 60-minutes, myself included. We have to work harder and get the job done.” – Markstrom

It’s been a rough season offensively for Granlund, which was expected after a reduction in minutes and offensive opportunities under Travis Green.

The 24-year-old scored on Tuesday – his first goal in 19 games – and it came while killing a penalty.

Aside from the shorthanded goal, Granlund and Brandon Sutter (who I go into more detail later on) were both very good on the penalty kill in this game

The lack of attendance at Florida Panthers games has been well-documented for years now, but it’s still jarring watching games in Florid on television and seeing entire sections of empty seats.

Vancouver Canucks Vs Florida Panthers. Not bad for $15US!

Look at those stands. This isn’t at the start of a period. This is smack dab in the middle of the hockey game, and there are clusters of empty seats in the arena.

The panthers should definitely relocate

Florida remains a bottom-four team in attendance, ahead of only Arizona, Carolina, and the New York Islanders. Not great company.

However, this wasn’t a great game – particularly the first period – so maybe fans knew what they were doing.

that period looked & felt like two teams that are separated by 5500km, haven't seen each other this season and have no real beef with each other

After the first period, Green switched some of the lines up in the middle frame, one of which was Jake Virtanen taking Eriksson’s place on the Sedin line.

I like Virtanen playing with the Sedins, but I can’t help but wonder if switching his line so often is making it harder for him to find his footing in the NHL.

Virtanen hasn’t really had a consistent linemate to play with this season, and for someone who seems to have troubles with his hockey IQ and thinking the game, switching the dynamics of his line so often probably doesn’t help.

I’m not trying to make excuses, Virtanen needs to be better. But I’d like to see him get some consistent linemates for a few games and see if that helps his own consistency.

The only consistency Virtanen has had this year is being stapled to the bench for third periods.

5. Bad time for a breakdown

The eventual game-winning goal was scored on a breakaway by Panthers star Alex Barkov. He showed why he’s having a breakout season offensively with a nice move, but it also wasn’t exactly played perfectly by Ben Hutton.

It’s not good timing for Hutton. This was his first game back in the lineup after being a healthy scratch for the sixth time this season against Tampa on Saturday.

It also comes at a time when his name is swirling in trade rumours.

From an agent, "Hearing the Canucks are getting a healthy amount of calls on Ben Hutton for a trade. Vancouver not shopping him but they are certainly listening." #Canucks

On top of that, there have also been rumblings lately in Vancouver that Hutton isn’t the hardest worker off the ice.

After an impressive rookie season, it’s been quite a tumble downhill for the 24-year-old defenceman.

I’m rooting for him to turn it around, because I love his personality and think he has the tools to succeed if he can put it all together.

6. A tale of two Sutters

Think back to last season for a moment. Did you groan every time Sutter was on the power play? I know I did.

Under Willie Desjardins, Sutter was one of the most loathed Canucks in the past few seasons, specifically last year when he held a spot on the top PP unit despite never doing much of anything.

Now back to this season. Sutter has been much more tolerable (I won’t dare say likeable yet) under new coach Travis Green.

He isn’t on the power play. He isn’t relied on as an offensive force (although he does have points in four straight games). That’s not Sutter’s game.

Green has used Sutter as his go-to shutdown center, and in this role Sutter has fared quite well.

Tonight, killing one of four Canuck penalties, Sutter’s active stick in the neutral zone was the main reason Granlund was able to score that goal.

I was planning on doing a section on Sutter before this, but that play secured his spot in this SixPack.

He had another nice play earlier in the game – a blocked shot on a quality scoring chance by Colton Sceviour.

Many people will look at Sutter’s corsi (43.4% – worst among Canucks forwards) as an indicator of poor play, but a decent portion of that can be explained by facing the opposition’s best players regularly, as well as starting more than two-thirds of his shifts in the defensive zone. Only elite sniper Brendan Gaunce has a lower zone start percentage than Sutter.

Sutter’s biggest impact on a game is on the penalty kill, where he logs over three minutes of shorthanded ice time per game. That’s a full 40 seconds more than the next highest forward – Granlund.

And for all the top line matchups he’s had this season, the fact he’s only taken four penalty minutes is quite impressive as well.

I’m not suggesting Sutter is worth his $4.375 million price tag, but he is a good piece to have on a team – a third line center that can kill penalties, play against tough competition and chip in with the occasional goal.