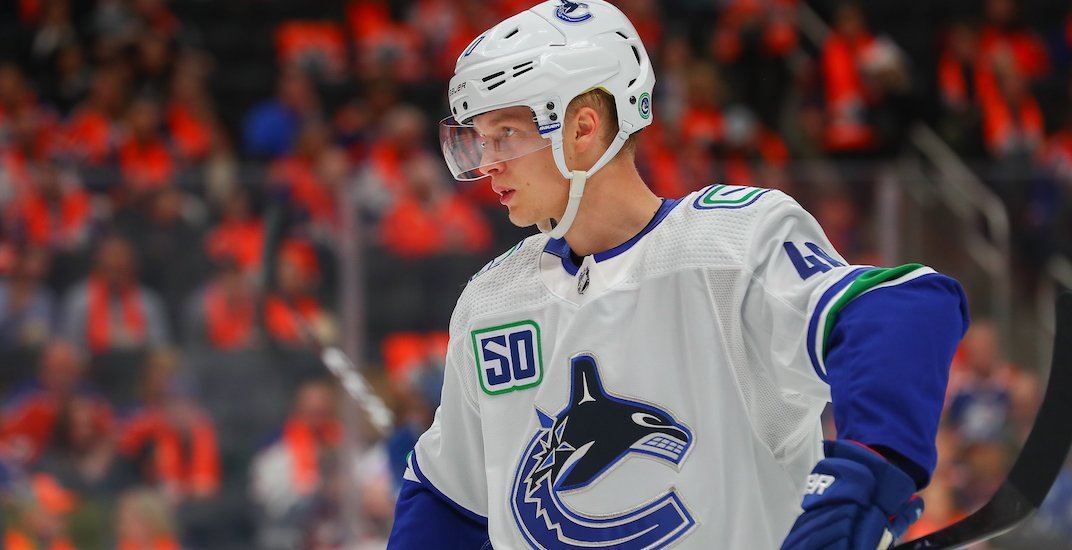 A day after the Canucks opened the season with a 3-2 road loss against the Edmonton Oilers, Aquilini answered the questions of Satiar Shah and Jawn Jang on Sportsnet 650 this morning.

In the near half-hour interview, Aquilini spoke about a wide range of topics — from the pending Canucks captaincy announcement, to the future of their AHL team in Utica, to the possibility of bringing an NBA team back to Vancouver.

If you care about the team’s logo, and I know you do, then you’ll be interested to know that the team may alter it sometime in the future.

When asked if he’d consider changing the team’s logo, Aquilini put his full support behind the Orca, which has served as the Canucks’ symbol since 1997.

But on two occasions, unprompted, Aquilini said the Canucks “might tweak” it.

“I like the logo,” Aquilini said. “It’s indigenous to the region. We’re going to keep it. We might tweak it.

“It represents the current generation… We’ve got a whole new group of fans and they identify with this logo and they like this logo.”

So switching back to the Flying Skate or Stick-in-Rink is out of the question, as is creating an entirely new logo. No real surprises there.

But “tweak” you say?

“We don’t have any plans to change it, but we might tweak it a little bit. Our fans can connect with our current logo.”

The Orca is now the longest-serving logo in franchise history, but the Canucks have made alterations to it before. The Canucks simplified the colours when the team went back to blue and green in 2007, ditching the navy/silver/burgundy look from the Markus Naslund era.

The Canucks Orca logo has evolved since it was introduced in 1997 (SportsLogoHistory.com)

Just when and how the Canucks are considering making alterations to the logo in the future is unknown. The team dropped “Vancouver” from their jerseys this season, and made changes to the modernized Stick-in-Rink shoulder patches.

Perhaps the team would consider adding green to the logo, or maybe they would make alterations to the design itself. That’s pure speculation though.

It doesn’t sound like something’s imminent, but it was interesting nonetheless.

Expect Horvat to be named captain

On who the next captain will be, Aquilini said: “It’s probably the worst-kept secret in town but I’m not going to let the cat out of the bag.”

If he admits it’s “probably the worst-kept secret” then doesn’t that mean the team is picking Bo Horvat, who most assume will get the C? I think the cat may indeed be out of the bag.

We’ll find out for sure on Wednesday at the home opener.

Aquilini feels good about the direction of his team, but is demanding it improves, and rightfully so.

“I think the whole city is expecting improvement.”

If you’re hoping the Canucks owner will buy an NBA team sometime soon, or ever, it’s not happening. At least not without help if the current price remains astronomically high.

“The numbers are cost-prohibitive now. There was a time when maybe it was possible, but to spend $2 billion on an NBA team, it’s not something we’re going to do.”

As for the future of the Utica Comets, the Canucks owner pointed out that there are two years left on the current deal with their AHL affiliate.

“We’ve got a good relationship with the Utica guys. But we’re always looking to improve. Our guys are always looking at how to make things better. If bringing the team closer makes it better from a hockey perspective, then I think they’re going to look at that. There’s pros and cons on both sides of the argument.”

Aquilini was talking both about the possibility of bringing their AHL team to the Lower Mainland, or somewhere else closer to home. The new Seattle NHL franchise has announced they will have an affiliate in Palm Springs, close to a number of other new franchises in California.