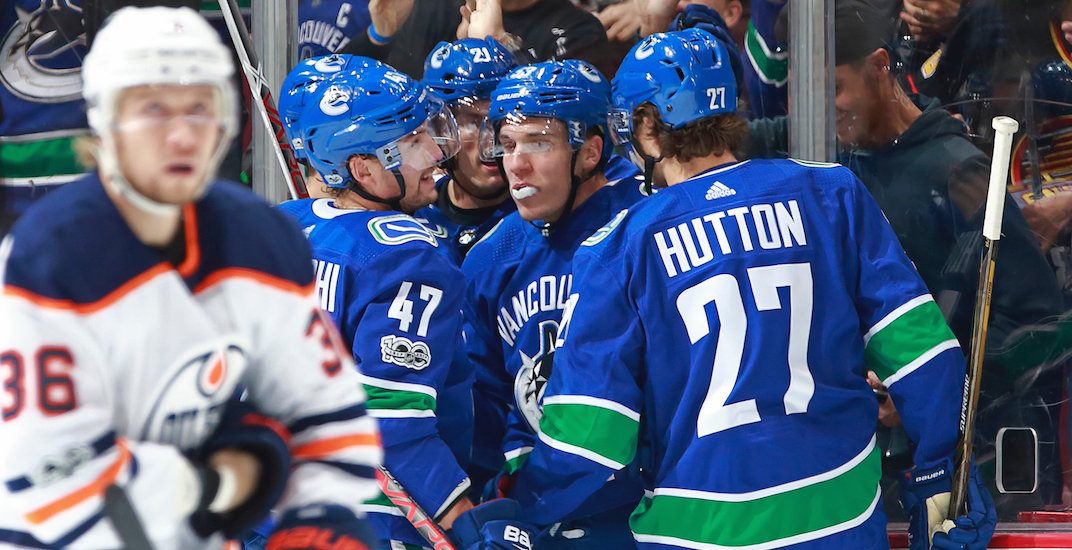 Is it that different? Check out the ice time of Vancouver’s forwards and you tell me.

This is not a joke or a typo – the Sedins and linemate Thomas Vanek played more than only one forward, and it’s the kid who almost didn’t play at all in Saturday’s game – Jake Virtanen.

If Willie had kept his job as coach for five more years and the Sedins played until they were 43, you’d never see that.

And you know what else? It was fun.

Saturday’s season opener against the Oilers was entertaining to watch.

That’s a hell of a thing to write about a Canucks game. To be honest, it feels like it’s been about 5 years since I wrote that in a SixPack.

But, I mean, I don’t think the SixPack has been around five years, and also, there were a few good games last season. Two maybe?

“Pond hockey” and “Chances at both ends” were two lines CBC’s commentary crew used to describe the game.

There was a fight, Vancouver shut McDavid off the scoresheet, and Vancouver won 3-2. It was a hell of a way to start the season whatever way you look at it.

That’s important considering how hours before the game even started fans were ready to boycott the team, all Aquilini owned properties, hockey, and professional sports in general when they found out the rookie wouldn’t be playing.

Not that rookie. This one.

.@BBoeser16 is not in the #Canucks line-up tonight, said Green.

This is why half this city is turning into Oilers fans.

Hey @Canucks , my family & I bought 6 tickets for tonight to see Brock play. Keep this up and we won’t buy tickets again #GIVEUSWHATWEWANT

Wow, and you want us to come pay overpriced tickets for what… Vanek?

It took me 2 and a half yrs to say fire Willie. Don’t make me start wanting you gone Green

How was that raging fan-base feeling as the game drew to an end?

We could actually win this. #Canucks pic.twitter.com/S18ayv8w5s

Sure, there were fans who saw past one win and are still looking at the big picture –

also, canucks power play was 1-for-7, hard to think a sniper like boeser wouldn’t improve it at least *somewhat*

But most were just happy to see the Canucks hang with Edmonton because of some significant changes under the new coach.

Rogers Arena is Green’s World now… and if this is how it looks, it may not be a bad place.

We’ve been hearing for a while that Horvat’s line could be number one this season and it was going that way down the stretch last year too.

Still, it’s one thing for a team that’s been eliminated from the playoff race to not force its veterans to kill themselves for no reason, and it’s another thing entirely for Horvat to lead the team in ice time in the season opener and reward his coach with two goals.

(Note: thanks Ryan Biech for this gif)

Even though his first of the season was scored on the power play, it was a typical drive-hard-to-the-net Horvat goal.

His second – he forechecked hard, created the turnover, and reaped the sweet sweet reward.

One thing to note: for all the talk of the Sedins being invisible or “done” after the game (there were a lot of tweets like this one flying around)

Daniel and Vanek were the only Canucks forwards not in the negative column in shot-attempt differential (corsi plus/minus), and Henrik was at minus-1. The next closest Canuck forwards were at minus-5 and it got worse from there.

Was this because the Sedins were sheltered from Edmonton’s top lines while others had to take on McDavid and co? Yes, definitely. Still, it’s worth noting.

So… now it’s been noted.

Vancouver’s second best forward on Saturday, and this one’s a lot more surprising…

Never thought I’d say this. But Dorsett has been UNREAL tonight

Dorsett, Sutter, and Granlund were charged with shutting down McDavid’s line for the most part. Unlike sticking Sutter on the first-unit power play like he was all last season, this is a role that actually makes sense for these guys, and they did their job well.

Sutter scored Vancouver’s go-ahead goal in the first, and Dorsett quietly made the goal happen with his hit on Oscar Klefbom that forced his panicked pass back to Kris Russell.

And Dorsett in over Boeser made sense to the fans, for one night anyway.

It’s pretty impressive that Virtanen played just 7:34 of ice time yet imprinted himself as one of the most exciting players in Saturday’s game.

And yet still remained one of the most noticeable players

He did that with rushes like this one that earned the Canucks a power play during the first period.

Now, before going too far and wanting him to play 15+ minutes a night, realize Virtanen’s line was on the ice for Edmonton’s first goal and the three forwards did not come back quickly enough to back check. The reduced ice time was likely a reflection of that, but the good thing is that after sitting him for a stretch, Green threw Virtanen right back out there, and he rewarded his coach for the chance.

There’s a new fighting defenceman in town, and it’s not who you might think it would (and by would I mean should) be.

Guddy? Del Zotto? Anyone? Ah forget it, Troy’ll handle it.

Yep, that’s little Troy taking on Ryan Strome and acquitting himself pretty well for that matter.

I’m hoping the SixPack Superstar can become a regular staple in the SixPacks this season.

Now that may or may not happen because I have no idea what the future holds, but here’s Saturday’s SixPack Superstar:

That’s Ben Hutton going end-to-end on the rush in game one.

Now, I’m not sure if Green or Hutton deserves more credit for this, because I’m pretty sure Hutton would’ve been benched by Willie for an audacious play like this last season.

Let’s give it to Hutton, though, just because Green’s got enough love in this SixPack already.

6. Where you at Canucks Nation?

Let’s just pretend for one night you’re all this optimistic.

Enjoy it. Have fun. Don’t even think about what happened after last season’s 4-0-1 start…

Remember, we’re in Green’s world now, and it’s a fun place to be.