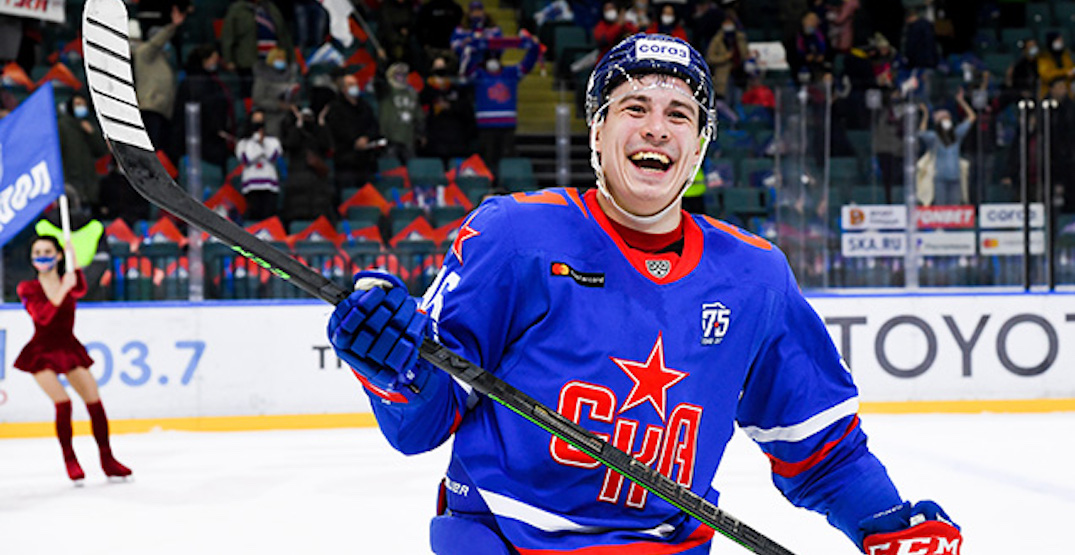 The Andrei Kuzmenko sweepstakes are heating up, as the most highly-coveted free agent outside the NHL assesses his options.

The highly-skilled Russian winger arrived in Los Angeles last week and is set to meet with shortlisted teams according to Rick Dhaliwal of CHEK.

Kuzmenko will speak with the Canucks this week in Vancouver, as first reported by Dhaliwal, and he’ll also meet with the Edmonton Oilers and two other US-based teams, according to TSN’s Darren Dreger.

His decision will be made in the next 10 days, Dreger adds.

Busy week for free agent, Andrei Kuzmenko. Interviewing this week with Edmonton and Vancouver as well as 2 US based clubs. Kuzmenko is hoping to making his decision in the next 10 days.

Kuzmenko recently posted updates to his Instagram account in Miami and Detroit, so he’s getting a full tour of North America.

Kuzmenko, 26, scored 53 points in 45 KHL games last season, and many believe he could be an impact player in the NHL. The 5-foot-11 left winger is a free agent, but is only permitted to sign a one-year entry-level deal in the NHL — making him very affordable.

Consequently, there’s no shortage of teams lined up for his services.

Players in Kuzmenko’s situation often look to play somewhere where there’s lots of opportunity. That makes having winger depth a negative in this situation, as Kuzmenko may be looking for a place where he’ll be assured of getting lots of ice time.

The Canucks have been successful at adding players from Europe in free agency so far — which was a stated goal of GM Patrik Allvin after he was hired in January. The Canucks signed defenceman Filip Johansson earlier today, and inked centre Nils Aman last week — both free agents from Sweden.

Fresh off a trip to the Western Conference Final, the Oilers can offer something no other team can: a chance to play with Connor McDavid and Leon Draisaitl.