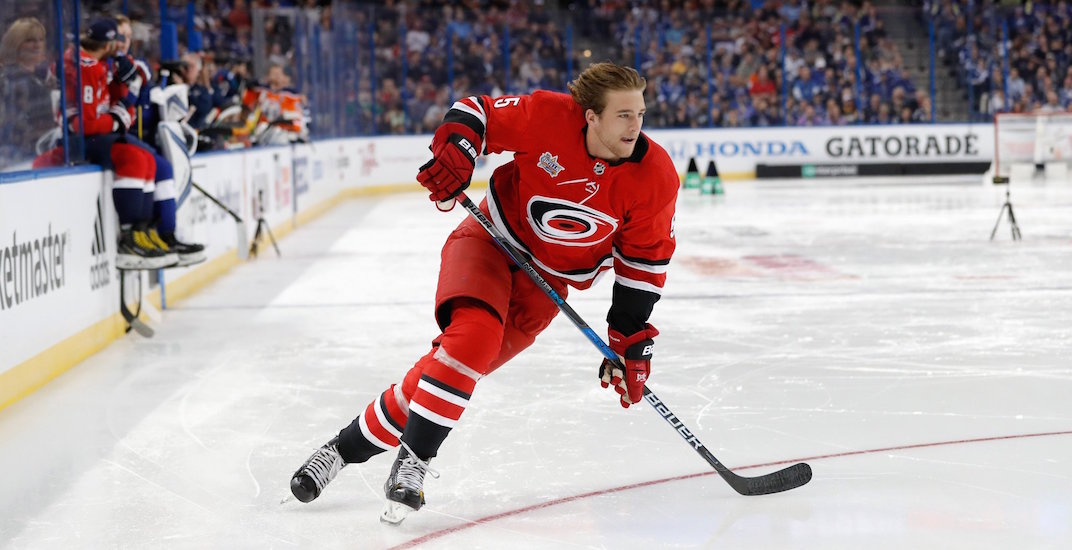 There’s a good reason for that, he’s one of the best insiders in the business.

In the latest instalment of 31 Thoughts, Friedman had just a quick mention of the Vancouver Canucks, but boy was it cryptic:

The word “stealth” can be defined as “cautious and surreptitious action or movement,” so don’t go ordering your Hanifin Canucks jerseys yet. But Friedman wouldn’t link him to Vancouver if there wasn’t something there.

On the surface, acquiring Hanifin makes a lot of sense for Vancouver. Listed at 6-foot-3 and 206 pounds, the fifth overall pick in the 2015 NHL Draft is exactly the type of defenceman the Canucks covet. Just 21 years of age, the smooth-skating d-man has tremendous upside and already has an NHL All-Star Game under his belt.

So the left-shot Boston-born blueliner is a good fit for the rebuilding Canucks, but at what cost?

As a non-playoff team, you might think that Carolina would be a build-for-the-future type of team. But having missed the playoffs for nine straight seasons, the Hurricanes have more prospects than patience. If they’re trading Hanifin, there’s reason to believe it’s for the here and now, which is difficult to do because Hanifin’s already really good.

Hanifin led all Carolina defencemen in points last season with 32, including 10 goals. He also led Hurricanes blueliners in Corsi-For percentage (56.19), which is a great indication of his overall game.

A restricted free agent, Hanifin is well set up to earn a sizeable pay increase from the $925,000 annual salary he earned on his entry-level deal.

The Canucks have the cap space to fit in Hanifin’s contract, but finding the right pieces in a trade that would catch the eye of the Hurricanes seems unlikely.

A trade made up of high draft picks or top prospects should be a non-starter for a team in the Canucks’ situation. But perhaps the Hurricanes are after something else.

Carolina also has a new outspoken owner in place in Tom Dundon, as well a new general manager, in Don Waddell. That’s usually a recipe for making a splash, and a deal involving Hanifin certainly would qualify as that.

The Canucks could part with Chris Tanev or Alex Edler, though that would require some manoeuvring around their no-trade / no-movement clauses, and it’s debatable if either one of those players would be an upgrade on Hanifin. Carolina is loaded with good, young defencemen, so perhaps they’d prefer a forward back anyway.

Brandon Sutter had his best offensive season with the Hurricanes earlier in his career, but that won’t be close to enough to get a deal done. Maybe Sven Baertschi tickles their fancy?

What about the size, grit, and leadership of Erik Gudbranson? The crafty two-way play of Markus Granlund? Loui Eriksson was a good player once?

They need a goalie, how about Jacob Markstrom?

If the Hurricanes are smart (Waddell’s their GM, so…), they won’t say yes to a deal with the Canucks unless it involves a name like Bo Horvat, Brock Boeser, or Elias Pettersson. Hearing those names should cause Jim Benning to hang up the phone, but that’s why this rumour is so puzzling.