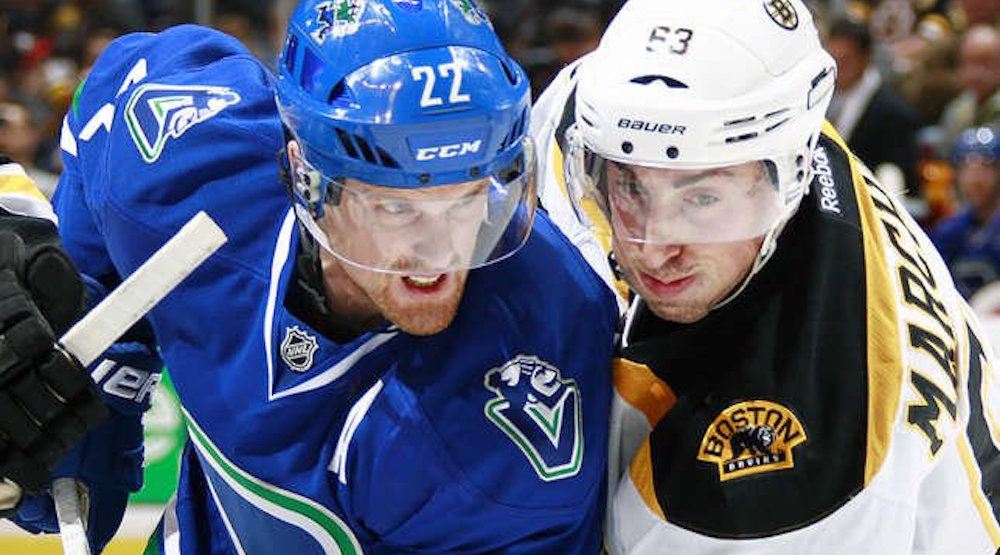 Is this some kind of sick joke?

Not long after Henrik and Daniel Sedin announced their retirement, speculation began for who the Vancouver Canucks would pick as their next captain.

Most observers believe that 23-year-old centre Bo Horvat is the heir to the throne, although you can make the case for other players or even going a year without a captain altogether.

Nobody has suggested Brad Marchand, the most hated player in the NHL (and especially in Vancouver) yet, because he doesn’t play for the team.

But that didn’t stop one local betting site from trolling Canucks fans everywhere.

PlayNow.com, an online gambling website owned and operated by the British Columbia Lottery Corporation, is offering odds for who the next Canucks captain will be.

While most of those other options are terrifying in their own right, they won’t make your stomach turn as much as the next player listed.

Yes, Marchand is a 100-1 long-shot to become the next Canucks’ captain.

A few thoughts went into my head reading this.

First off, very cheeky PlayNow.com – I commend you on your trolling.

But while Marchand’s inclusion is clearly a joke, make no mistake, this is a real bet you can make. A $10 bet would pay out $1,000.

That begs the question, is 100-1 the best they can do? The number of things that would have to conspire for this to happen should result in million-to-one odds, shouldn’t it?

I mean… Jim Carrey’s character had a better chance with that woman in Dumb and Dumber.

Not only would the Bruins have to decide to trade Marchand, a star player on a good team who is beloved in Boston, they would have to get him to waive his no-movement clause. At that point, Marchand would have to agree to come to Vancouver of all places, which would seem like an odd choice from his perspective.

Unless BCLC knows something that we don’t?

Congrats on a great career to the Sedins. Two of the best play makers to ever play the game! All the best in retirement.

The Canucks would also need to be willing to give up a lot to get Marchand and face the incredible backlash from fans. Then management would need to have the audacity to immediately give the captain’s C to their new acquisition.

I mean, I know ‘Canucks captain Mark Messier’ was a thing that happened, but come on.

That honour goes to a pair of former Canucks captains. Trevor Linden – who would need to come out of retirement at age 48 to do it – and Florida Panthers goaltender Roberto Luongo are each listed at 500-1.

Well, I suppose there’s a chance.