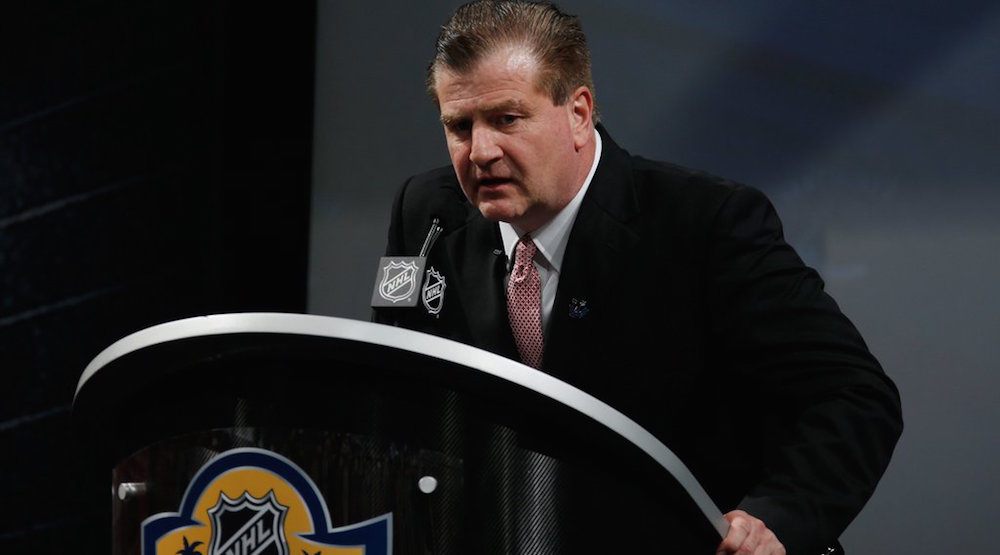 The Stanley Cup Playoffs are over and with the NHL Draft now less than two weeks away, rumours are flying.

For the Vancouver Canucks – current holders of the fifth-overall pick – there are a lot of ways they could choose to go.

Here are five things the Canucks could do at this year’s NHL Draft.

Benning might've confirmed #Canucks will draft a C at 5. Recognized want for D, but "To get a centre ice-man, a playmaker, is what we need."

The Canucks were one of the worst teams in the NHL last season, and a big reason why was due to lack of goal scoring.

The team already has a decent group of prospects who can put pucks in the net (Boeser, Goldobin), but what they lack is a centreman who can create chances for those snipers.

With Henrik Sedin – one of the best playmakers of his generation – getting up there in age, it’s about time the Canucks thought about finding his replacement.

Two top prospects who fit that mold in this draft are Cody Glass and Elias Pettersson.

#Canucks are talking with Cody Glass & Elias Pettersson about further interviews next week in Vancouver.

Both prospects came to Vancouver for additional interviews, and Pettersson was even greeted by the Sedin twins.

Along with a playmaking centre, Benning has acknowledged the Canucks’ need for an offensive defenceman.

With all due respect to Miro Heiskanen and Timothy Liljegren, that directly describes the dynamic Makar. The Calgary native has drawn comparisons to Erik Karlsson due to his skating and playmaking abilities.

Making further connections between the two, the Canucks’ brass took Makar out for dinner after the NHL Combine.

Much of the talk around trading up has been centred around the Dallas Stars’ willingness to move the third-overall pick for an established player (more on that later), but a recent tidbit from Elliotte Friedman’s ’30 Thoughts’ column revealed the Canucks could have even bigger plans.

Watch New Jersey in the lead-up to the draft. There is a growing suspicion the Devils feel their greatest need is on the blue line, and there are some good ones they like (Miro Heiskanen? Cale Makar?).

Anyway, would GM Ray Shero take one of them at the top, or would he move down just a little bit, adding something else, if he knew he could still get what he wanted? Vancouver could use a centre, for example. The compensatory pick from Columbus for hiring John Tortorella (55th overall) is something they dangled to see if it could help them move, but so far, no dice.

Friedman said the 55th-overall pick isn’t enough, but would the 33rd get it done?

This seems like the perfect draft to move down from fifth overall. The players in the 3-9 range are all considered relatively even in terms of overall skill, and the Canucks have a number of needs to fill.

They could flip fifth overall to a team like, say, the Buffalo Sabres (who desperately need defensive help) for eighth overall and another draft pick or two?

It’s certainly worth exploring, especially if the Canucks are high on Pettersson and Glass, as there is a good chance one of those players would still be available at the eighth pick.

One of the most talked about (and controversial) topics lately surrounding the Canucks has been whether or not to trade Chris Tanev, and for what price?

Would he be enough (or close to enough) to pry the third-overall pick from Dallas? If so, it’d be crazy not to at least consider it.

Walking away from the draft with both a playmaking centre and an offensive defenceman would be huge for the rebuild, but is it worth parting with the Canucks best defender?

Elliotte Friedman on Tanev: price is going to be very high, doesn't think #Canucks want to do trade unless it's a great deal

Of course, it’s worth noting that with all this trade talk, even the stuff coming from reputable sources, that these trades are still unlikely. Picks in the top five are rarely traded in today’s NHL.

Heck, the last time a top-10 pick was traded was to the Canucks for Cory Schenider.

With the Expansion Draft having taken place days before though, this year could be different. Friedman mentioned as much on Calgary’s Sportsnet 960 this morning.

“I think there’s going to be a bomb or two in this one, I really do,” he said.

Will that bomb involve the Canucks? We’re less than two weeks away from finding out.