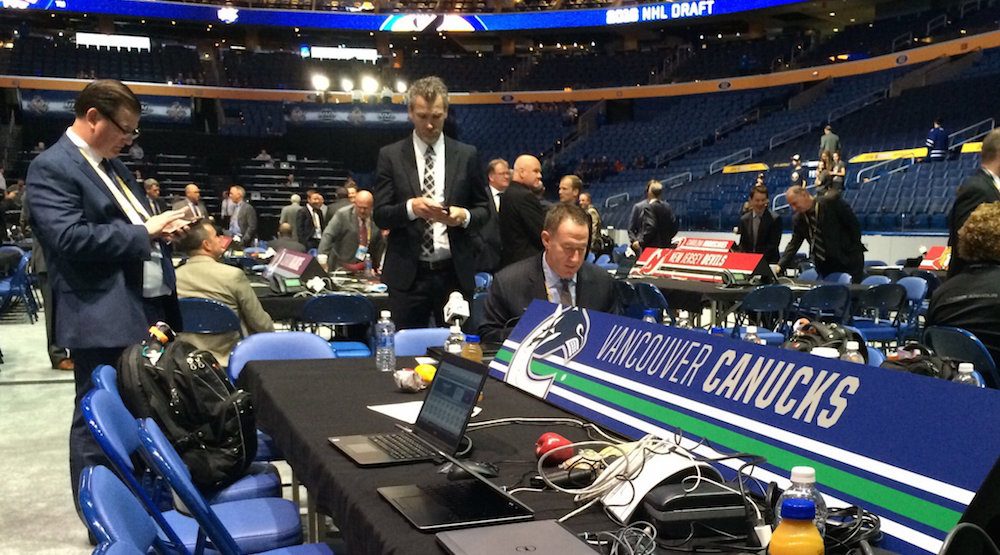 We’re just two weeks away from the NHL Draft, one of the most important dates on the hockey calendar.

For the Canucks, who are coming off another dreadful season and have finally admitted that they are rebuilding, this year’s Draft in Chicago it’s especially important.

Vancouver is more well stocked at this year’s Draft than they have been in years. If they hold on to all of their picks, they’ll have six selections in the first four rounds of the Draft for the first time since 1984.

The #Canucks now possess the following picks for the 2017 NHL Entry Draft pic.twitter.com/E9VgwH9lji

That’s a long time ago.

While that’s a nice change of strategy for the franchise, it speaks more to the Canucks’ reluctance to build through the Draft throughout their history.

Consider that since 1984, the Canucks have had three significant periods of futility: the mid-80s, the late 90s, and now. And yet there hasn’t been a will to load up with draft picks.

In short, when you miss the playoffs and need to rebuild, you should have more picks than everyone else.

Rebuilding teams need draft picks, and are well served to stock up on them. Well-run teams find a way to offload assets they don’t need for picks, while remaining competitive.

The Canucks famously went the first three rounds without making a single selection back in 2010 under Mike Gillis. While not something to get in the habit of, at least the Canucks were making a push for the Stanley Cup and had their most successful season in franchise history in the following season.

That’s a similar position that the Washington Capitals find themselves in this year, as they won’t pick until the fourth round.

Under Jim Benning, the Canucks have quite willingly traded picks away despite an aging and underperforming team.

They made seven picks in his first year as GM in 2014, but have already traded away two of them. The next year they drafted seven players and in 2016 they made just six selections.

Most alarming in the past two seasons was that Vancouver made just two picks in the first three rounds, having dealt away second-round picks both years.

This year, the Canucks won’t make any selections in the fifth and sixth rounds because of trades to acquire Philip Larsen and Emerson Etem. Both players, of course, have already left the organization.

While not having a pick in the fifth or sixth round might seem like a non-issue, consider that one of Vancouver’s most promising prospects, centre Adam Gaudette, was picked in the fifth round in 2015.

Vancouver finished with the second-worst record in the NHL last year, yet 10 teams are scheduled to have more draft picks than them.

The odds of finding NHL players decreases significantly the later you go in the Draft, but that’s kind of the point. It can be a crapshoot at the best of times, so adding picks gives you more room for error.

Take the Chicago Blackhawks, for example.

The Blackhawks acquired Patrick Kane and Jonathan Toews near the top of the Draft, but their work in the mid and late rounds was what ultimately pushed them over the top to win multiple Stanley Cups.

Corey Crawford was found in the second round, in a year they had two second rounders. Dustin Byfuglien was picked in the eighth round. Chicago picked 12 players in Rounds 1-7 of the 2004 Draft before they selected Troy Brouwer, who turned out to be the best of the bunch.

Niklas Hjalmarsson was one of three fourth-round draft picks. Marcus Krueger was found in the fifth round. Brandon Saad was Chicago’s second pick of Round 2. Andrew Shaw was a fifth-rounder, their eighth pick of the Draft.

The lesson here is that you don’t have to be perfect at the Draft if you give yourself enough chances. So while the Canucks are on the right track – though the second rounder for John Tortorella was a gift from above – they could and should still do more.

Benning needs to get creative. Trade a player like Chris Tanev for a high pick. See if anyone wants Ryan Miller’s negotiating rights. Trade down if possible to acquire more picks if you can get value for it.

They should look to sign free agents to one-year deals and flip them at the trade deadline to acquire more picks for next year’s Draft.

Get picks, develop players, and build your team the smart way.

According to NHL Trade Tracker, the Canucks have only traded down twice in their history in transactions that only included draft picks from a singular year.

The last time was in 2011, when Mike Gillis acquired a third and fourth round pick from Minnesota in exchange for a second rounder. Prior to that, you have to go back to Brian Burke moving from #1 to #2 in 1999 (the Sedins’ draft year), which allowed them to add a third rounder from Atlanta.

Compared to their own history, the Canucks are well set up for the Draft. But compared to the rest of the league, they haven’t exactly been making bold moves for a team in their situation.