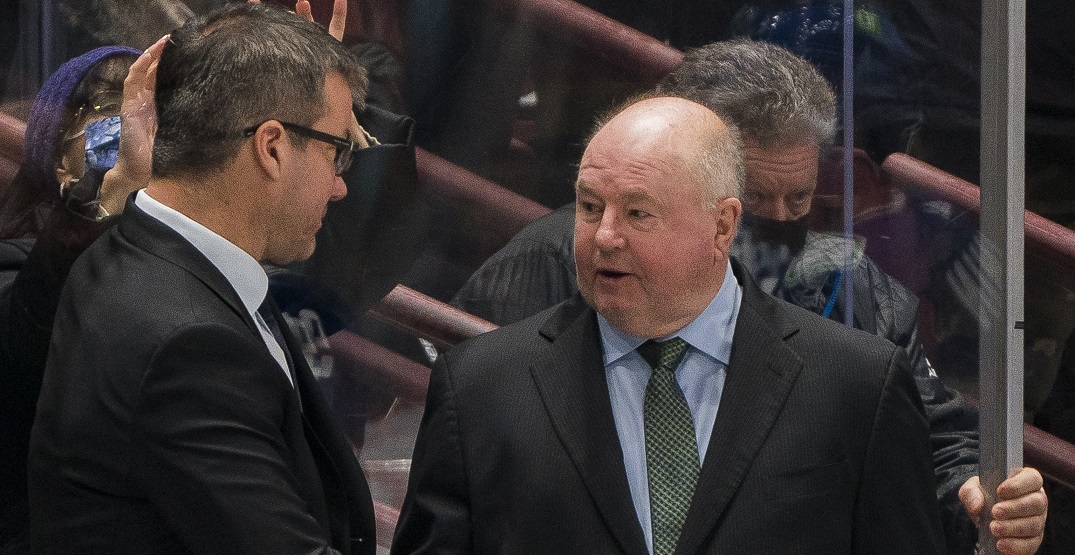 Jim Rutherford’s deal with the Canucks only requires him to be in Vancouver seven days a month, so most of the time Patrik Allvin is running the show at Rogers Arena.

It means the Canucks’ new GM has to get along with the Canucks coach, and Allvin and Bruce Boudreau haven’t exactly hit it off.

Allvin even went as far as to point out to Boudreau that Travis Green’s Canucks had better analytics.

Allvin has the support of Jim Rutherford, that much is clear after yesterday’s year-end presser. And by not offering Boudreau an extension, Canucks management is now daring its coach to leave.

Talked with Boudreau’s agent Gil Scott last night, who told me: “Everything [Rutherford] said about the contract was accurate. He finally decided to let those details out, so we shall see what the next week holds.”

Boudreau is not known as a systems coach with great structure, or a postseason tactician.

What he does well is manage and motivate people.

He also brought a lot of joy to Rogers Arena and Canucks nation by winning 65% of his games after being hired in December.

Now, would Boudreau be willing to amend his ways to greater align with Allvin and Rutherford’s preferred style?

It would be similar to Alain Vigneault changing from a defensive-oriented coach to an offensive one upon the arrival of GM Mike Gillis. You might remember that it led to two straight Presidents’ Trophies and a Stanley Cup Final appearance.

But is Bruce too proud for that? And is the damage already done? Does he feel undermined?

After all, that was an indictment from management yesterday. It took all of two minutes before the word “structure” was spoken, and it amounted to: ‘Style of play, bad. Thatcher Demko, good.’

Jim Rutherford notes that the zone exits particularly troubled him, in terms of his teams play.

Club barely even tried to exit with control under Boudreau, preferring to play punt and hunt.

Rutherford was trying to make a case that Boudreau still needs to convince him because he coached 57 games, not 82? Pretty threadbare reasoning.

I think it’s fair to assume that Allvin wants to hire his own guy, and I keep hearing Paul Maurice’s name as someone who is close with Rutherford.

What surprises me about all this is the capacity for failure and that this new sharp management group would put themselves in the crosshairs of ownership and the public all at once.

As one former Canucks employee said to me last night: “Jim and Patrik may well pay their Aquilini tax on this one.”

Because what are the chances of a successor winning more than 65% of his games?

What are the chances a successor inspires more joy, laughs, and good tidings towards the franchise?

What are the chances that the fans chant another coach’s name?

While replacing Boudreau with a newer school coach may well be the better long-term play, it invites all sorts of drama and discord to next season.

How happy do you think Bruce will be coaching what he knows will be his final year? How much of that will affect players?

And most ominously: What will be ownership’s reaction given their tendency to get more involved when things aren’t going well?

It’s a combustible mix and one that this management group has invited.

It strikes me as a first-time general manager rushing his fences, and not being wise to the politics.