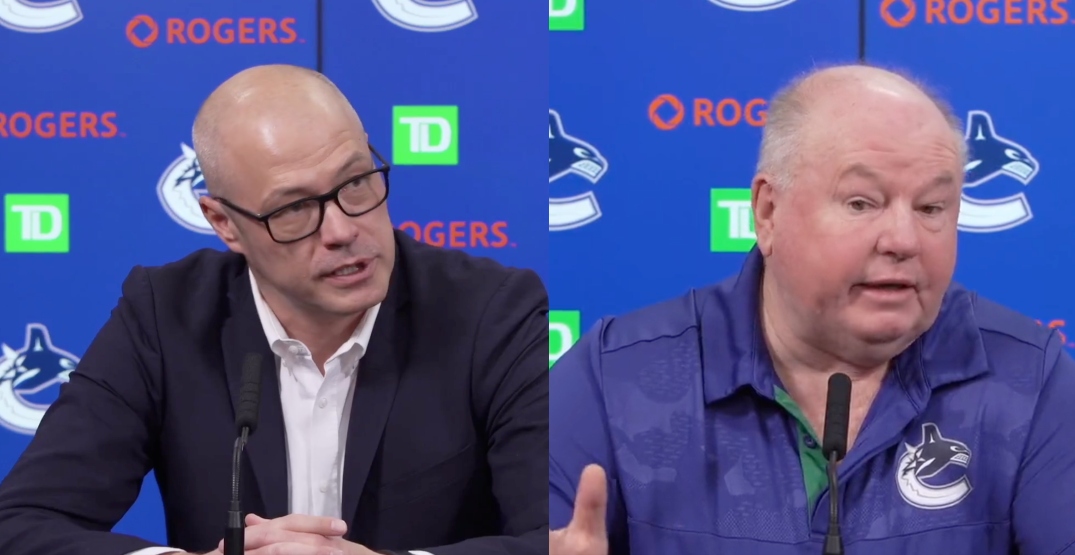 Has Bruce Boudreau coached his last game with the Vancouver Canucks?

That is the big question over the next month as the Canucks watch the Stanley Cup Playoffs and plot for free agency and the draft.

President of hockey operations Jim Rutherford said today that the team is not willing to extend Boudreau because he didn’t coach a full season — sounds like management still needs to be convinced.

.@mattsekeres: "I don't think Boudreau is Allvin's guy. In fact, I've had two people tell me that they don't get along. That Boudreau took some of Allvin's comments about the team lacking structure & good habits personally." #Canucks @NorthlandsGC https://t.co/7XLqtc2vNO

The Canucks want him back next season and are prepared to bring him back to coach out an option year that was initially agreed to by Boudreau’s representative and Canucks owner Francesco Aquilini.

Aquilini then went out and hired Rutherford, who in turn hired Patrik Allvin.

The ass-backwards way this went down had some risk, and today that was exposed.

I don’t think Boudreau is Allvin’s guy. In fact, I’ve had two people tell me that they don’t get along. That Boudreau took some of Allvin’s comments about the team lacking structure and good habits personally.

Jim Rutherford notes that the zone exits particularly troubled him, in terms of his teams play.

Club barely even tried to exit with control under Boudreau, preferring to play punt and hunt.

I think it’s also likely that ownership has not green lit an extension given that Rutherford said that “managing up” would be difficult if you’re paying several coaches not to coach, and they are already paying Travis Green not to coach after extending him last offseason.

Boudreau has until June 1 to opt out and pursue other NHL opportunities.

There may very well be some, in fact, one might have opened up today.

The Philadelphia Flyers are searching for a new coach with today’s announcement that Mike Yeo will not be back.

Boudreau’s offseason home is in Hershey, two hours away.

He may also be a candidate in Vegas and Toronto, should those franchises be looking for coaches this summer. It could be a very busy coaching carousel with perhaps one third of the league looking for new bench bosses.

Those who know Boudreau will tell you that the Maple Leafs represent his dream job, as a former player and a Toronto guy.

Rutherford warned that players who don’t listen to Boudreau will be gone before the coach — that no one will take advantage of his lame duck status and that an extension could come next year.

He acknowledged that he’d like an answer from Boudreau sooner rather than later, warning that the longer the decision lingers the more likely it is to become emotional.

My bet is that it’s emotional now.

You win 65% of your games, the fans are chanting your name, and a first-time GM isn’t convinced you’re the guy after the owner gave you his blessing in December.

Today is the day the Rutherford/Allvin honeymoon ended, with fans scratching their heads about what their team is thinking.