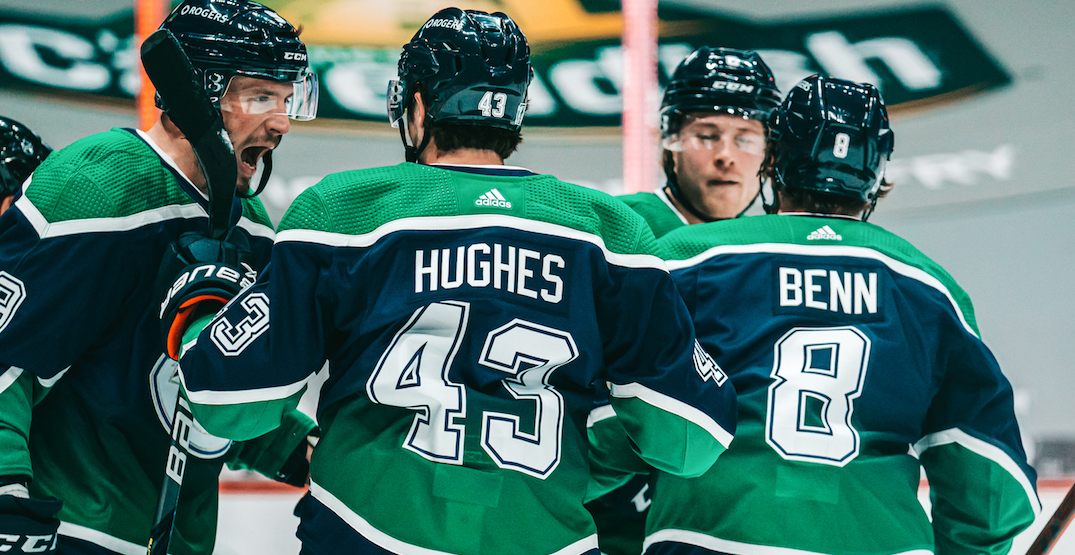 The definition of insanity is doing the same thing over and over again and expecting a different result.

So while the tweaks Travis Green has made to his lineup the past few weeks were subtle and sensible, the day after their most disappointing game in a while, it was time to really shake things up.

The lines at practice, shown below by The Athletic’s Thomas Drance, have been put in the proverbial blender.

New look #Canucks lineup based on the opening drill at practice.

J.T. Miller now finds himself on the third line, with rookie Nils Hoglander taking his place. Jake Virtanen has been elevated from the fourth line to the second line.

Antoine Roussel was dropped from the third to the fourth line, alternating with Jayce Hawryluk, which could mean Roussel is in position to be a healthy scratch.

On defence, it appears that Olli Juolevi will come out of the lineup for Travis Hamonic, who hasn’t played since suffering an injury on January 20. Hamonic is set to be reunited with Quinn Hughes, with Jordie Benn dropping down the third pairing with Tyler Myers.

All these moves come with the caveat that head coach Travis Green could go with a different look for tomorrow’s rematch against the Edmonton Oilers, but judging from his comments, I would expect big changes.

“I didn’t like the way we played last night, so you might see a few changes in our lines tomorrow and we did some game-like drills today,” Green told the media after practice.

If the Canucks aren’t in crisis mode yet, their fans sure are. Vancouver blew a 3-0 lead to the Oilers on Tuesday, losing 4-3 in regulation time. That drops their record to 8-13-2, putting them closer to the lowly Ottawa Senators than any other team in the North Division. Forget getting back to .500, they need to get to .400 first.

Green has been very upbeat about the way his team has played for the past seven games, in which they’ve gone 2-3-2, and he had reason to be. Despite the poor record, Vancouver was far better defensively, and deserved a better result in most of those games. But he wasn’t happy with Tuesday’s effort.

One player that has been in the crossfire of media and fans recently is Miller, the Canucks’ leading scorer last season who has been prone to turnovers this season. While he has 19 points in 20 games so far, Miller has shown his frustration more on the ice than any other Canuck.

“I want to be a better player than I’ve showed so far,” Miller admitted, though he said he wasn’t going to apologize for showing his frustration, explaining that playing with an edge is part of what makes him successful.

Part of the issue with Miller could be related to ice time. Miller has added penalty killing to his list of responsibilities since Tyler Motte was lost to injury, causing his average time on ice to spike — in part because the Canucks are the most-penalized team in the league.

Miller has averaged 22:10 in the eight games since Motte has been out of the lineup, playing over 22 minutes in six of those games.

“I’ve got to do a better job managing his ice time. I think I’m giving him too many minutes,” Green said.

Green likes what he’s seen from Miller on the PK so far, so he’s going to reduce his minutes in other areas.

Playing Miller on the third line should help keep his minutes in check, but it also gives Virtanen and Adam Gaudette — two players mentioned in trade rumours recently — a better chance to succeed. Virtanen, who has just one goal after scoring 18 a year ago, gets a golden opportunity to stick with Bo Horvat and Tanner Pearson. And while Gaudette remains with Brandon Sutter, a centre who somehow still doesn’t have an assist this season, playing with Miller should help him.

The biggest move of all could be on the back end, with the hope that Hamonic can regain his top-four form. If he can, that should help Hughes, who has been exceptional offensively this year, but poor in his own end.

The hole the Canucks have dug for themselves is deep, and it will take improvement in a number of areas to get back into the mix for a playoff spot with just 33 games remaining on their schedule.