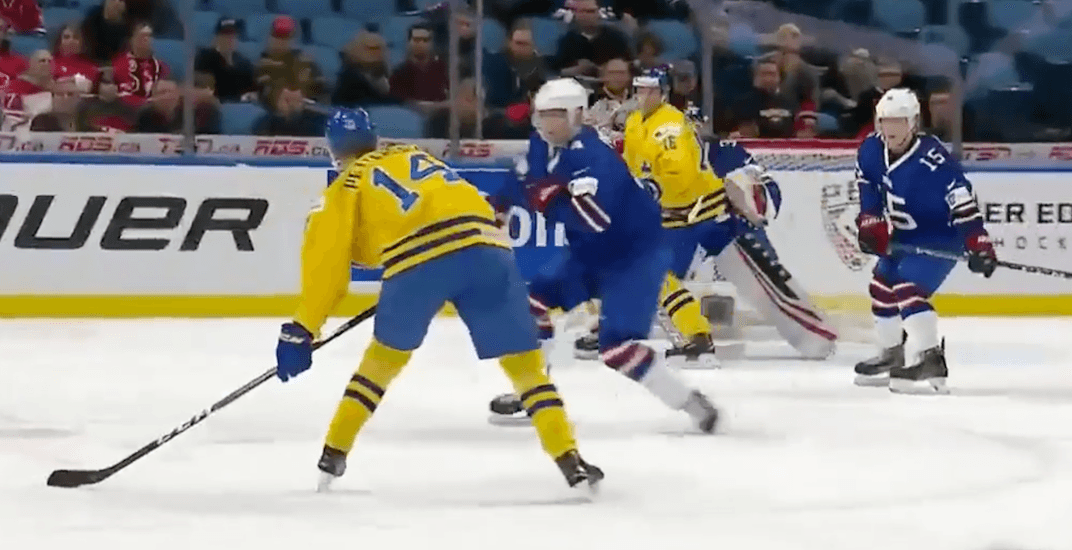 Here’s another one for the highlight reel.

It’s been fun for Canucks fans to watch (from afar) the progress of Elias Pettersson this season.

Scoring at an elite rate against men in the top pro league in Sweden, the 19-year-old Canucks first-rounder is showing signs that he could become a special player one day.

His talent has been on display for the last two weeks on Canadian television, playing for Sweden at the World Juniors in Buffalo. He’s been impressive offensively, particularly on the power play where he has displayed a lethal shot.

On Thursday Pettersson scored Sweden’s opening goal, helping his team to a 4-2 semi-final win over Team USA. He beat American goalie Joseph Woll with a bullet of a wrist shot in the second period.

.@Canucks prospect Elias Pettersson opens up the scoring for 🇸🇪@Trekronorse🇸🇪 for his 5th goal of the tournament.

While his name didn’t appear on the scoresheet for the rest of the night, he nearly set up his teammate for a goal after a beautiful between the legs move in the third period.

He also had this gorgeous soccer-style back-heel pass in the first period:

#Canucks prospect Elias Pettersson with a ridiculous back heel pass for 🇸🇪 just prior to the end of the first period.

With five goals and seven points in seven games, Pettersson now ranks tied for third in tournament goal scoring, and sixth in points.

Sweden will play in the gold medal game on Friday (5 pm on TSN) against the winner of the other semi-final, between Canada and the Czech Republic.