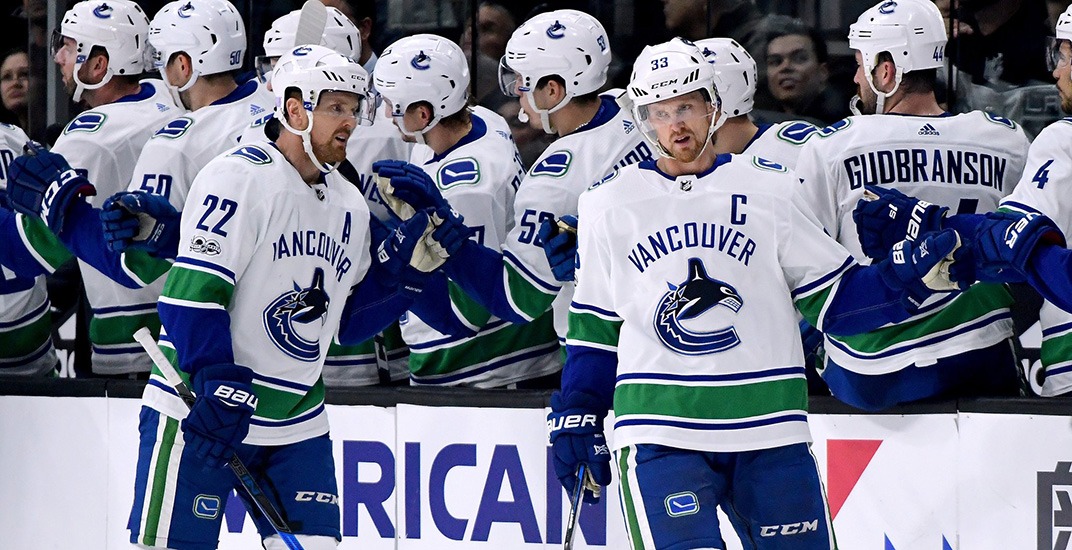 This one was off the rails early. Twenty-three seconds in, L.A. scored, and it was not a pretty goal.

Gaunce took a penalty, the Kings scored four minutes in, and all of a sudden it was 2-0 and Vancouver had barely had a chance to play at even strength.

And as all this was happening, a Twitter storm was brewing between old-school and analytics that threatened to end #Canucks Twitter forever.

iMac lobbed the softball in there, surely knowing where this would lead.

I do care what analytics say about Derek Dorsett. I know also there’s no way to rate what he just did, fighting a bigger guy to try to rouse the #Canucks after they fell behind 1-0 at 23 seconds.

They bit. Of course they bit. And who else?

Canucks have surrendered a goal and the Kings have out-attempted them 13-2 since that fight. https://t.co/0pyN8JzFoH

But just then, iMac went off script.

I suspect four minutes of LA PP may have had something to do with both factors, no? https://t.co/teNgUoF46X

That certainly does have something to do with it, but if the Canucks are roused by a pointless staged fight, power plays or not, there’s no evidence to suggest that’s the case.

That was a… level headed, strong, analytics-based take from the cagey vet.

Well, that’s score effects for ya. And since you brought up how there’s no way to rate how Dorsett getting into a fight would rouse his teammates, I’d imagine that made it a part of the conversation, yes.

And just like that the first period was over.

The amazing thing was that while all this was going on, Vancouver was quietly out-playing L.A. At the end of the first, even strength shot attempts were 14-5 Canucks. The signs of life were there.

Five minutes into the game I was still staring at this wondering how the puck went in on Nilsson.

Meaning I was still watching that as Dorsett fought, and as this one went in.

I did look up long enough to notice Gudbranson’s lack of taking that man in front of the net.

Now, since Gudbranson’s quickly becoming our new Sbisa, I’m going to leave the Guddy takes for another night.

That was the first period – down 2-0 to the Kings, me texting Rob to please take this crappy SixPack off my hands (he laughed in my face and told me to suck it up, by the way… don’t think I’ll forget this, Robert).

If you were watching closely, Canucks fans did see one cause for excitement in the first – a first unit power play that featured the Sedins, Horvat, Boeser, and Edler.

Yes, Vancouver’s five best power play options were finally united on one line. Four forwards, one D, shooters, passers, net front presence – it was all there like the fans and media had drawn it up four weeks ago.

They looked good too. On the first power play of the game they created scoring chances, and this:

That was Henrik, missing a gaping net, that close to scoring a power play goal in the first.

Early in the second, his work finally paid off with this nice bounce.

And then the power play.

Just look at what having shooting options does to Henrik’s effectiveness. Before laying that sweet saucer pass over sticks all the way to Boeser, he can go to Daniel in the middle, Edler at the point, or maybe jam it on net for Horvat to hammer away.

The only question is, how did this not happen sooner?

We shouldn’t be too upset, though. We’re 18 games in, the Canucks have already gone through about six power play configurations, and they’ve hit on one that works.

At this point last year, they were still on their first power play configuration.

At the 82 game mark last year? They were still on their first power play configuration.

Didn’t see this coming, but Loui Eriksson has played great since returning from injury on Saturday.

Against the Kings, he led the Canucks in ES shot-attempt differential at plus-10. Not only that, he energized the Sedins like a young Burrows, or the Honey Badger once did.

This was shorthanded, but who is this guy?

Not sure what happened during his injury rehab. Whatever he did, the Canucks should package and get the entire roster on it.

This guy’s not wrong.

Most of your in-game live tweets are too long to read now. I’m trying to watch hockey here.

iMac elaborated on his Dorsett take with Murph in the second intermission:

“The debate about fighting is a very legitimate and serious discussion. The fact of the matter is the NHL still allows fighting. This is Derek Dorsett, who had career threatening surgery last year, putting himself at risk – not for himself but to help his team – to help all those players on the team who are part of a team that’s down 1-0 after 23 seconds.

Now, did it have an effect? I don’t know, the Canucks are playing very well tonight, but the fact is Derek Dorsett was willing to sacrifice himself to try and help his team, and that’s something, alas, that is very difficult to rate.”

And Auld weighed in too.

You can argue whether you agree with fighting or not, but I can undeniably tell you that it has an affect on the bench. I’ve yet to see an advanced stat that can measure that.

They’re not wrong – it’s hard to rate the effect a fight has on a team, especially when, as iMac puts it, it’s heart-and-soul Dorsett laying his body on the line after coming back from a serious neck injury.

At the same time, it’s not that hard to measure shot totals or goal totals of teams after fights in different situations. In fact, I’m quite sure Cam Charron did some work on this back around 2011 (and I’m sure many others have as well), and it showed fighting had no discernible effect.

Still, good points by all, and the best part was iMac not letting this devolve into a mud-slinging competition with Canucks Army.

Now, JD created a bit of a shitstorm Saturday with this tweet:

His point: if you look at the underlying numbers, Dorsett hasn’t been as good as many are making him out to be.

As you’d expect, JD’s tweet prompted a bunch of responses. Then came Andrew Walker with the haymaker.

To say Dorsett has played terribly is everything that’s wrong with advanced stats. He has played wonderfully, helped contain elite players and has 7 goals to boot. He has literally been excellent. Full stop

There was Walker, Simmonsing it up, turning hockey discussions into analytics vs. eye-test when that didn’t need to happen.

Walker was on the air Sunday afternoon with Jawn Jang, and he added this to his original take:

Here’s the problem. There’s this community that right now would go to the woodshed and say ‘Derek Dorsett has been bad’. So you’re telling me Jim Benning and Trevor Linden and Francesco Aquilini and Travis Green are disappointed with how Dorsett has played this year? Are you high? What are you smoking?

I’m not saying it’s going to continue. That’s not the point. Derek Dorsett has played above his head, sure, fine. But who cares? It’s done. he’s been great. If we’re going to predict his next 60 games, that’s a different conversation.”

You know who loses the possession battle to Henrik Zetterberg and Tyler Seguin and Connor McDavid? Everybody. Because they’re all stars. That’s the thing. The goal is, if you can lose it slightly or at 5 on 5, actually not get murdered where it counts in the back of the net, you’re doing fine.

…When you can have a guy like Dorsett and Sutter, who, newsflash, they’re not your best players, and all of a sudden they’re holding their own against a good lines of another team, and, lucky or not, putting in a few goals, how is that a bad thing?

This is my big problem with it. How can you look at how Dorsett has played to this point and be like oh that’s really disappointing. Disappointing? Give me a break. That’s why I’m done with this conversation. I think it’s so ridiculous.”

My first thought: Walker needs to slow down there and realize JD does not represent all analytics people. Does Walker believe his own view represents everyone who “watches the game”? No, – there are many, many ways of both looking at the game and evaluating the data.

JD, by the way, has had some strong takes based on his analysis of the data in the past: Philip Larsen was not bad, Burmistrov is a solid player – he picks his own, often unique, often perplexing hills to die on.

Second thought, and this surprised me because at first blush I was just laughing at Walker’s closed-mindedness: the core of Walker’s argument is pretty much what I said when I read JD’s tweets: two things we need to look at – who he’s played against and who he has played with.

Walker may be floored to realize the answers to those questions, can be found by drilling further into the data, rather than through a bogus, biased “eye test” argument.

This graphic, from hockeyviz.com shows how much Dorsett has played with players on his own team and against those on the other team. The “1”, “2”, “3”… represent the top three players, by minutes played, on the opposing teams, and the red line allows us to compare his ice time to the league average ice time against these players. 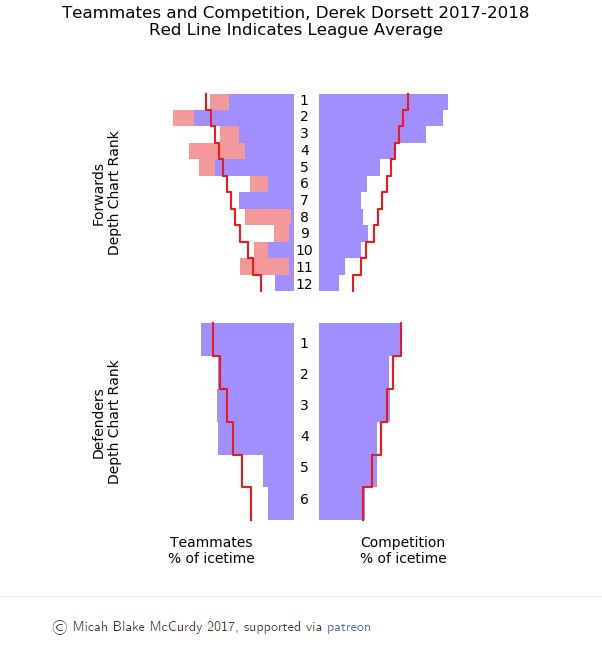 You can see Dorsett has played more than his fair share of ice time against the opposing team’s top lines. Looking at that same graphic for Horvat makes what Dorsett has faced much more evident. 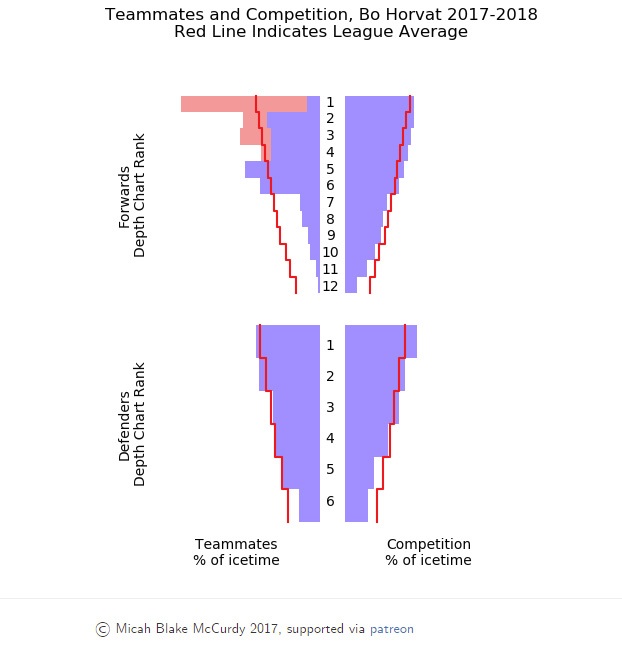 See, what Walker didn’t realize is he was making a valid QoC-based (Quality of Competition) argument. There is no more analytics vs. eye test except to people who are stuck in 2011, those trying to create a splash on Twitter and the radio (this, I suspect, is Walker), or the willfully obtuse.

The stats and numbers are an addition of a mass of underlying data, and no analytics guy does not actually watch the games. They all do.

The thing about the stats is they can help us see things we can’t see with our bare eyes.

In this case, while Dorsett’s scored a bunch of goals, he’s also been on the ice for many shots on his own net – that should change the colour of the argument “Dorsett’s been amazing.”

And while JD used shot-attempts to show Dorsett’s been bad, the QoC numbers help contextualize that.

One more thing Walker needs to understand: JD, or any one analytics guy making a statement, does not mean “an entire community” has those thoughts.

Now just imagine instead of dismissing all analytics as ridiculous or a waste of time in hockey, Walker used his not-ridiculous arguments against someone else’s theory to probe and look further?

No one’s saying he doesn’t know hockey. Looking at the data would only help.

And the condescending “Are you high? What are you smoking?” stuff? It might’ve won listeners over in Toronto but Vancouver’s all-in on analytics. That won’t play well here.

Note: Thanks to Ryan Biech for his help with some of the lovely gifs used in this SixPack