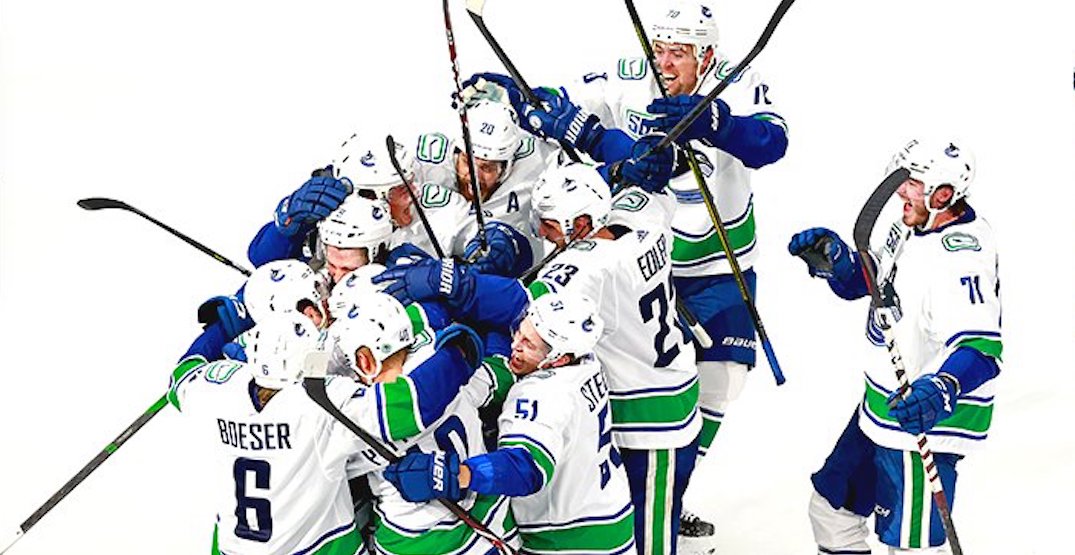 After five long years without a sniff of playoff hockey, the Vancouver Canucks were handed a doozy of a match-up for their return to the playoffs.

If they’re going to go past Round 1, they’ll need to knock off the defending Stanley Cup champion St. Louis Blues.

With the Canucks entering the series as decisive underdogs (even if they are a sexy upset pick), here are seven things to watch for as they prepare to battle the Blues.

1. Will Binnington eat his words?

It’s hard to believe that Blues goaltender Jordan Binnington can come out of nowhere to win the Stanley Cup, and still care about this:

In 2019, Elias Pettersson became the second rookie in Canucks history to win the Calder Trophy, finishing ahead of Rasmus Dahlin and the aforementioned Binnington.

Both players come into this series as difference-makers for their teams. Whoever is the biggest difference-maker between the two of them could go a long way toward determining the final result.

2. Could fatigue become a factor for either goalie?

With the schedule condensed for the playoffs, you have to wonder if this will be a storyline for a number of teams.

We usually rarely see back-t0-back games in the playoffs, but the Canucks and Blues will do just that when they play Game 3 on Sunday and Game 4 on Monday.

In Game 4 of the series against the Wild, you could argue that fatigue was a factor in Markstrom’s mediocre performance. Both teams have backup goalies they trust in Jake Allen and Thatcher Demko but having either of them start is probably not an ideal scenario for either team.

3. Will Hughes continue to lead the offence?

The play-in series was the first time where we got to see the Canucks young core strut their stuff in meaningful postseason games.

However, it wasn’t Pettersson or Brock Boeser that led the Canucks in points against Minnesota. It was the Canucks rookie phenom on defence, Quinn Hughes.

Hughes posted a goal and six points in four games to lead all Canucks. However, it was Games 3 and 4 where he really elevated his play, with five of those points coming in the final two contests.

Only Connor McDavid, Ryan Nugent-Hopkins, Sebastian Aho, and Jonathan Toews had more points than Hughes did during the play-ins.

4. Will defence be the Canucks’ kryptonite?

As great as Hughes is, the defence is clearly the weak spot on this hockey team.

Even though the Canucks didn’t allow an even-strength goal until Game 4, their underlying numbers for shots and chances against were still in the bottom half of the league.

They often got overworked in their own zone, which led to a number of penalties against. Now, the Blues aren’t as dangerous offensively as the Vegas Golden Knights or the Colorado Avalanche, but the Canucks won’t set themselves up for success if the Blues are able to grind them down in their own zone.

5. Can they stay out of the penalty box?

Tyler Myers has taken 7 penalties in 52:14 of ice time in this series so far

During the regular season, only three teams had a better power play than the Canucks. One of those teams was the Blues.

The Canucks are already underdogs. They don’t need to give the Blues an extra advantage by taking dumb penalties.

6. Will any depth players emerge as an X-factor?

This is an area where the Blues seem to have a clear advantage.

There’s a wash with star power when you compare Pettersson, Boeser, and Hughes to Ryan O’Reilly, Vladimir Tarasenko, and Alex Pietrangelo. However, the Blues’ depth on defence and at forward is an advantage on paper.

That depth was a big reason why they won the Stanley Cup last year, and it was a factor for the regular-season success in 2019-20. St. Louis had 11 players who hit double digits in goals, whereas the Canucks had seven. One of those guys, Adam Gaudette, appears to be on the outside looking in for Game 1 of this series.

Simply put, the Canucks need depth players to step up and be an X-factor if they want to win this series. Brandon Sutter was one of the most notable Canucks in the qualifiers. Tyler Motte was also a spark plug.

Can Jake Virtanen, who scored 18 goals but sat as a healthy scratch for to start the series against Minnesota, be an X-factor?

Contributions from one or more of these guys will be even more important if Tyler Toffoli is still unable to play.

7. Is the Blues’ recent poor play a mirage or sign of things to come?

St. Louis was No. 1 in the Western Conference when the NHL hit pause on the regular season in March. However, after a terrible round robin performance, they slipped from first to fourth after three straight losses.

Is this a team that can flip a switch and get back to the type of hockey they played last year, or will this weird bubble format prevent them from having the same intensity that they showed in last year’s playoffs?

8. Can the Blues reverse playoff woes against Vancouver?

I’ll preface this by saying that history doesn’t really mean anything. However, history is on Vancouver’s side heading into the fourth playoff series between these two teams.

The Canucks are 3-0 against the Blues in their previous three playoff matchups. They swept the Blues during their last meeting in 2009, when Alex Burrows scored the overtime winner in Game 4. The other two meetings in 1995 and 2003 both went seven games, with Markus Naslund leading the comeback in 2003 after the Canucks went down 3-1 in the series.

Perhaps the Canucks can look to the 1995 team for inspiration as well. That team was mediocre in the regular season, and ended up against the third-best team in the league in St. Louis. However, they still pulled off the upset on the heels of 12 points in seven games from Pavel Bure.

One of the Canucks young stars might have to have an equally dominant series if they’re going to pull off the upset.