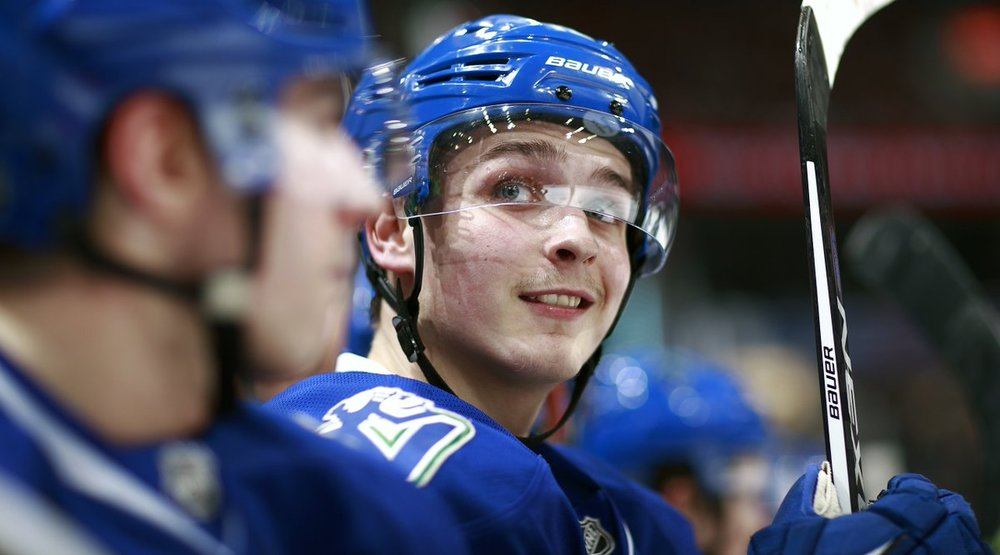 The time is now.

When it comes to the injury bug, the Vancouver Canucks have not only been bitten – they’ve been devoured. Even with Brock Boeser apparently ready to play on Tuesday, their lineup is depleted. In their last game against the Calgary Flames, the Canucks were missing six regulars in Bo Horvat, Sven Baertschi, Brandon Sutter, Erik Gudbranson, Chris Tanev, and Derek Dorsett.

When it rains, it pours.

One player who has a chance to shine through this dreariness is Jake Virtanen.

The at times much-maligned forward has had an inconsistent start to this NHL career. After being drafted sixth overall in 2014, Virtanen has split his time between the Canucks and Utica Comets. He has played 95 NHL games (10 goals and 11 assists) and 67 AHL games (nine goals and 10 assists). While he’s been scratched for a few games this season, he seems a lock to stay with the big club for the rest of the season especially considering the injuries.

Virtanen has all the makings of an effective player. He’s a big body, a strong skater, and not afraid to go to the dirty areas. With age, his hockey sense is improving.

And with key forwards out of the lineup, the 21-year-old has a chance to fill in some of the important ingredients.

Virtanen is third on the team in Corsi (5-on-5 shot attempts) at 50.6%. That means that when Virtanen’s on the ice, the Canucks attempt more shots than they give up – something that only three other Canucks (the Sedins and Derrick Pouliot) can lay claim to.

Looking ahead to the future, the Canucks expect an influx of young forwards to compete for roster spots in the next couple of years: Elias Pettersson, Jonathan Dahlen, Kole Lind, Jonah Gadjovich, Adam Gaudette, and others.

The time for Virtanen to lay claim to an increased role on the team may never be as good as it is right now.

Of all the Canucks forwards who have dressed this season, Virtanen ranks 15th in average ice time, playing just 10:28 per game. This is mostly because Virtanen rarely sees special teams time. In fact, this season he’s only had 3:56 of power play time (contrast that to the Sedins who have over 100 minutes apiece) and only 10 seconds of penalty kill time (lowest on the team).

When Virtanen is on the ice, however, he is very effective. He ranks ahead of every Canucks healthy body not named Sedin or Boeser in terms of points per 60 minutes.

Filling in the gaps

Virtanen can take a lesson from Horvat in the way he drives hard to the net, causing havoc for defencemen and goalies alike. Virtanen is getting better at this, sometimes being rewarded with a goalie stick to his face.

He can draw inspiration from Boeser’s scoring prowess. Virtanen has an outstanding release on his shot – especially his wrist shot. He needs to continue to find open ice near the net and let the puck fly.

And he can become the team’s new agitator in the absence of Dorsett. We saw some of this in the last game against Calgary in which Virtanen took three minor penalties. None of them were poor penalties however as the power forward was standing up for teammates and doing his best to get under the Flames’ skin.

Virtanen needs an opportunity – something that head coach Travis Green has appeared reluctant to give to this point. When and if he gets his chance, he needs to take advantage of it.

This may be his best chance.