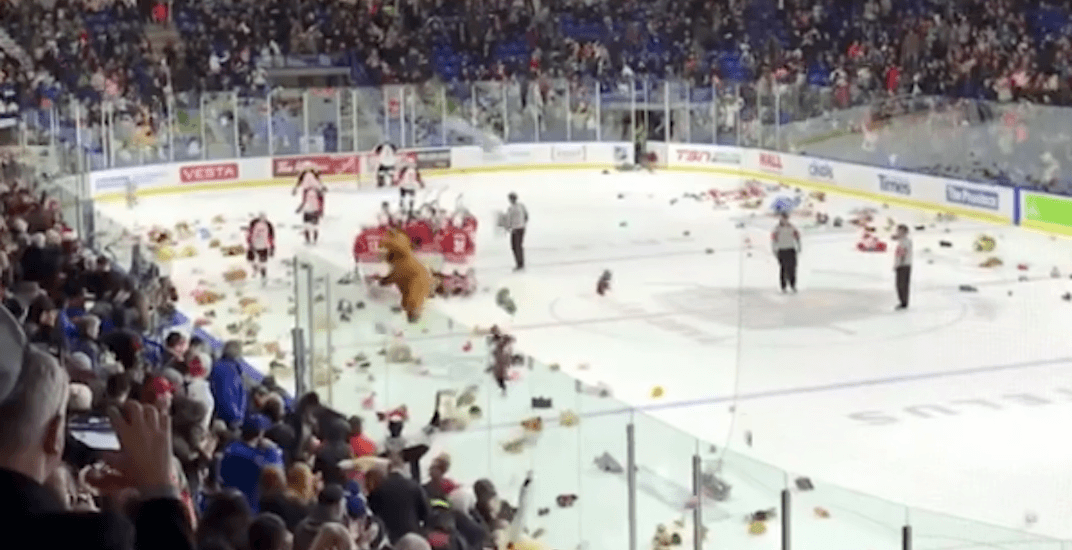 The 2017 teddy bear toss goal was worth the wait for Vancouver Giants fans at the Langley Events Centre on Sunday night.

Over 4,000 fans arrived to the arena armed with stuffed animals and toys, just itching to litter the ice with them. Fans had to wait longer than usual though, as rookie defenceman Bowen Byram scored the game’s opening goal at 11:31 of the third period.

The bench cleared as Byram’s teammates took to the ice to congratulate him as teddy bears rained down from the stands. It took 12 minutes before the game resumed.

The annual event benefits a great cause, as the stuffed animals are donated to the Lower Mainland Christmas Bureau. They’ll be given to children in need over the holiday season.

Ty Ronning added another goal, while goaltender David Tendeck recorded the shutout for the Giants (who were wearing special teddy bear jerseys), who beat the Prince George Cougars 2-0. It was Vancouver’s sixth win in a row, improving their record to 18-13-4.

The G-Men have moved up the standings, now sitting in a playoff spot as the third-best team in the BC Division behind Kelowna and Victoria.

Here’s some of the best videos of the teddy bear toss: