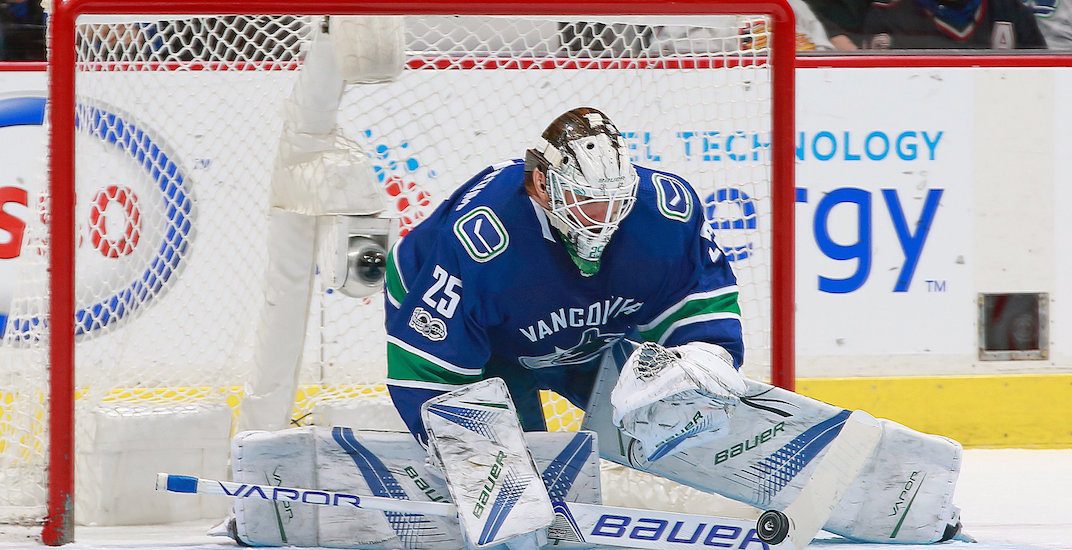 A long time coming. That’s a phrase that could’ve applied to Vancouverites waiting for the construction of the Burrard Street Bridge to finish.

Anticipating Markstrom’s first shutout? That was more like when life on Earth had to wait the Ice Age to finish.

He was just one goal away 19 previous times.

And then, finally, in game number 129 it finally happened.

Markstrom’s been asked about the streak and said he doesn’t think about it, but just look at that face when time expired. You can see how big his smile was and you’re squinting at a 3cm wide gif through a goalie mask that’s about 2 mm wide on your screen.

After the game, Sportsnet’s Dan Murphy asked Markstrom if it’s nice to be able to finally say he has a shutout.

His response: “I don’t know. The most happy I am is to stop getting the question from you guys, that’s what I’m going to be most happy about.”

Yeah, when you go 115 starts without one, you’ll get asked about it.

On Tuesday, the Canucks beat the Hurricanes 3-0.

Now let’s get back to talking about that shutout.

It sure didn’t look like it was going to go this way. The first 20 minutes was one of the worst periods Vancouver has played this season. And I watch every game, not just highlights, so I’m fully qualified to say that…

Shots in the first period were 12-3 Hurricanes. The shot attempts chart was like something out of a horror movie or any game during the Canucks 2016-17 season. 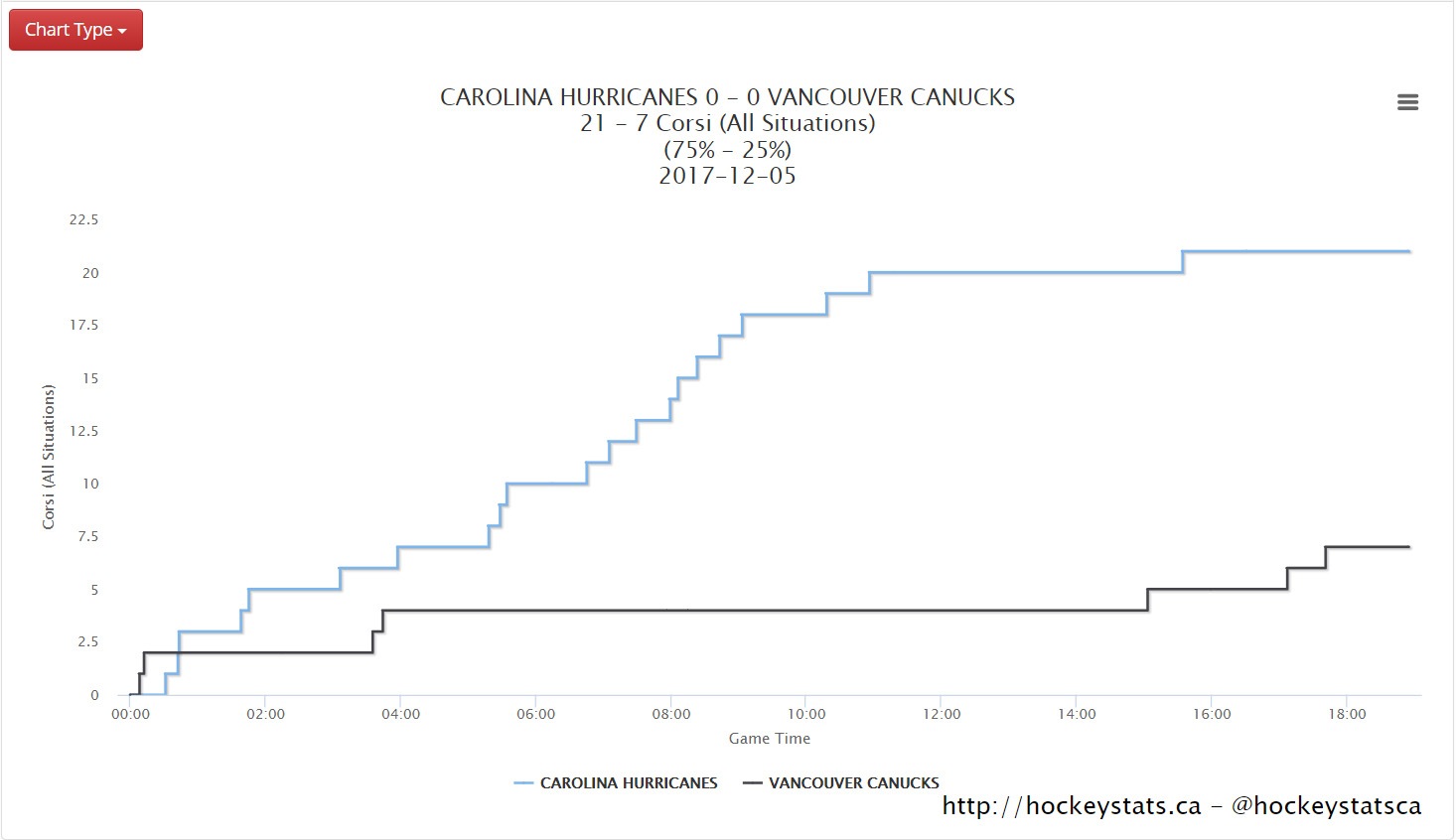 But Markstrom was ready.

He was ready for Williams.

He was ready for Faulk.

He was ready for the point shots.

And he was ready for Lindholm glancing it off the post.

Hurricanes power play? Markstrom had that covered too.

Luckily for Markstrom the team responded in the second, taking over the game and scoring two goals.

That’s when people started to talk.

And for once, for the first time in his career, none of the chatter mattered.

The Canucks had a big win and the Sedins only had one point between them. Among Canuck forwards, they played more than only Goldobin.

And they weren’t pass the puck to Brock and watch him score points, they were legit top-four defenseman with a scorer’s touch points.

First, his goal that got Vancouver on the board.

Crazy thing is he was even more confident and better after that Karlsson-like goal.

Watch him holding the line and making plays at the right point (near side) here.

Drew Doughty, is that you with that spinorama?

Yuge statement from Jang here, but maybe it’s not ridiculous. Tanev and Edler are likely not with the team in the long-term, so Pouliot’s importance will increase.

Still, they’re developing a a Finnish defenseman who was the fifth overall draft pick who everyone hopes will be more important.

Don’t know how much longer we’ll get to watch the twins do their thing, so when they’re doing it, make sure you take the time to notice.

This play. Man, if Boeser had scored on this power play, this would’ve been talked about for decades to come. Hope it’s not too small to see.

First, Henrik starts skating with the puck down the right wing before making it disappear into thin air. Actually he just made a crazy aerial pass over three Hurricanes’ heads that lands perfectly right on Daniel’s tape.

Daniel takes about 0.05 of a second to settle that puck down before passing it off the back boards right back to Henrik, who quickly passes it back to Edler, no doubt intending Edler to pass it over to Brock for an open one-time blast.

Again, if this had ended up in the net…

Look out for it again though – considering every player looks as if they know the puck is coming before it gets there, it was likely a set play they worked on in practice.

One more thing: many of you know I was in Nashville over the weekend. Two hockey-related takeaways from my trip:

1. While I wouldn’t say they’re as knowledgeable as all the hardcore Canadian hockey fans, everyone I talked to in Nashville is very aware of their hockey team and how it’s doing. That impressed me.

2. Everyone appreciates the Sedins. They call them “Hendrick and Daniel” in Nashville, and they fully understand that they’re incredible players. Same thing when I went to Chicago a couple years ago too, without the southern pronunciation of Henrik’s name.

Goldobin got his first goal of the 2017-18 season, and it sure looked like it meant a lot to him.

All him to get the first chance off the post, which he followed up with the second effort. No wonder he was so relieved.

Speaking on TV in front of thousands of Canucks fans for the first time? Wouldn’t know it watching Ryan Biech. He was cooler than the underside of a pillow.

Nope, no BC Bud. Just a guy who knows everything about every Canucks prospect. Seriously, he probably knows what colour Pettersson’s jock strap is.

So if he can’t be stumped, why wouldn’t he be chill?

Sorry to be a bringer of bad news in this incredibly positive SixPack, but Bo left the game halfway through the period after going into the boards awkwardly.

Could be a knee or an ankle. Either way, he’s kind of important to this team, so we’ll keep an eye on that going forward.

Great article by Dorsett himself today on the Canucks’ website, and by now I’m sure you’ve read it.

Question: if it starts out like this, is the article one giant subtweet at Andrew Walker?

If there’s one thing I want you to know, it’s that I don’t want anyone to feel sorry for me. If you could give me a script and say, “This is the story of your life,” I would do it over and over again, a billion times. Hockey gave me every opportunity I could dream of. I lived the dream every Canadian kid wants to have. I got to play in the greatest league in the world, in the greatest sport in the world.

Nah, it’s probably not, and that’s because I doubt Dorsett saw Walker’s tweets.

Anyway, this stuck out:

“I want to be clear: There were no stingers until that moment I woke up in Philadelphia.”

Now, while many out there attributed Dorsett’s re-injury to his fight against L.A., he said he didn’t feel a thing until a week later. In that span, the Canucks played against Vegas and St. Louis.

So was it that fight that did him in? Or was it something that got tweaked in his final game against St. Louis?

Really, Dorsett always played a rough, physical game, so whatever happened in his neck was probably going to happen as long as he kept playing the same way. And if he didn’t play that way? Well, as he wrote himself, he probably wouldn’t have been in the NHL in the first place.

Pretty awesome to see a Canadian kid exceed even his own expectations, working and playing his butt off to get to 500 games in the best league in the world.

Back to Walker, it appears Elliotte Friedman is a Canucks Army reader.

Elliotte to Walker: I don’t know what else you can do in life with the amount of hockey you claim you watch 😂😂😂😂😂😂😂😂😂😂😂

Walker admitted he may miss a game here and there but 90% of his free time is spent watching sports. 🤔🤔

Hey @jamessharman – I have a new too tight shirt. First in the West! pic.twitter.com/S7nVrwNrL6

Which sure doesn’t leave much time to watch all that hockey he claims to watch. 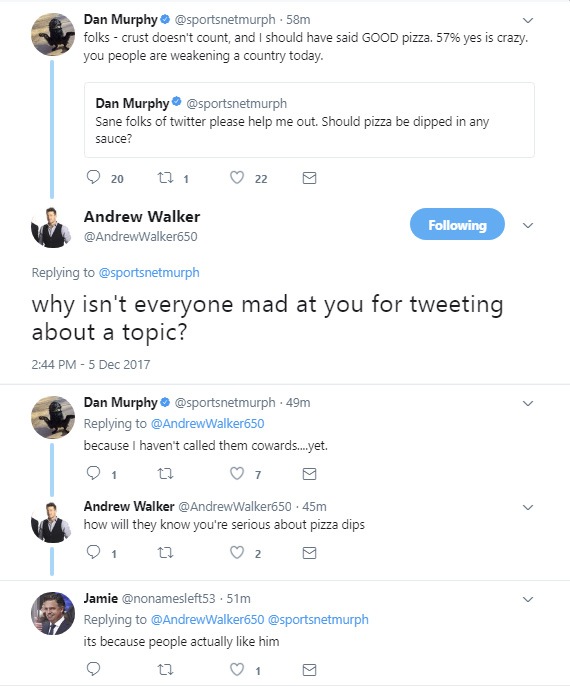 Told you the mic was being dropped.

Note: Thanks to Ryan “TV Superstar” Biech for his help with some of the gifs in this article