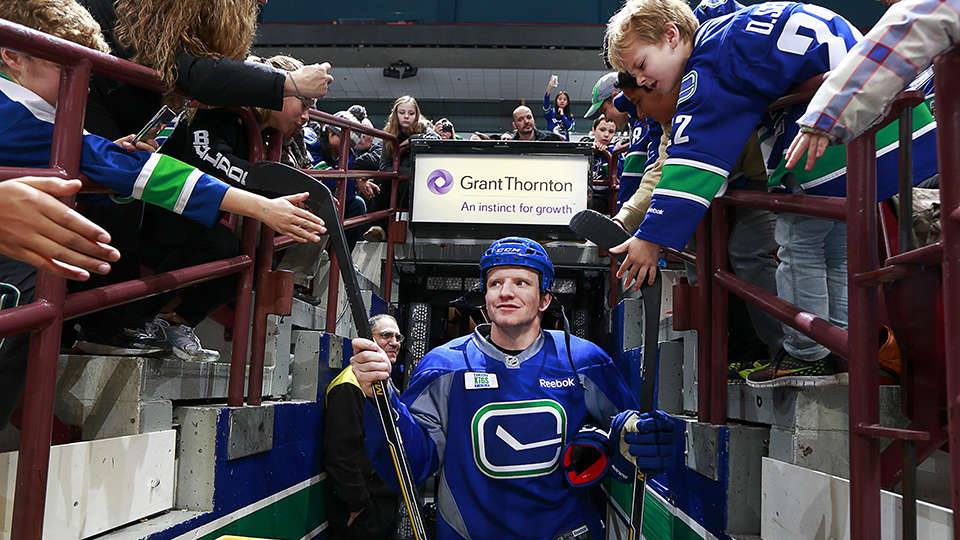 Derek Dorsett’s career is over, and he’s still coming to grips with it.

Stepping onto the ice to present Daniel Sedin with a silver puck to commemorate his 1,000th point in the NHL, Dorsett said he nearly broke down into tears.

“I was a little bit emotional,” Dorsett wrote in a Players’ Tribune-style letter posted on the Canucks’ official website. “It’s been hard for me to come to the rink. No one knew I was going to be there for the ceremony. Then watching my buddies go out to play when I couldn’t was very hard.

“I was standing there under the bleachers, telling myself I’ve got to get it together, because I was about to present to a great friend. The messages I got from them that said great things about me made me emotional. Then I started thinking: ‘I can’t cry in front of everyone!’

“Some fans saw me in the Zamboni area and started yelling some supportive things. That helped me focus. I thought I had it together, but when Daniel looked at me, I almost lost it. I’m surprised I didn’t break down.”

Dorsett called his participation in Daniel Sedin’s ceremony a “huge honour” and a “top-three moment” in his career.

While the 30-year-old is understandably sad that his career is over, he’s at peace with it.

“If there’s one thing I want you to know, it’s that I don’t want anyone to feel sorry for me,” Dorsett wrote, saying he had no regrets.

Knowing his backstory, you can understand why.

Dorsett had to work for everything. Not blessed with great size or god-given talent, he was cut from multiple Triple-A teams in Midget and wasn’t drafted into the WHL.

He was cut by Red Deer as a camp invitee as an 18-year-old. Not many players carve out an NHL career after that kind of rejection in their late teens, but Dorsett did.

After a strong start with his hometown team, the Kindersley Klippers, he was asked to play for Medicine Hat during the 2004-05 season, and ended up winning the team’s playoff MVP award. One year later, he was drafted by the Columbus Blue Jackets in the seventh round.

Dorsett went on to play parts of five seasons with the Blue Jackets before being traded to the New York Rangers in 2013.

The rugged winger was a member of the Rangers team in 2014 that went to the Stanley Cup Final. Ten days later, he got married to the former captain of the Ohio State cheerleading team.

Not long after that, he was traded to Vancouver where his old junior coach Willie Desjardins – who was on the guest list for his wedding – was recently hired as coach.

In what turned out to be his final season, Dorsett surpassed the 500-game mark in his NHL career with the Canucks.

Details on his injury

Dorsett’s neck injury – which later required cervical disc surgery in his neck – was first sustained in a game in Los Angeles on October 22 of last year. He returned to the lineup 11 days later, before being ruled out for the season after nine more games in the lineup.

“There were times I’d feel a bit of a stinger, but it would immediately go away and everything was fine,” he wrote. “On the hit in Los Angeles last season that started this process, it felt like something popped. I thought it was my other collarbone, because the pain and numbness felt the same as when I broke the first one. But the numbness stayed. It wasn’t right. With treatment and time off, everything resolved itself, but the symptoms returned after a few games.”

In Dorsett’s last game before shutting down last season, his arms went numb after what he described as an “innocent push.”

He says he didn’t suffer ‘stingers’ this season until waking up in Philadelphia on the team’s recent road trip. Shortly after, he flew to Los Angeles to get looked at by a specialist.

“I was starting to get some of that weakness, which felt like something more than general soreness. I got out of bed, my arm locked, and something was not right. I tried to practice, but when I reached for the puck, there was a pinch. It was time to dial back and get things looked at.”

The entire letter is well worth reading, beyond the obvious emotional reasons.

He recalled his ‘rookie dinner’ experience while with the Blue Jackets, taking place at Gotham Steakhouse in Vancouver. The bill was approximately $35,000, split between about seven rookies. His first goal also had a Vancouver connection, scoring against Roberto Luongo when he was with the Canucks.

Dorsett told the story of him riding the subway to games in New York during the 2014 playoffs and having fans yell words of encouragement.

Since having to walk away from the game, he’s talked to players he played with, but he also heard from Dion Phaneuf, Milan Lucic, Brad Treliving, Brian Burke, and Mike Babcock.

He paid attention to the media and knew there were many people that thought he’d be bought out, sent to the minors, or waived. It motivated him.

When Dorsett was asked about his playing future at the end-of-season media availability last April, he let everyone know what to expect.

“I’m going to come back,” Dorsett said at the time. “My first shift, I’m going to try to run someone over.”

He wasn’t kidding. He did essentially that in the Canucks’ season opener against Connor McDavid and the Edmonton Oilers.

Indeed, he came back and played the best hockey of his career, by his own admission. He now says that gives him peace of mind, allowing him to accept his fate.

Dorsett’s final stat-line reads 515 games played, 127 points, and 1314 penalty minutes. But it’s the immeasurable part of his game – his determination – that fans will remember most.