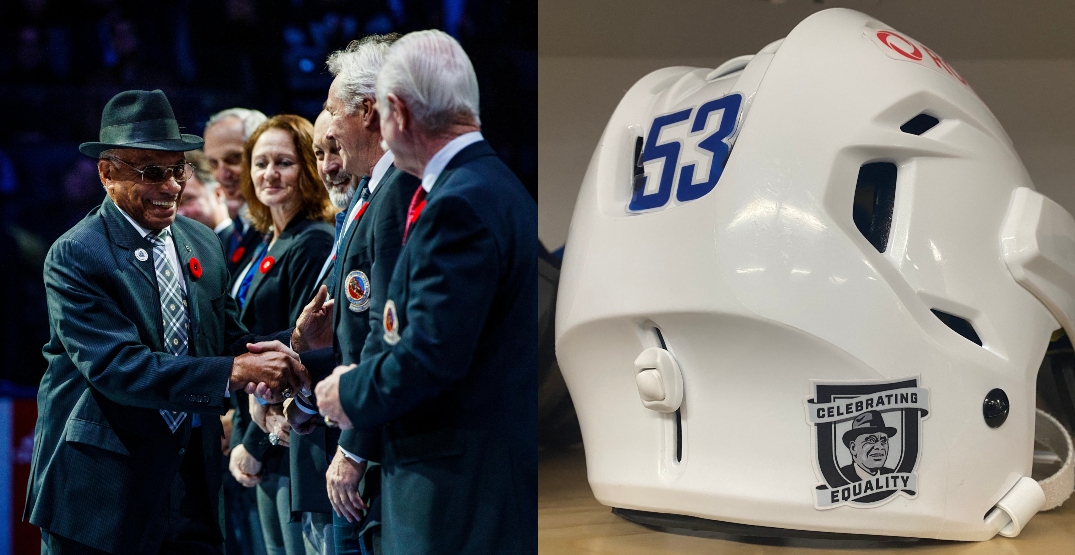 In honour of Martin Luther King Jr. Day and Black History Month, the Vancouver Canucks have a new addition to their helmets.

As part of a league-wide initiative, the Canucks are “celebrating equality” with a nod to the NHL’s first Black player, Willie O’Ree.

The #Canucks are proud to celebrate equality and honour Willie O’Ree, the man who broke barriers in hockey when he became the first Black player to play in an NHL game 63 years ago. pic.twitter.com/f9aJqyuwTo

The Canucks first displayed the helmet decals, which features O’Ree wearing one of his signature fedoras, during Saturday’s game in Calgary. NHL players across the league will wear O’Ree on their helmets until the end of February, which is Black History Month.

Today is Martin Luther King Jr. Day, which coincides with the 63rd anniversary of O’Ree becoming the first Black player in NHL history, when he joined the Boston Bruins in 1958 for a game against the Montreal Canadiens.

Team's across the league are proudly displaying this decal honoring the legacy of Willie O'Ree. pic.twitter.com/pwiZa3bllD

What makes O’Ree breaking the colour barrier in the NHL even more impressive was that he did so despite being blind in his right eye. He played 45 NHL games during his 20-year pro career, doing so at a time when the NHL had only six teams.

Inducted into the Hockey Hall of Fame in 2018, O’Ree is now the NHL’s Diversity Ambassador, and has helped establish 39 grassroots hockey programs in North America as part of the NHL’s “Hockey is for Everyone” initiative.

Since his retirement, Willie O'Ree has served as a relentless ambassador for the game of hockey and continues to engage fans of all ages and backgrounds. pic.twitter.com/08ksCxjOoI