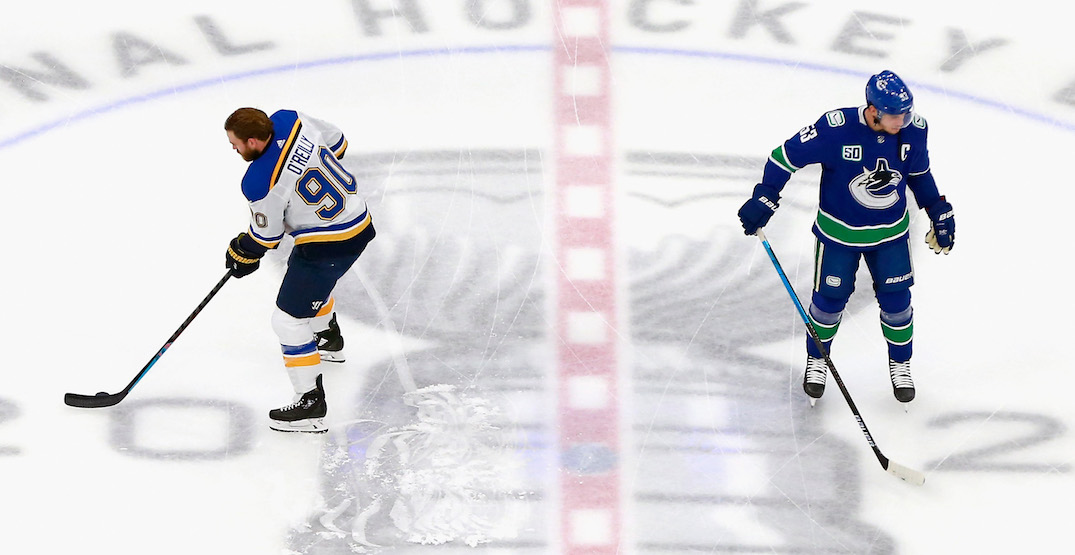 The Vancouver Canucks desperately wanted to be in the playoffs, and now they’re knee deep in it.

The young upstart team is now in a battle against the defending Stanley Cup champions and are facing their first real adversity since losing Game 1 of the previous series against the Minnesota Wild.

After being a shot away from taking a commanding 3-0 series lead on Sunday, 24 hours later the Canucks found themselves all even in their series with the St. Louis Blues.

The Canucks coach spoke openly about the nerves of his team after the loss to Minnesota, but said this time is different.

“We’ve learned a lot already, we’ve got 10 guys that haven’t played playoff games [before this year],” said Canucks head coach Travis Green during his media availability on Tuesday. “Our guys know they’re in the battle now.”

Momentum is on the Blues’ side now, as the champs look to take the series lead in Game 5 on Wednesday.

Green said the team will meet tonight in preparation for the next game, but he was as calm and cool as ever, at least in front of the observing eyes of the media. He spoke about the team’s need to get shots from the paint, but otherwise he wasn’t willing to share any meaningful critiques for his group.

Green wasn’t willing to divulge any tactical secrets, but the top concern for Game 5 will be the same thing it has been for every game in this series: stopping Ryan O’Reilly.

They’ve been unsuccessful so far, as the reigning Selke Trophy winner has been virtually unstoppable in this series, with the Blues holding a remarkable 97 to 29 shot attempt differential with O’Reilly on the ice.

When the Blues had last change in Game 1 and Game 2, Elias Pettersson saw the bulk of time against O’Reilly. Pettersson still saw a lot of O’Reilly in Game 3 (10:30 at five-on-five), though so did Bo Horvat (6:27).

In Game 4, that changed, with Green successfully keeping Pettersson away from O’Reilly for the most part while Horvat was matched up against him for 8:03 of five-on-five time.

Though O’Reilly scored twice in the game, both goals came while Horvat was on the bench — once on the power play and once at even strength while Sutter was on the ice.

To get the matchup Green wants will take more effort in Game 5, as the Blues will be the home team. So it likely means an overall strategy to stop O’Reilly’s line, rather than a white knight.

Asked today if the Canucks were giving O’Reilly’s line too much respect, Horvat wasn’t going there.

“We know how good of a line they are,” said Horvat, who added that he feels good after taking a big hit from Marco Scandella last game. “They’re obviously one of the top lines in the league and they’ve been to the Stanley Cup Final, they’ve won the Cup. So they know what it takes to win. I don’t think we’re giving them too much respect, if anything we got to be harder on them and try to eliminate their time and space. When they have time and space, they’re going to make something happen.

“I definitely think we have to be harder on them, but obviously they’re an effective line. We’ve got to find a way to make them stop.”

The problem with stopping O’Reilly is there isn’t really a secret to the way he plays. A 200-foot player, his line plays a simple game based on executing the fundamentals and aggressive play.

So the solution? They need to be physical and make him play defence, Green suggested. In other words, they need to be better, by getting control of the puck and generating their own scoring chances.

Easier said than done, but the Canucks are going to give it a try.

“They are relentless, but I think we are too,” said Horvat. “I think that’s the identity of our team. When we’re going and we’re on the forecheck, and we’re skating, and doing all the things that give the Canucks our identity, which is being relentless, giving it back is what’s going to make us successful and that’s what made us successful in the first two games. I think we need to get back to that.”