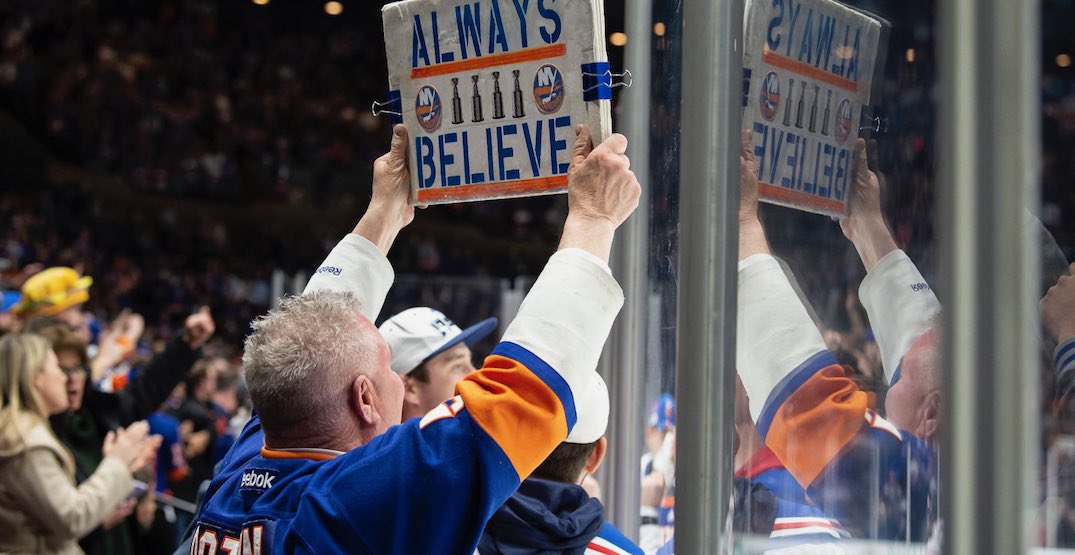 This oddity will soon become a reality in the sky over the city of Toronto, as New York Islanders fans have found a creative way to support their team. They’re not allowed to enter the country, but they’ve now raised enough money to fly a plane over the city.

With their team up 3-0 in their series against the Washington Capitals, Islanders fans are paying to fly a banner that says “Let’s Go Islanders” over downtown Toronto. The campaign was so successful that organizer Matthew Kammerer has stopped taking donations after $4,562 was raised.

“Imagine our boys far from home and their families and the lift it will give them while they battle their way through the Eastern Conference,” Kammerer says on the GoFundMe page. “Our fundraiser will provide us with over an hour of our LETS GO ISLANDERS banner making multiple passes above the home arena and city of our hated rivals the Toronto Maple Leafs.”

Teams have found ways to send messages to players inside the bubbles of Toronto and Edmonton. The Philadelphia Flyers set up a billboard featuring their popular mascot Gritty in Toronto. The Montreal Canadiens and Tampa Bay Lightning have pulled similar moves in Toronto, while the Nashville Predators purchased a billboard in Edmonton.

Those messages were paid for by each respective team though, while the Islanders banner in the sky is a fan initiative.

“Our message is sure to be photographed and end up on social media and maybe even television if we are lucky,” adds Kammerer. “It will reflect grandly upon one of the fiercest and most passionate fanbases in the world of sports.”

Islanders players are currently staying at the Royal York Hotel, close to Scotiabank Arena in the Toronto bubble.

Isles defenceman Ryan Pullock was made aware of the plan on Monday by Christian Arnold from NYI Hockey Now. Needless to say, he was a fan of the idea.

“That’s awesome,” said Pulock. “We’ve seen it on social media and stuff. You see videos that people are posting whether it be in their living room cheering or whatnot. We have a pretty special fan base and they let you hear it when we’re doing well. It’s pretty special to have their support and it’s awesome to see everything online.”