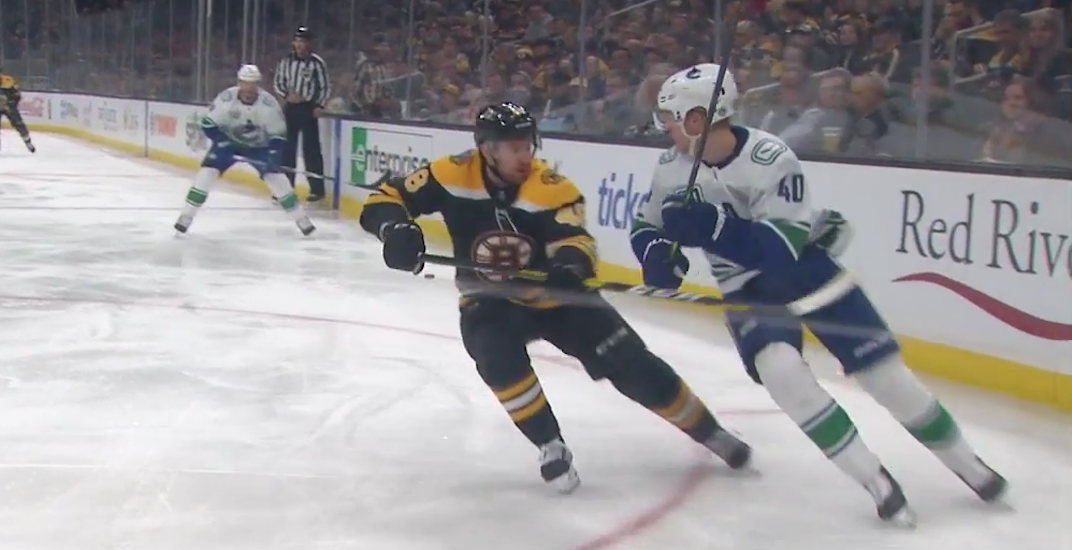 The Canucks head coach was his usual calm and collected self when answering most questions, but the heat was turned up a notch when he was asked about a controversial hit on Elias Pettersson that happened early on in the game.

And you can’t blame him.

Bruins defenceman Matt Grzelcyk delivered an Aaron-Rome-late bodycheck on Pettersson in the end boards that somehow went uncalled. Watch as Pettersson gets rid of the puck before the hashmarks on the side boards but doesn’t get hit until he’s at the trapezoid behind the net.

Are you getting 2011 flashbacks?

Pettersson was shook up by it, but was able to play the rest of the game.

Still, Green was understandably perplexed when he spoke after the game.

“I’m so frustrated with it. This guy (Pettersson) is one of the best young players in the league and he gets hit and he’s totally defenceless,” said Green. “It’s two seconds after he lets go of the puck, I’ve watched it a couple of times.

“He’s unassuming, he’s defenceless. He feels like there’s no way he’s going to get hit in that spot, he’s in a vulnerable position. Those are hits that the league is trying to get out of the game, especially against top players in the league and I think Petey’s shown that he’s one of those guys.

“It is frustrating for me as a coach to see some of the abuse he takes, where it doesn’t get called. He works through it, he gets frustrated.

“You know, he’s not the biggest guy, but doesn’t mean you can take advantage of a player that’s not ready to be hit, that’s very late.

“That should have been a penalty all day long.”

Coach Green discusses the #Canucks effort and a late hit on Pettersson he is not pleased with. pic.twitter.com/Be6lx9vBA9