Hopefully you knew the score of the game before reading this.

If not, sit down, because we need to talk.

The Canucks lost 5-2 to the expansion Vegas Golden Knights on Thursday.

Part of you already feared this outcome when you read the Knights were starting Maxime Lagace in nets, the goalie who before this was trying to fight his way into the AHL.

The Canucks have this quirky tradition, you see, of making relatively unknown goalies look like superstars. You’ll never accuse the Canucks of being bad hosts.

Vancouver is probably lucky the Knights didn’t start Kamloops Blazers goalie Dylan Ferguson in net, or they could have been shut out. Ferguson would have somehow gotten a hat trick, and announced after the game all the lanes on the Granville Bridge had been turned into bike lanes while the fans were watching the game.

Now to be fair to the Canucks, at one point it looked like they might have a game on their hands.

Like Steve Harrington and Jonathan Byers battling over Nancy Wheeler, Boeser and Horvat both tried to win our hearts by scoring a goal.

Steve/Brock with his crazy hair and his bravery, rushing to the aid of the Canucks to fend off the evil Knights.

Jonathan/Bo with his rugged looks and steely determination, later jumped in to tie the game up.

Except, spoiler alert, in season three, the demogorgons win.

Gudbranson falling on his face and sliding into a corner, taken out quicker than…well, I won’t spoil it if you haven’t seen season two.

Pouliot serving up a turnover twice in a row for reasons we mere mortals may never know. Was he the spy all along?

Before you knew it, Las Vegas was scoring into an empty net, with a slightly sad looking Vanek sliding into his own net.

Vanek knew they should have turned up the heat earlier. 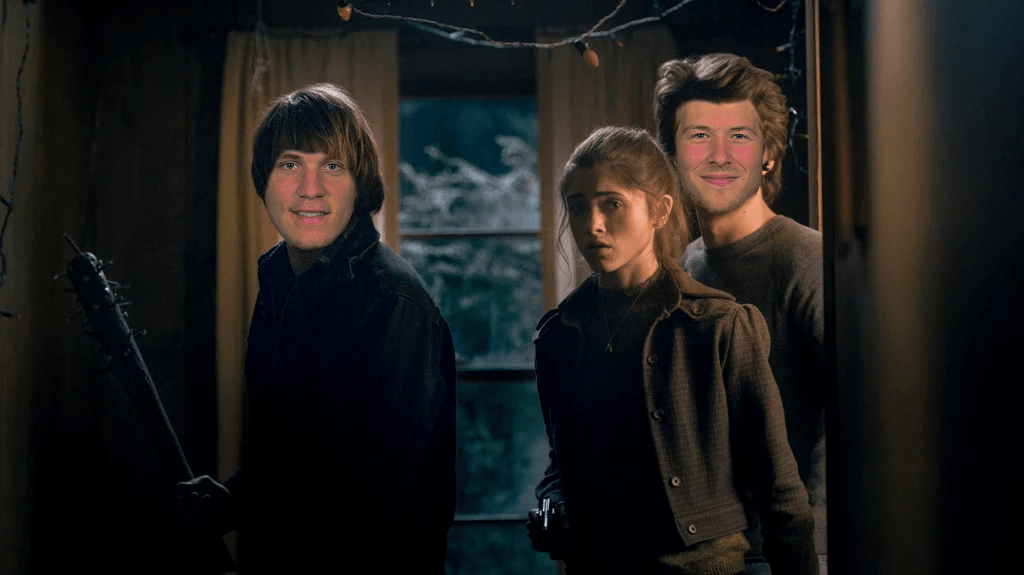 Their account started off charming, then quickly turned more annoying than your little brother. How were they tonight?

but we are a comeback with a vengeance team:)

Burn it with fire.

The Sedins are legends in this city, and for good reasons.

I don’t even have to list their resume, you can just close your eyes and pick your favourite play of theirs in your head.

It was Daniel going between his leg to score against Calgary wasn’t it.

As legendary as Daniel is, however, this was not a legendary play on defence.

Someone call the cops because that’s a drive by.

How bad was it? So bad that the entire line had to stop and watch the replay in shame after the goal was scored.

One handed swing at the stick as he skates past it, as if to say “Who me? I’m just dropping by, I’m not staying long. Tee hee.”

Stern shake of the head coming your way Daniel Sedin.

The Knights second goal was another case of questionable defence.

Pouliot played this one decently, kept his guy to the outside.

And to be fair to everyone involved, that is a very nice pass from Alex Tuch.

What isn’t a good look is Edler not tying up the stick or closing the gap on William Karlsson.

Edler and Pouliot have had some strong games as of late, but tonight was not a banner night for them.

Of course, it wasn’t a banner night for much of anyone on defence, really.

Fun Lagace Fact: His career save percentage is .864.

What's the over/under on minutes into the 2nd Dorsett gets in a scrap? I'll take the under; gotta get the guys "fired up". #canucks

Honestly, who wasn’t expecting Dorsett to throw down to start the second period, especially after his “Fight heard ’round the world” in LA?

Shockingly, the Canucks didn’t need a fight to boost up their self esteem tonight.

Instead, in a move straight out of wrestling, Coach Green broke up The Shield, putting Sutter with Boeser and Baertschi.

It only lasted one period, but it did get results.

There couldn’t have been a worse player for the Knights to lose the puck to, as Brock continues his quest for the Calder by scoring goals and…eating molls…and…bypassing tolls?

OK I’ll work on the rhymes, but the point is, Boeser sells tickets in this town, and for good reason. He’s the main attraction that makes it worth it sitting through the really bad opening act bands that you pretend to enjoy. When he gets the puck, you get the sense he can actually beat the legendary goalie known as Maxime Lagace. Not many people can.

Ok well all of Edmonton can. And most of the AHL. And some of the ECHL.

But hey, remember when Brock sat out at the start of the year? Travis Green pretty much can never scratch Boeser again unless Brock goes stone cold for a month.

Speaking of young bucks, Horvat hooked up with Vanek to tie the game up for the Canucks later in the second period.

Vanek is strong on the puck and drives into a high danger spot, and gets off the shot.

Gagner goes hard to the net, taking two guys with him.

Then Horvat swoops in and cleans up the mess.

Yes, it was a lucky bounce once again for young Bo, but full credit to Horvat for always driving to the net and setting up shop there.

Remember when Coach Willie wouldn’t put Horvat out on the ice when the team needed a goal late?

There were worrying signs that the defence was going to crack all game.

The Canucks were outshout 21-30 after all.

The Knights could have easily scored here while Gudbranson did the world’s biggest U-turn to get back into position.

It was that sort of thing all night, where it felt like Vegas were getting the better opportunities, and the Canucks defensively weren’t up to the task.

The Canucks felt like they were chasing the play all night in their own zone.

On Vegas’ third goal Gudbranson chases down the puck, falls, and before you know it, Hutton and Gagner are scrambling and it’s 3-2 Knights.

Now, theories were bounced around. Maybe the puck took a weird bounce off the boards? How could Guddy take blame for the hockey gods playing a cruel joke?

Well, like all good CSI shows, I enhanced the replay.

Guddy makes a play for the puck, knocks it with his stick, it rolls in his feet, he tries to soccer it up, Neal pokes the puck around him, and the Guddy falls, taking himself out of the play.

Gudbranson is known for his tough play, you would almost rather see him try and finish the check on Neal rather than peel off there to begin with, but it is what it is.

The fourth goal was even worse, as Pouliot not only gave up the puck once, but twice, in the same shift.

Again, a bit of a bad bounce is involved in this, but it’s a position Pouliot put himself in with the initial turnover.

Some called it an homage to Sbisa, others just called it like it was, a series of poor choices.

There is no way to sugarcoat this game, it was a poor effort.

If you’re a team facing an ECHL goalie, and you don’t out-shoot the other team, and you are held to 21 shots, people are going to be rightfully frustrated with your effort.

Comeback games are great for morale when you pull it off, but disheartening when it falls flat on its face against a team that just got beat 8-2 the night before.

The question now, is, does Jake Virtanen get back into the lineup?

After sitting out three straight games, and watching the Canucks struggle to carry the puck into the offensive end, it seems like a no brainer to bring him back into the lineup.

Up until now, Travis Green has enjoyed some leeway with how he handles the kids, due to the fact the Canucks have played better than expected.

But after a loss like that? It will be a tough pill to swallow for Canucks fans if he keeps Jake out of the next game.