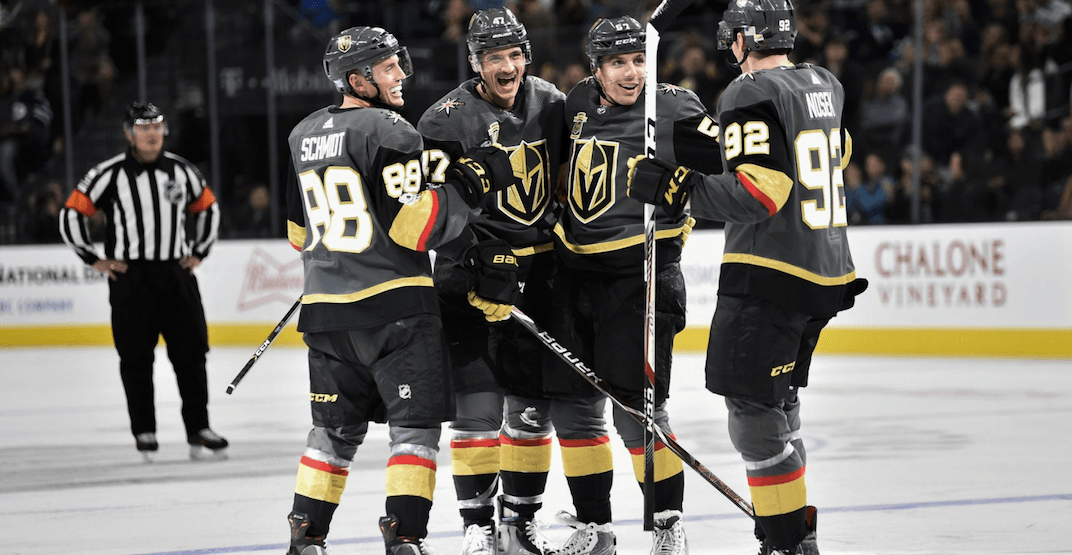 The Canucks are set to meet with the expansion Vegas Golden Knights tonight in Vancouver, for their first-ever regular season matchup.

Here’s everything you need to know about the NHL’s 31st franchise, who are the surprise of the league this season.

1. They’re the best expansion team ever

The NHL was kind to its newest franchise.

Thanks to some tweaks to the expansion draft rules, the Golden Knights were able to assemble the best expansion team of all time. Along with a relatively easy schedule to start the year, they came out of the gates hot.

Vegas had a terrific start to the season, winning their first three games and eight of their first nine NHL regular season contests. That tied the Washington Capitals’ debut season total – in October.

By winning our eighth game today, we have tied the Washington Capitals for how many games they won their entire first season…it's October.

Before the Vegas Golden Knights ever played a game, they’d heard all the jokes.

I mean, they practically write themselves.

One of the jokes was how visiting teams would fare in Sin City. The Roxy Flu ain’t got nothing on the Vegas Flu.

Well, so far, it’s turned out to be true.

Vegas has the best home record in the NHL so far this season, going 7-1-0. One of those wins was a 7-0 drubbing of the Colorado Avalanche.

They’re a little less impressive on the road, with a 3-5-1 record.

3. Sbisa plays a lot for them

Luca Sbisa was the player that Vegas chose from the Canucks in the expansion draft, much to the delight of many Vancouver hockey fans.

While the rugged defenceman won’t be in the lineup tonight – he’s currently injured – the change of scenery has been good for Sbisa.

Sbisa is second on the Golden Knights in average ice time this season, playing 20:24 per game. He’s already got eight points in 16 games, which is a remarkable feat given he only put up 13 points in 82 games last year in Vancouver.

4. All of their goalies are injured

And not by choice.

The Golden Knights’ four professional goaltenders – Marc-Andre Fleury, Malcolm Subban, Oscar Dansk, and Maxime Lagace – are all currently injured. Vegas recalled 19-year-old Dylan Ferguson from the Kamloops Blazers of the WHL on an emergency basis, and he made his NHL debut on Tuesday against the Edmonton Oilers.

We have an NHLer on our roster! Congrats to G Dylan Ferguson on making his NHL debut tonight!! pic.twitter.com/D1Xj4ODkYm

Tonight, he could make his first career start – and he is still a little star-struck.

Ferguson said McDavid tapped him on the pads and said “good job kid” Admitted he was star struck a little.

yo we're still in second place👍

How does a new sports club get international fans? They hire someone who knows how to engage with people on social media in a unique, funny, and often snarky way – like Dan Marrazza.

Long before the Golden Knights played their first game or even had a roster, their social-media game was on point. As Marrazza told The Athletic, he’s “always been part of ‘hockey Twitter,’ professionally and personally as a fan.”

So when he joined the Golden Knights, he decided to make their club account nothing less than a part off ‘hockey Twitter,’ rather than becoming another lame team account.

Thanks to Marrazza’s work, the franchise was quickly present all over Twitter and gained popularity all around the globe. Many said they will cheer for the team or become full-on fans, all because of the “mystery man” behind their Twitter account. And even those who would never abandon their beloved team for the Golden Knights appreciate Marrazza’s takes.

6. They’ve got a bright future

The Golden Knights may be enjoying immediate success, but that doesn’t mean they won’t be even better in the future. GM George McPhee worked some trade magic to end up with 12 picks in the 2017 draft, including three in the top 15 to get Cody Glass, Nick Suzuki, and Erik Brannstrom.

So even in the unlikely event of a playoff appearance in their debut season, Vegas has some high-end talent coming up through the system, giving them a solid foundation for future years.

The Vegas Golden Knights are like no other NHL expansion franchise. They are dangerous now, and they will stay dangerous in the future.

If the Canucks want to stay ahead, they better start tonight.