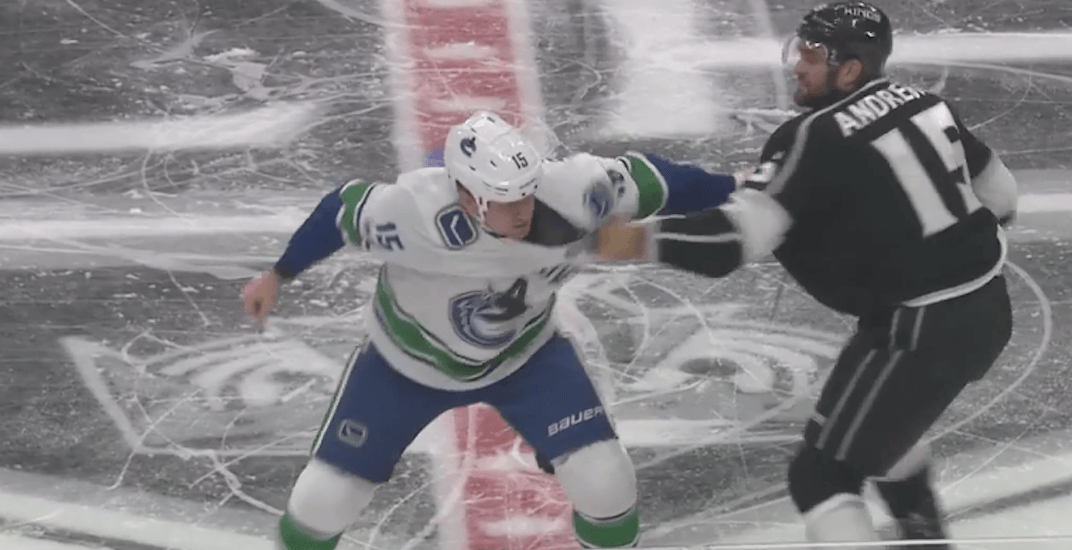 Tuesday night’s win for the Vancouver Canucks was huge on a number of fronts.

First and foremost, it prevented the team from coming home on a three-game losing streak – particularly important given 4-1 and 5-0 scorelines in Anaheim and San Jose.

A loss to the Kings would have been cause for panic throughout the fanbase because, well, we’ve seen this movie before.

Getting their butts kicked in Los Angeles? Going winless in California?

It would have been a sign that these are the same old Canucks. The same team that finished near the bottom of the league standings in three of the last four years.

The same group of guys that have no business talking about the playoffs.

Perhaps this was going through Derek Dorsett’s mind when he saw the first shot of the game go in on goaltender Anders Nilsson.

After the Kings scored 23 seconds into the game, Dorsett fought Andy Andreoff on the next faceoff.

Some will have you believe that was a major reason for the Canucks’ comeback. Others will tell you that it had no bearing on the result whatsoever.

The debate that ensued for the rest of the game between Canucks media and fans was intense. It continued on into the night and again the next day.

I’m here to tell you that everyone’s wrong.

First, let’s identify the fighting narrative that has existed forever.

Whether it be lazy journalism, or members of the media that can’t resist a good story, the romanticizing of fights in hockey has existed forever.

Player X inspired his teammates by dropping the gloves and his team back to win the game.

What the analytics say

There’s no room for romance in analytics.

In the age of big data in the game of hockey, the stats experts have done a wonderful job at debunking myths.

Managers, coaches, media, and fans have been overrating intangibles for years. Analytics have proven these myths for what they are, overrated.

When it comes to fighting in hockey, the numbers say it doesn’t have impact on the final outcome of the game.

What the players say

Ask a hockey player if watching his teammate drop the gloves helped boost their team to victory and you’ll get the same answer every time.

Of course it helped.

#Canucks Sven Baertschi's quote on Dorsett-Andreoff: “Oh, my God. It just got all the guys going. Some people may not see Dorse as that important. But for us, as a team – and we’re all brothers in here – when you see a guy go do something like that, it gets us fired up.”

To understand the quote by Sven Baertschi above, you have to understand a hockey player’s mentality.

Don’t rock the boat. Don’t be controversial. Don’t step out of line.

Downplaying the role of fighting in hockey wouldn’t go over well with teammates. So why admit it?

Even if Canucks players fully believed that Dorsett’s fight was a key to victory, they could be falling into the same trap that everyone falls into – and that’s overrating the importance of intangibles.

The truth lies somewhere in the middle.

I’m not even a big fan of fighting in hockey – I’d be fine if they removed it from the game – but fights unquestionably bring energy to the building. Fans get loud, players on both benches stand up. That can certainly help to shift momentum.

Everything affects everything – crowd noise, a big hit, a fight. But to what degree?

Problem is, every fight has two combatants, so it affects both teams. In the long run the psychological effects will probably even out, which is why the analytics community thinks hockey fights are nothing more than a sideshow.

The issue with that conclusion is that it assumes all fights are created equal.

Is there a difference between seeing a beloved teammate get into a fight versus a guy you secretly hate? Of course there is.

There’s probably a difference when you see a player defending a teammate’s honour versus a staged fight too.

The energy on the bench is probably changed if you see an undersized player get in a fight, particularly if he wins it. You can’t convince me that Rick Rypien fighting Hal Gill did as much for the Habs as it did for the Canucks all those years ago.

Does a fight affect the Sedins – a pair of veteran cerebral gentlemen – as much as it does for a young energy player like Jake Virtanen?

Unquestionably, fighting’s affect on a game is real, but let’s not over-romanticize it.

Baertschi scored the winning goal on a power play as the result of a high sticking penalty on Dorsett. That likely had more to do with the final outcome than a staged fight in the first period.

In this debate, both sides are wrong.

Fighting does affect hockey games – just not as much as you may think sometimes.