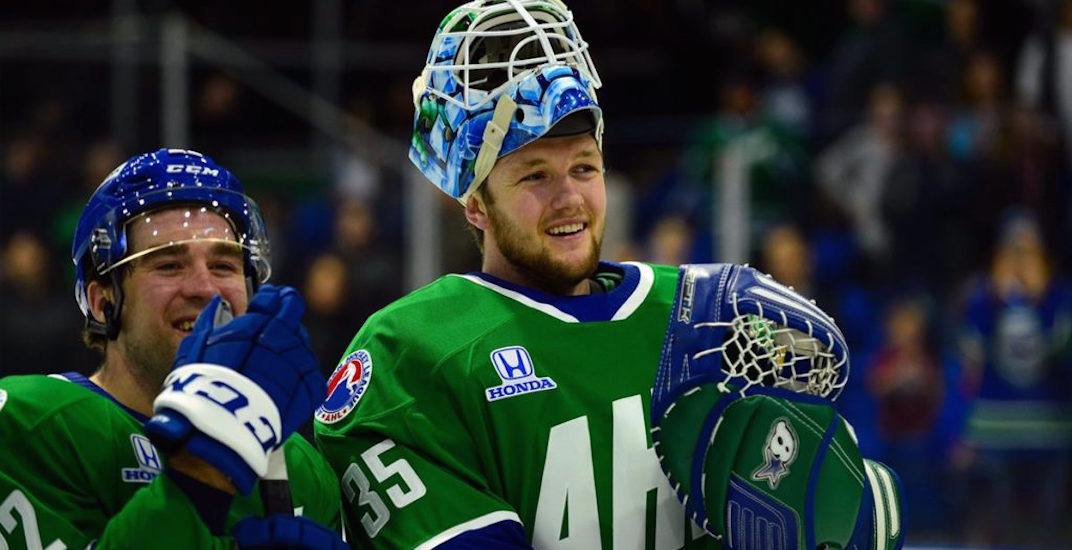 It’s been nearly four years since the Vancouver Canucks selected Thatcher Demko at the 2014 NHL Draft.

Having moved on from both Roberto Luongo and Cory Schneider in less than a one-year span, Demko would represent the goaltender of the future for the organization.

So far, the San Diego native has been everything the team could ask for.

After three stellar seasons at Boston College, Demko has found his groove in the AHL. In just his second pro season, the 22-year-old has a 19-10-4 record with a .919 save percentage, as the Utica Comets’ undisputed No. 1 goaltender.

It has some people wondering if he could make the jump to the NHL as early as next season, one year before he was expected to.

Fresh off a stellar rookie season at Boston College, the only thing holding Demko back in the draft rankings were his wonky hips, which would eventually require surgery.

While that was enough to scare off a few teams, the Canucks decided he was worth the risk, selecting him with the 36th pick in the second round.

After one more season of NCAA hockey, Demko had his hips surgically repaired, allowing more flexibility, making him an even better goaltender.

Four years later, it’s easy to see that the Canucks made the right choice with Demko.

While the other top goaltending prospects from his draft class (Mason McDonald, Alex Nedeljkovic, and Vitek Vanecek) have struggled to adjust to the pro game, Demko has flourished.

In a time when most goalies don’t break into the NHL until 24-25, Demko looks to be ahead of the curve. Even after a recent stretch has brought the season numbers down a bit, his save percentage is in the top-10 in the AHL. Every goalie ranking above him is older, most of them by many years.

After a slow start to his AHL career, Demko has posted a .919 save percentage since January 2017, a sample size of 62 games.

“The biggest thing was that the margin for error [at the pro level] is so small,” said Demko in a telephone interview with Daily Hive. “If you make just the slightest mistake, a lot of the time it’s going to end up in the back of your net.”

For the 6-foot-4, 195-pound goaltender, it was just a matter of learning from his mistakes.

“There was definitely some growing pains at the beginning of last year and I was able to adjust to that and certainly learn from it,” Demko added. “I’ve been trying to apply the stuff that I learned last year into this season. You can’t really rush development, it’s a gradual process.”

How long until Demko is a Canuck?

Demko is coming along quicker than most people expected.

Most goalies don’t break into the NHL until their mid-twenties; Demko could potentially do it before his 23rd birthday.

While Jacob Markstrom and Anders Nilsson are both under contract next season for the Canucks, neither are good enough to stop Demko from taking one of their spots if he proves he’s ready. For that reason, the path to the starting role could be a quick one.

Heck, he might not even have to wait until next season. With Vancouver out of playoff contention, nothing is stopping the Canucks from giving their young goaltender a taste of NHL action right now.

To that notion, Demko replied, “I’d love to play an NHL game this year.”

Demko has shown consistent play at the AHL level for more than a calendar year.

While the Canucks goalie prospect knows he is doing well in his development thus far, he acknowledges he still has tons of work ahead of him before being an everyday NHL goalie.

“The guys up there are the best in the world, so there’s certainly a talent difference. In pro hockey there’s a small margin of error but once you do make that jump to the NHL then your margin of error becomes even smaller which just increases the amount that you have to work to get better at those details.”

Mature for his age, Demko has shown himself to be level-headed in a position that requires it. It’s something that can be explained in part by his love for philosophy.

“I think at the end of the day [philosophy helps]. When you’re playing hockey you can see the bigger picture and keep an eye on what you’re working towards and not get caught up so much in a few bad games. Overall it just helps me stay relaxed in the net, make sure I’m having fun and enjoying being on the ice.”

It’s easy to compare Demko to another American goalie that attended Boston College and was drafted early by the Canucks exactly 10 years earlier – Cory Schneider.

Statistically, it makes a lot of sense.

Here’s a side-by-side of both goaltenders’ stats, Demko on top and Schneider underneath. Note that Schneider was drafted after the 03-04 season and Demko after the 13-14 season. 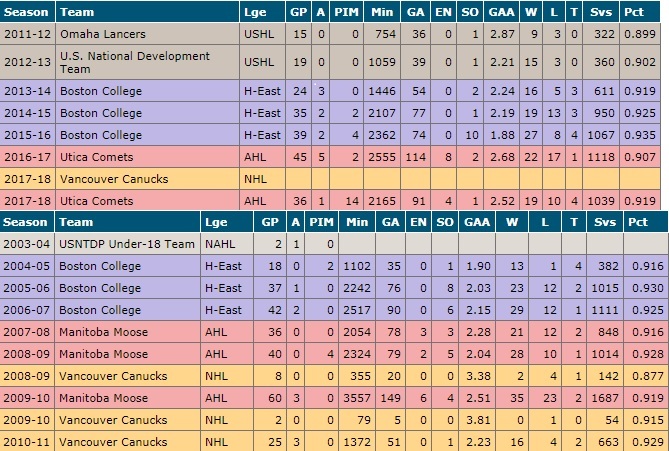 Schneider then did three seasons in the AHL before eventually breaking onto the Canucks full-time in 2010-11, seven years after his draft year. We can expect Demko won’t take that long because A) he started pro hockey one year sooner, and B) he doesn’t have Roberto Luongo ahead of him on the depth chart.

Demko had a bit of a head start compared to Schneider, having already finished a year at Boston College prior to being drafted. Since both did three years in the NCAA, Schneider joined the AHL in his draft+4 season, while Demko started in Utica in his draft+3 season.

If you ask Demko though, it’s not Cory Schneider that he compares himself to. It’s Corey Crawford.

“[Crawford] is big and he can compete and be athletic,” said Demko. “I think something that he tries to do is rely on his technicalities and his efficiency in the crease is really good.”

Demko went on to mention however that it’s hard to make those kind of comparisons, and instead he likes to look at every goalie.

“Everyone has a different style, everyone in the NHL is there for a reason. They have different parts of their game that are very effective so I try to watch as much as I can and if one guy does something that I could maybe apply to my game then I’m going to take advantage of it.”

That’s a good way to look at it.