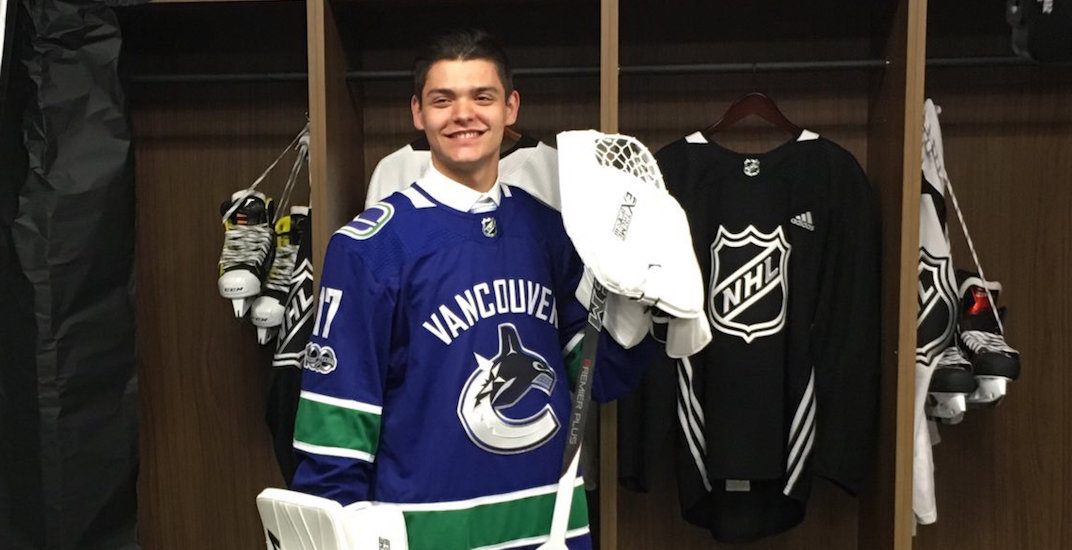 Any goaltender that steps into the crease to face 100 mph shots has to have character, credibility, and immense confidence. Vancouver Canucks 2017 third-round draft pick, Michael DiPietro has that and a whole lot of swag.

Taking questions from reporters at Canucks development camp this week, he’s got a big smile on his face that reminds you of another Italian goaltender the team once had.

“Once you get your first camp under your belt, you’re more comfortable. This year has been better, I’m able to work on the little things and trust my game.” – @miketendy #CanucksDevCamp pic.twitter.com/ioCq05K3n8

DiPietro has a lot of work to do before getting to that level, but he is showing all the signs, and you can tell he gets it. At his second development camp, he’s eager to make a positive impression.

“This time around, I really want to work on some things, my technical side, slowing my game down. I feel as the practice went on, I felt more comfortable with it. Those are the little things I want to improve coming to main camp.”

The 19 year-old is coming off his third season with the Windsor Spitfires of the OHL where he led the league with seven shutouts. DiPietro finished the season with a 29-21-1 record, 2.79 goals against average, and .910 save percentage en route to winning the OHL Goaltender of the Year Award.

But his sparkling season sandwiched a crushing disappointment in December.

The final goalie cut from Canada’s World Junior team, DiPietro is a good bet to start at this year’s tournament at Rogers Arena.

“It would be awesome.” DiPietro told reporters. “Last time around, I was really grateful for the opportunity, but I have a more serious approach to it. This is something I really want. I want to be the starter. I want to win gold here in Vancouver, that’s my goal come Christmas time, and I’m not going to let anyone get in the way of that.”

Instead of sulking after being cut, DiPietro used it as motivation.

“That was the first team I ever got cut from. It was a tough pill to swallow, for myself it was hard mentally. I slowly got over that. I really had a strong second half, and I think that made me a better goalie, and obviously a better hockey player moving forward.”

DiPietro will play one more season of junior hockey before turning pro – likely with the Utica Comets. Thatcher Demko, Vancouver’s other highly touted ‘goalie of the future,’ is expected to graduate to the NHL level by then.

Vancouver is no stranger to goaltending controversies, and if both netminders realize their potential, they could be involved in one some day.

“Vancouver is in a rebuilding state right now with a lot of young prospects in the pool,” DiPietro said. “I’m proud to be a part of that pool. Thatcher has a really big opportunity next year in camp. I won’t put myself behind the eight-ball either. I just got to try in come in and be prepared.

“It’s a process here, especially for goaltending. I want to make sure that I’m 100 percent ready for the next level in all aspects – mentally, physically, and emotionally – before I make the jump. You see a lot of goalies that kind of get burned out really fast. I think where my game is headed and the recourses here in Vancouver, it’s awesome. Especially with Thatch and I being close. I’m really excited about what the future has.”

There’s pressure on DiPietro to succeed, but he’s pulling for Demko – his roommate at training camp last year – to prevail too.

“Me and Thatch actually Snapchat a lot,” DiPietro revealed. “We keep in touch. I actually watched his first game here in Vancouver.

“(I was) obviously really happy he got the win. It kind of gave me a heart-attack in watching that game. He’s a really good goaltender, and a really good resource for myself. I know last year, rooming with him was awesome. Hopefully we can be goalie partners one day.”