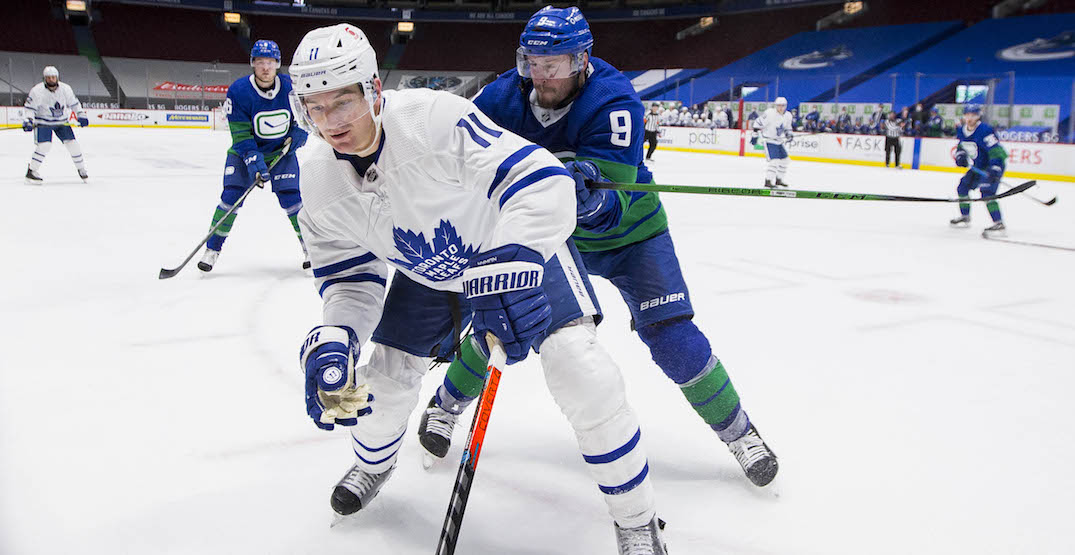 Zach Hyman’s time with the Toronto Maple Leafs appears to be coming to an end, and the Vancouver Canucks are reportedly in hot pursuit.

The gritty 29-year-old winger is set to become an unrestricted free agent on July 28, and the Leafs aren’t expected to be able to fit him under their salary cap. According to a report from TSN’s Darren Dreger, the Leafs have given permission to his agent to speak with other teams to see if Toronto could trade his rights before the start of free agency.

Multiple reports indicate that the Canucks are one of the teams most interested in Hyman.

Kevin McGran of the Toronto Star reports that the Canucks, along with the Calgary Flames and Edmonton Oilers, are the “frontrunners” to sign Hyman. Andy Strickland of Bally Sports Midwest in St. Louis has also reported the interest from those three teams, along with the Seattle Kraken. Rick Dhaliwal of CHEK TV confirmed that the Canucks have made contact with Hyman’s representatives.

St. Louis among those with legit interest in potential free agent Zach Hyman…lots of interest from a number of teams in Canada as well. Edmonton, Vancouver, Calgary. I do believe Seattle could become a player as well. #stlblues #Cofred #Canucks #Oilers #Seakraken #Leafsforever

The Canucks have made contact with the Zach Hyman camp to express interest in the UFA.

Hyman is the type of player that any team, including the Canucks, would love to have. The 6-foot-1, 211-pound forward has good speed and plays a physical style of game, and can play up and down the lineup.

The question is, at what price?

Coming off a season in which he scored 33 points (15-18-33) in 43 games, Hyman is looking to make $5 million per season on an eight-year deal to remain with the Leafs, according to McGran’s report. That’s a hefty price tag for a player who has been more of a complementary piece, albeit in a top-six forward role.

Signing Hyman will be a challenge for the Canucks, who will have limited cap space after they sign Elias Pettersson and Quinn Hughes to new deals. The team also needs to find a third-line centre and at least two top-four defencemen, as Brandon Sutter, Alex Edler, and Travis Hamonic are pending unrestricted free agents.

GM Jim Benning is surely looking to offload salary, though that’s not an easy task. Benning has gone on record to say that the team is willing to buy out players this offseason, so that’s an option. They could also offer a draft pick to Seattle in exchange for them taking Braden Holtby in the expansion draft next week.

Another option? Benning could make a major move involving a player with value that he doesn’t want to lose. The Canucks are reportedly “open” to trading Brock Boeser, according to a report in The Athletic, though the article written by Craig Custance and Dom Luszczyszyn listed the likelihood of a trade as “low.”