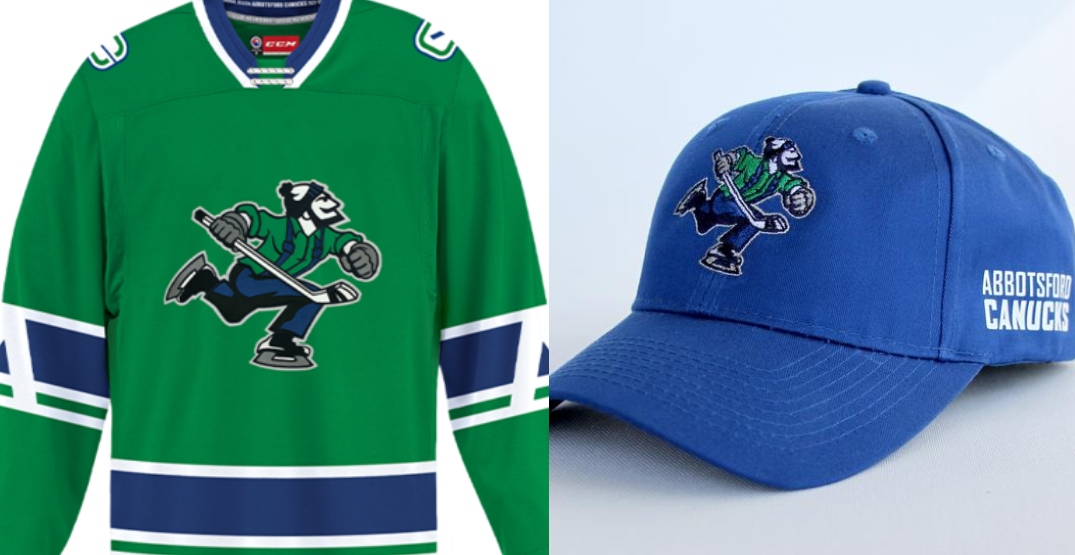 We are also Canucks.

Don’t know if that’ll be the new team’s slogan or not, but today qualified as an interesting day for the Vancouver Canucks. The team unveiled the new name, logo, and jerseys for their AHL affiliate, which is moving to Abbotsford after eight years in Utica.

It’s the first time in the Canucks’ 51-year history that their farm team will be close to home, so fan interest was high. For months, fans have been spitballing creative names and concepts, though the most obvious choice did fly a little under the radar.

After a 20-minute delay this morning, it was revealed that the AHL team will be known as the Abbotsford Canucks and will use Johnny Canuck as its logo. Johnny Canuck was the primary logo used by the Western Hockey League’s Vancouver Canucks, a franchise that was in existence from 1945 until Vancouver entered the NHL in 1970. The NHL Canucks bought the rights to the logo more than a decade ago, but have used it sparingly since.

The traditional Johnny Canuck design has been used in merchandise sold by the team, and a stylized Johnny was used as a patch on their alternate uniforms from 2008 to 2017.

These new Canucks will wear the same colours as the team that plays at Rogers Arena, though green, not blue, will be the primary colour for Abbotsford’s home uniforms. Other subtleties with the new jerseys include retro-inspired laces around the collar and an A on the sleeves, which is a nod to the 1970’s Canucks uniforms which had Vs on the sleeves.

So was this a great move or a terrible one? If you ask Canucks fans, the answer is… both.

The Canucks have never had universal approval for any logo or jersey redesign, so why start now, right? Here’s a look at some of the highly entertaining reactions from fans today.

They had this guy model for the graphic. pic.twitter.com/ljmOHpNGIe

Wtf is this jersey? Could you be less dramatic. Less appealing?

Should have been Fraser Valley… https://t.co/IGuuP4lLw9

Johnny Canuck: It's. About. Time.

Fixed the Abbotsford jerseys for free. You're welcome, #Canucks. pic.twitter.com/VibPfmvf1E

Who did it better? I say the #WHLGiants. #Canucks pic.twitter.com/shaYoAHw6a

Who wore it better? pic.twitter.com/VRL8PDmw5p

You guys have been trying to make that johnny canuck junk happen for years. congrats lmao

And when you consider the fact they've spent the last 5-6 years branding "We Are All Canucks" as their franchise slogan, this was really the only logical choice.

I have to say while I didn't want the nickname to be the Canucks, now that it is, I like the green jersey and Johnny Canuck logo.

It's something fans have been asking for the NHL team to do for years. Can't have it both ways!#Canucks

Canucks fans finally get what they want! A Johnny Canucks jersey! Oh what? People are whining and complaining? 😂 This fan base man

the sleeves are awesome. Way too much green for my taste personally. and using the Johnny Canuck was an awesome idea…this version of it though, meh

Don’t mind going the Johnny Canuck route but god those have to be one of the ugliest jerseys I’ve ever seen. Huge miss… the owners look to save money on ever corner even with who they hire to make these design’s. pic.twitter.com/65TtPw6MiF

Hipster logo in the valley. Awesome.

This is worse than a Wal-Mart knock-off jersey.