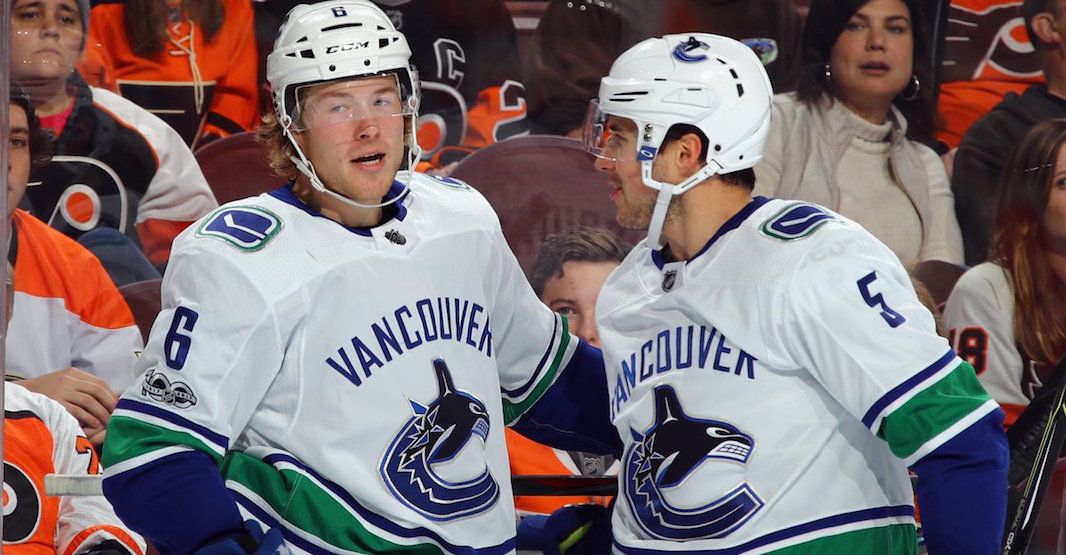 This was a huge win for the Vancouver Canucks.

Coming into Tuesday’s game having lost four of their last five, the Canucks desperately needed to get back on track.

Playing the first of a six-game road trip, you had to wonder if the Canucks would look as good on this road trip as they did on their first.

Jacob Markstrom made 36 saves and Brock Boeser scored twice as the Canucks won 5-2 over the Philadelphia Flyers.

The Flyers opened the scoring on a goal from Ivan Provorov, but should it have been allowed?

It sure looks like Boeser gets interfered with on his way to cover the point, which gives Provorov some extra time to get his shot off.

You could tell Boeser was mad about the non-call on the Flyers goal, and he channeled that anger on his very next shift.

After Daniel Sedin scored to tie the game, Boeser gave the Canucks the lead, and he put an exclamation point on it.

Boeser’s release is great, but watch the subtle move to bring the stick blade closer to his body. That’s what makes this such a ridiculously hard shot to stop.

It was a very impressive response to a Flyers goal that you could argue never should have been. Last year when the Canucks had an unlucky bounce or a bad call against them, they would often let it define the game.

This time, the Canucks took over the game.

3. Boeser does it again

If his first goal was an exclamation point, I don’t even know what to call this one.

This kid is gonna be a big part of this team for a loooong time (knock on wood).

Remember when he was a healthy scratch to start the season?

Don’t think Vancouver will ever let Travis Green live that one down.

Don’t look now but Boeser is right behind Clayton Keller, tied for second in rookie scoring. Boeser has 19 points in 18 games, just one point back of Keller in five fewer games.

No, your eyes aren’t deceiving you, Guddy fans. It’s another great play from your boy.

Both Omar and I have been critical of Gudbranson on the SixPack this season, but we can admit when he makes a nice play.

Last game Omar outlined a great hit, and in this one Gudbranson had a key defensive play in the third period that made me do a double take.

Ben Hutton somehow gets WAY out of position here, coming all the way past the right face-off dot to say hello to Gudbranson.

That puts Gudbranson in a terrible spot, but he recovers to tie up Sean Couturier’s stick. He’s also able to disrupt Jakub Voracek once the puck rolls over to him.

If Gudbranson isn’t there, Couturier feeds Voracek who probably scores in that spot, and it’s a one-goal game.

Great play Gudbranson? I guess it doesn’t sound that weird.

5. From Vanek, with love

Is it a Sedin? Is it Joe Thornton?

We’ve seen this a lot from Vanek this season. He’s got a great shot, but it’s surprised me how adept he is at getting passes through traffic.

Teams are watching, and Vanek is performing. Good news for fans hoping for a return for him at the trade deadline.

And for all the talk (before the season) about Vanek being a defensive liability, I haven’t seen him cost the team any goals this season.

Both Sedin twins had a great game, but I’m giving the tiebreaker on this one to Daniel because not only did he score, he did it on a breakaway.

A Sedin on a breakaway these days is a rare sighting.

The ref didn’t signal the goal on the ice, but a quick video replay showed it was clearly a goal. Given the Sedins’ history of converting breakaways though, you almost can’t blame the ref for thinking it didn’t go in.

And another two point night means Daniel inches closer to that glorious milestone.

“Any rhyme or reason why this team has been better on the road than at home this season?”

“We play a more simple game. At home I think we try to do too much and that’s usually not good.”

It could have just been one of those rehearsed hockey interview answers, but it’s an interesting thought.

Admittedly, I expected the Canucks would be a much better at home than on the road this season since Green is so keen on line matching, but so far the opposite has been true.

If the Canucks really are better on the road, they’re in luck. They’ve got another five games before they head back to Rogers Arena on December 2nd.

The next stop is in Pittsburgh on Wednesday, where the Canucks take on the defending Stanley Cup champs.