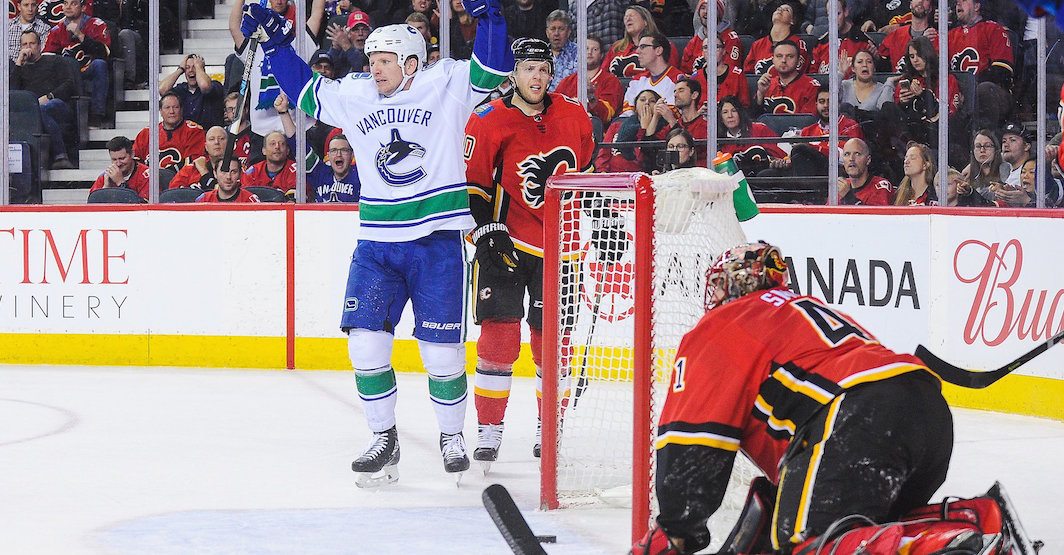 Are you not entertained?

Eight goals, highlight-reel saves, and tons of chances at both ends; this was a fun hockey game to watch.

For the first 40 minutes though, the Canucks got away from the gameplan.

They relied on superb goaltending from Jacob Markstrom and some timely goals to stay even heading into the third.

But when the third period came, credit the Canucks. They came out and outplayed Calgary convincingly in the final 20 minutes, despite having played in Vancouver the night before.

In the end, five different Canucks scored and Markstrom made some dandy saves in a 5-3 victory over the Flames.

I was going to give this honour to Markstrom tonight, but then I thought back to the first six minutes of the game. The Canucks were flat, and the Flames scored to go up 1-0 early.

It was looking like it was gonna be another one of those games.

You know, the kind of game you saw at least a dozen times last year.

But while the Canucks weren’t sharp to start, Travis Green was.

You have to be confident challenging an offside so early in the game with the new penalty rule in effect, and Green was bang on. It allowed the Canucks to get the first goal instead, and ultimately changed the outcome of the game.

You didn’t think I would disregard Markstrom entirely did you? Of course not.

Despite playing on back-to-back nights, he was incredible. You could put together a solid top 10 saves montage from just that game alone.

So, here’s a quick montage.

3. Gaunce in, Granlund out

The only lineup change from Monday’s game was Brendan Gaunce drawing into the lineup for his first game of the year. He replaced Markus Granlund, who suffered a minor injury against the Red Wings.

Gaunce looked very much like he did last season. Very safe defensively, and very non-existent offensively. You know what you’re going to get when you put Gaunce on the ice.

I think Green likes that predictability, because he was fifth among all forwards in ice time, and also saw some time in the final minute with the Canucks defending the lead.

It probably helped his case that he made a great defensive play on the first shift of the game.

Still looking for his first NHL goal, he had a chance at an empty net but wasn’t able to get a shot off.

That means we’re still waiting for an answer to this one.

It was only a matter of time.

After the inexplicable hot start to the season for Derek Dorsett, he had gone four straight without a point.

Many were left wondering if Dorsett’s days of minimal fantasy hockey relevance were over, but he came through once again on Tuesday, in true Dorsettian fashion.

It’s no secret I (along with many others) haven’t been a fan of Gudbranson’s play in Vancouver. Tuesday night was no different.

He’s never been an advanced stats darling. He came into the game last among Canucks defenders in shot differential, and it isn’t really close. It also might not be coincidental that his most common partner (Del Zotto) is second last.

Analytics certainly aren’t everything, but he looks bad on the eye test too.

One play in particular stood out to me. It was on the penalty kill, which is supposed to be where Gudbranson shines.

Gudbranson attempts to block the shot and misses, which results in a double screen on Markstrom. Missing a blocked shot happens, but it’s his positioning here that’s the issue. 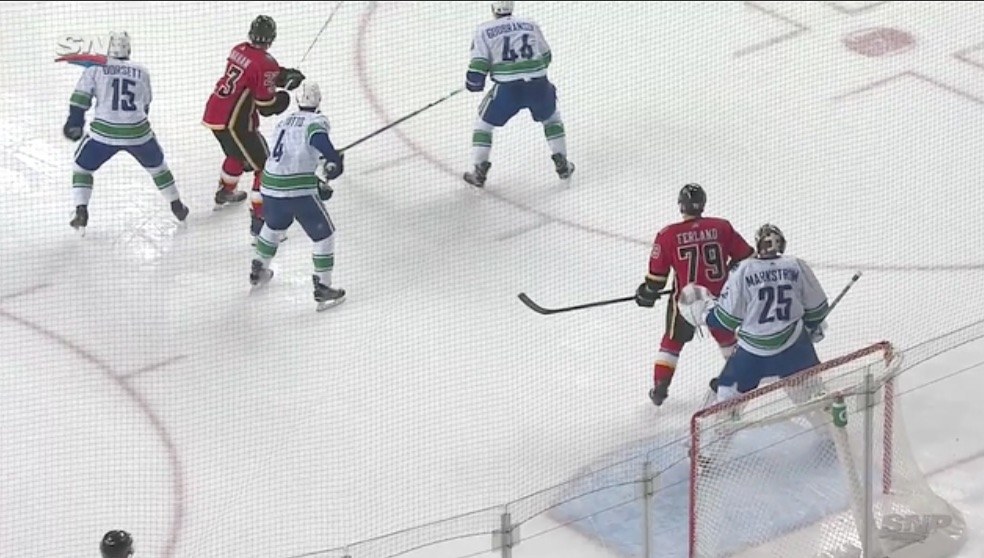 As Gaudreau prepares to shoot, Gudbranson is standing completely still. Del Zotto is tying up his man in the middle, and Gudbranson’s guy is standing unchecked right in front of the goalie.

After he gets out of position, Guddy needs to make a choice. He could retreat, attempting to let Markstrom see the shot and tie up Ferland on a potential rebound.

His other option is to go all-in, challenge Gaudreau as he winds up and get in a better position to block it.

Instead, he stays in the happy middle, and the result is a goal against.

With two assists on Tuesday, Daniel Sedin is now just six points away from the prestigious 1,000-point club.

His brother Henrik hit the milestone in January of last season, and it’s just a matter of time for Daniel.

If he keeps pace with this season’s production, he should get it done just before the Christmas break.

Could be before that though if he has more bursts of speed like this one.

Where did that come from?! Perhaps limited minutes is paying off with the Sedins.

It was far from a perfect game, but the Canucks found a way to win, and improve to 5-1 on the road this season.

They’ll look to make it 6-1 when they visit the Anaheim Ducks on Thursday.