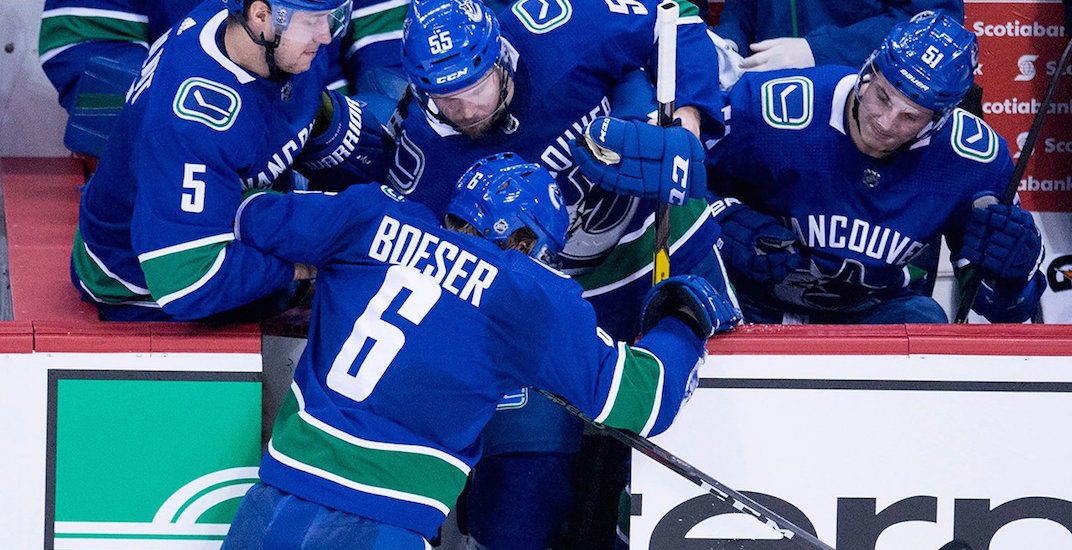 You think you’ve seen negativity around the Canucks before?

The Messier era? Social media being around would’ve made that a lot worse.

The Game-7 loss in 2011? Hey, at least the Canucks were still good back then and could look forward to another chance next season.

Brock Boeser injured against the Flames in Sunday’s game?

This team’s has been horrible since Vancouver lost to Calgary in the playoffs. They’ve played boring hockey, management has made mistake after mistake, and then finally, finally things started looking up because Boeser and Pettersson have been doing amazing things.

So this injury, this was a punch to the gut.

Twitter after that injury? Dark doesn’t begin to describe it.

With Boeser hurt, why would anyone watch a #Canucks game right now?

#Canucks Just can’t have anything nice.

LINDEN: I got good news and I got bad news
BENNING: gimme the bad news first
LINDEN: we’re losing 5 nothing and Boeser is out long-term
BENNING: and the good news?
LINDEN: life is short and then we die

No, it was not beginning to look a lot like Christmas.

The Canucks were down 1-0 when Boeser went down. With him in the lineup, there was a good chance Vancouver had goals coming.

After he was injured, the Flames scored four straight in the second. Vancouver lost 6-1 to Calgary.

And in reality, they lost a lot more than one game.

Boeser was seen on crutches after the game.

Brock Boeser in the tunnel during jersey off the back ceremony on crutches. Walking boot on his foot. #Canucks

So… let’s try to look at some positives.

Never want to see anyone get hurt but Boeser being out will help this team in the long-term. #teamtank

First, the Canucks were probably not making the playoffs this season but Boeser was keeping them afloat. This won’t hurt their chances at a Cup, just at being buyers come the trade deadline, which no sane person really wanted anyway.

Second, as far as injuries go, it could be a lot worse. We’ve seen the lasting effects of concussions on Daniel Sedin and Markus Naslund in the past, and we’ve seen how devastating knee injuries can be with Pavel Bure and Naslund again.

A broken bone? Four-to-six weeks or less and the player is right back out there. They can usually keep their fitness up by getting back on the bike just weeks into it as well, so hopefully Boeser can hit the ground running as soon as he’s back on the ice.

Third, add Boeser to that list of injuries, this is the only thing happening with the Canucks now.

Horvat AND Tanev out? Time to dust off this bad boy. #thetankisback #Canucks pic.twitter.com/yyEUns8sju

Again, in the long term it might be for the best.

The reaction’s not necessarily a good thing, but his look after seeing Boeser injured at the start of this gif might make you crack a smile at least.

Maybe we’ll get to see more of Virtanen? He played nearly 14 minutes against the Flames, and better, he’s aware he needs to go to the net.

Love that Ann Schmalz asked Virtanen about it.

Virtanen is aware many people want him to drive the net. “I’ve heard. I think I’ll continue to do it. I have the speed and size. I’m going to try to do it as much as possible.” #Canucks

He didn’t have too many chances to drive the net in this one, but he was definitely involved in the game.

The fan in the grey turtle neck was loving it.

Hey, Virtanen gifs and the World Juniors might be all Canucks fans have to get through Christmas and New Years. Embrace it like she did and you’ll be happier.

Maybe some more magic from Goldy too?

Back in the first period, when this SixPack wasn’t going to be all doom and gloom, I grabbed this gif of Goldobin and was getting excited to grab more in the upcoming games.

He picks up the puck on the right faceoff dot here.

Couple days ago the Kurtenbloggers were arguing when Halford said Gagner has a bit of Wellwood’s niftiness in him. Brough was not impressed with the take, and neither was I as I listened along on my trusty transistor radio at home.

Know who has some of Wellwood’s niftiness? Goldy.

This was in the third period.

Just a few days ago Green was saying not many players can get by without hard work – players who can slow down the game are few and far between. Thing is, with the vision and skill Goldy has, he actually has the ability to make the game go at his pace.

There’s been a bit of a debate around if Vancouver’s power play was revived because of Boeser or because assistant coach Newell Brown figured things out.

Well, it scored without Boeser in the third period.

Now, if you’re wondering if this is a sign the power play can continue to score without Boeser, think about if this was a repeatable, sustainable power play goal.

Vancouver did good work along the boards, and Granlund got the puck to the net, but that rebound… you won’t see too many that juicy.

6. Gaunce to the rescue?

With Boeser out, maybe Gaunce can pick up the slack and help out in the goal department?

What do you guys think?

Just dump it in and go for a change.

So you’re not believers.

Andy thought of a way Gaunce can help.

GREEN: Ok Gauncer, I got a special assignment for ya
GAUNCE: I’m ready coach! *puts one leg over bench*
GREEN: We need to amputate your foot and give it to Brock Boeser