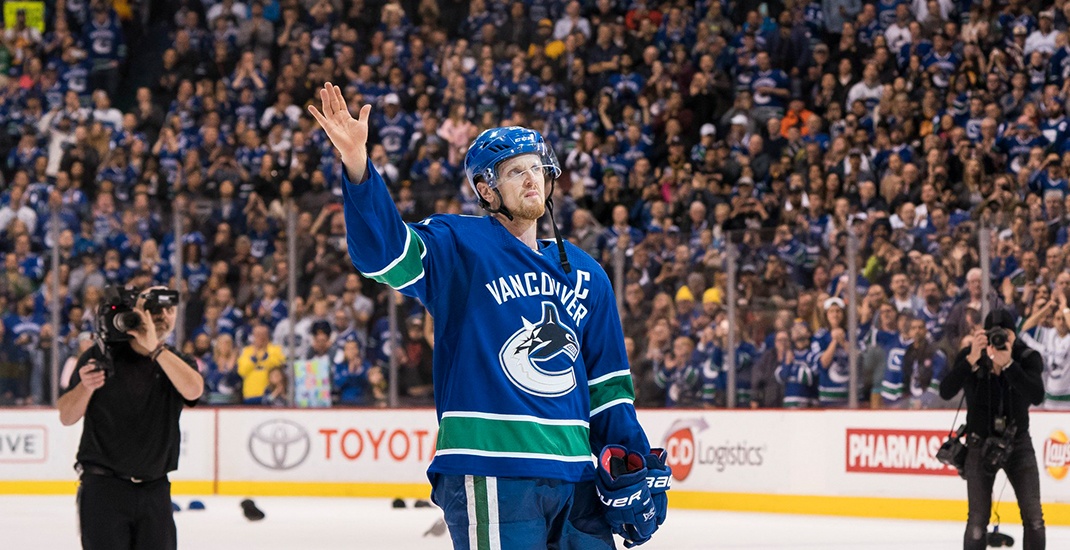 The bittersweet excitement had been building from even before the puck dropped. Since Henrik and Daniel Sedin announced their retirement earlier this week, Canucks fans have been bracing themselves for the end of an era.

After Tuesday’s second-last game on home ice, all eyes turned towards Thursday night’s game – the last time the twins would lace up and wear the blue and green at Rogers Arena.

And while the Sedins have been known to be camera shy, turning the spotlight away from themselves, Thursday’s game against the Arizona Coyotes was all about the two of them. From the moment the game began to the scripted overtime winner, it was perfection.

Canucks fans around the city, and world, have taken to social media to express their joy, love, and respect for the Sedins.

Great night. Great careers. My only regret is that the twins didn’t get a chance to hoist the Cup. They deserved it! #ThankYouSedins pic.twitter.com/HcPIq36qSu

Gutted I’m not in Vancouver to watch their final home game tonight. Thank you for all the great memories. @Canucks #ThankYouSedins pic.twitter.com/WBQEvFhRhE

Tonight the Sedins reminded us all to try to be just a little better and a little kinder, every day #ThankYouSedins

Going to miss the Sedins! Thank you for all the hard work you guys did for the Canucks and the community. #ThankYouSedins #Canucks #Sedins #Legends

We will never see two players of this caliber and class again in a lifetime, #ThankYouSedins for everything you’ve done for the game and city. If the younger players take note, this is what being a true professional takes. #cuttingonions all night long @Canucks

Didn’t think it would be this hard to say goodbye to two of the best people and hockey players Vancouver has ever seen, those two holes will never be able to be replaced with you two special players gone #ThankYouSedins #endofanera

Grew up following you guys, from draft year to your magical hall of fame careers. You’ll always be in the epitome of class, honor and sportsmanship. The way the game should be played. Respect. #ThankYouSedins pic.twitter.com/OmoYfH3DWa

Hands down best sporting event I’ve ever been to. We’ve been so lucky to have such incredible people and athletes representing our city for 18 years. I’m not ready for life as a Canucks fan without Henrik and Daniel! #ThankYouSedins #Canucks pic.twitter.com/ZpSPT2qMPJ

Had to end this way. Just had to. Chills. #ThankYouSedins 🧔🧔 https://t.co/BTFPT467nY

My voice is hoarse, my heart is full, that was the best game I’ve ever been to. They stuck to the script, and then some. #ThankYouSedins https://t.co/VeyVoWH4iD

The Sedins single handedly filled the seats tonight and brought back that deep passion us fans had tonight, the rest of the @Canucks played their hearts out for them and us to get us this win tonight. #ThankYouSedins #ThankYouCanucks

I LOVE how the Sedins played their entire NHL careers together and only for Vancouver. We had the honour of watching them grow from fresh faced kids to the incredible men they are today. They gave it all they got and did Vancouver proud. #ThankYouSedins 💙💚

Wow can’t believe that’s a wrap for #thesedins remember them when the first started out with @Canucks back in the day #ThankYouSedins #canucks great guys, great memories, great times #Canada 🇨🇦 #NHL

You can’t write a better ending to illustrious 18 year careers: Daniel Sedin scores the game winning goal in OT in his final home game set by his brother. #ThankYouSedins pic.twitter.com/28VmsbtYVw

#ThankYouSedins for all you have done for Vancouver! This is a moment I will surely never forget. Picture perfect way to finish an outstanding career. #goosebumps https://t.co/y6xxy4HvkV

From that first training camp back in Sweden, I have been privileged to witness countless incredible moments from Daniel and Henrik Sedin, two incredible people and players, but not sure anyone could have scripted a better finish to it than tonight at Rogers Arena #ThankYouSedins

#ThankYouSedins
For leading our city for 17 years.
For always reminding us why sports are magical.
For everything. pic.twitter.com/AHGbF5Mgjs

Thank you for everything!!! It was a privilege to watch you guys playing all these years and especially tonight’s game! #ThankYouSedins pic.twitter.com/esRJZDd9TM

Too small. Too frail. Too weak. Too slow. Too passive. Too “pass first.”
Too modest. Too selfless. Too thoughtful. Too heroic. Too legendary. Too unforgettable. Too perfect. Two brothers. Two legacies. #ThankYouSedins

From the bottom of my heart, #ThankYouSedins for everything you’ve done. I am not ashamed to tell Twitter I started crying after that beautiful OT goal only by Daniel Sedin. Thank you for everything. I mean it. Forever Canucks. Forever faithful. We love you guys. @Canucks

One of the best Canucks games I’ve ever been to, and one that I’ll never forget. What a send off, storybook ending. #ThankyouSedins

#ThankYouSedins @TransLink @Canucks even the Canada line is thankful for the twins I love it. pic.twitter.com/W5qFT2OOfd

Hockey has been a major part of my life growing up until the end of high school. Even though I haven’t watched in many years, these two guys have been there since the beginning and I’d be lying if I said I wasn’t emotional #ThankYouSedins https://t.co/CCyAqzljoT

I grew up watching these two play for @Canucks. I’ve teared up more times than I should admit since they announced their retirement a few days ago…. Congrats on two outstanding careers, we won’t be the same without you! #ThankYouSedins https://t.co/Uma8XF7PXu

Ted Williams hit a home run in his last at bat at Fenway. John Updike wrote what might be the best piece of sportswriting about that game. I feel like I saw something on that level tonight. There will never be anything like these brothers again. #ThankYouSedins

There aren’t 2 more well rounded athletes in the world

Henrik and Daniel gave everything they had to the #Canucks

“Don’t cry because it’s over, smile because it happened”#ThankYouSedins

@Canucks @RJHenderson7 @BlakePriceTSN @mattsekeres I was sad when it started, but, The city just showed sedins what they taught us. Class. Respect. And always get back up. We will miss you but we won’t stop. #ThankYouSedins #Sedins #Canucks

It simply doesn’t get any better. Nearly two decades of greatness coming to an end with the ultimate display of magic: Sedinery #DanielSedin #HenrikSedin #ThankYouSedins #Canucks

If it werent for this tournament called The Masters, I would be there to send off the Sedins. Guess this view will have to do! Congrats on an incredible career on the ice and for being even better people off of it! The city of Van was lucky to have you! pic.twitter.com/r5MY4DXTj4