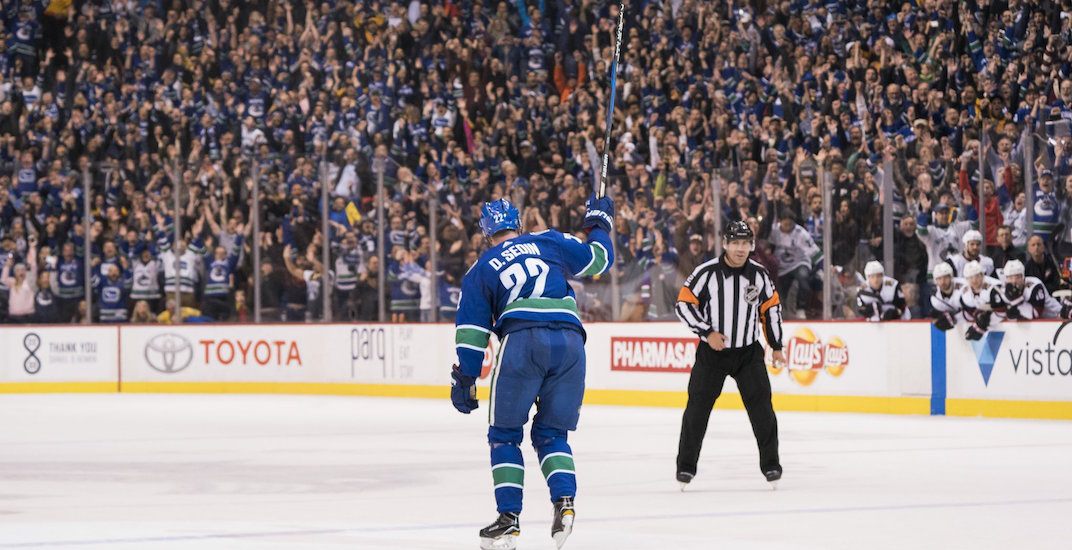 It couldn’t have ended any better.

Daniel Sedin scored in overtime – assisted by Henrik of course – to cap off their last ever home game with a win.

You could watch this all night long. From the OT winner to the final farewell. Tonight was a good night. #ThankYouSedins pic.twitter.com/IRA8wSEeUm

What a legendary moment.

It was a huge and energetic crowd all night at Rogers Arena, and the roof blew off the place when the puck went in.

It’s been an emotional few days since the Sedin twins announced their retirement at the end of the season, and Daniel scoring (at the 2:33 mark of overtime no less) was the perfect send-off for the two greatest Canucks of all-time.

The goal also gave Henrik his 23rd career overtime assist, which makes him the all-time leader.

It was the second goal that the Sedins connected on in the game. Henrik made a beautiful move, dishing the puck to Alex Edler who sent it to Daniel for a tap-in.

Goal No.392 for Daniel Sedin, in all its gloriousness. #ThankYouSedins pic.twitter.com/R8FyA8X8TZ

Incredibly, that was Daniel’s 22nd goal of the season, scored at the :33 second mark of the second period. You can’t make this stuff up.

Two goals for Daniel, both assisted by Henrik in a 4-3 OT win over the Arizona Coyotes.

The atmosphere for this game was on par with the 2011 Stanley Cup playoffs. Fans were there early and kept the energy up throughout the game with chants like “Go Sedins Go” and “Hall of Fame.”

What a crowd for the start of warmup #Canucks pic.twitter.com/DE8699RFHg

Before the third period, with the Canucks down 3-1, Johnny Canuck led the fans to do the Viking Clap, much to the pleasure of Henrik.

The team rallied on goals by Jake Virtanen and Brendan Leipsic before Daniel ended it in overtime.

After the game, the Sedins stayed out for one final emotional moment with the Vancouver fans.

Thank you Sedins, for everything you did on and off the ice for 18 years.