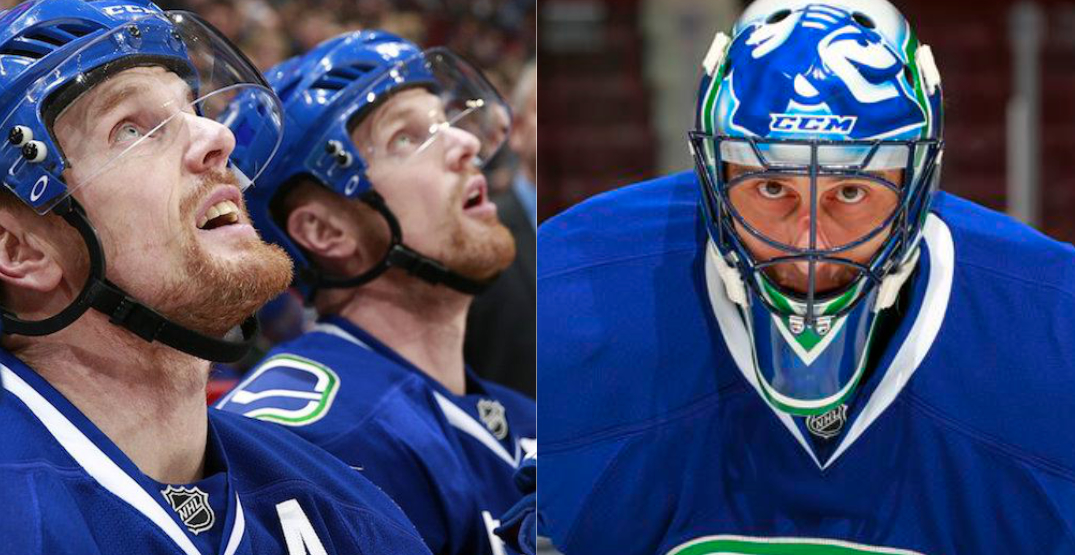 In the end, it only made sense for the Sedins to make the Hall of Fame the same day as Roberto Luongo.

Three of the most iconic Vancouver Canucks players in franchise history were officially selected for the Hockey Hall of Fame’s 2022 class on Monday.

The twin brothers Henrik and Daniel Sedin, as you surely know, spent their whole career with the Canucks after being selected at second and third overall in the 1999 NHL Draft.

Luongo spent eight seasons in Vancouver, while also playing for the Florida Panthers in two stints and one year with the New York Islanders in his rookie season.

All three were integral parts of the Canucks team that made its way all the way to the Stanley Cup Final in 2011, Vancouver’s most recent appearance in the championship series.

Their accolades speak for themselves: two Art Ross Trophies (one for each brother), a Hart Trophy (for Henrik), and a 2010-11 Jennings Trophy for Luongo as the recipient of the NHL’s lowest goals against average. The two brothers combined for 2112 points in their career, while Luongo’s 489 career wins rank fourth all time.

Since leaving the NHL as players, the three have all found work in front offices: Luongo as a special advisor to the general manager in Florida, while the Sedins work role in Vancouver’s  player development department.

Here’s how Canucks fans reacted to the news of the Sedins and Luongo being named to the Hall of Fame:

We were so lucky to witness this era of the #Canucks. Well deserved recognition for these three greats, https://t.co/zO71FmNVny

I take whatever good news I can get these days so hats off to the Sedins and Lu, three of the very best

3 legends all going in at the same time on the 1st ballot.

One of the greatest days in Vancouver Canucks history. https://t.co/HJBQcqSlLd

3 of the greatest canucks going in as one👏 https://t.co/ZdHFWouAAJ

All is right with the Universe!

They should have done the Sedins in different years just so they had to be apart once. 😂🤣

Luongo himself, via the unverified-but-everyone-knows-it’s-him @strombone1 account tweeted his reaction to the news:

The Hall of Fame induction will officially happen this fall in October in Toronto.