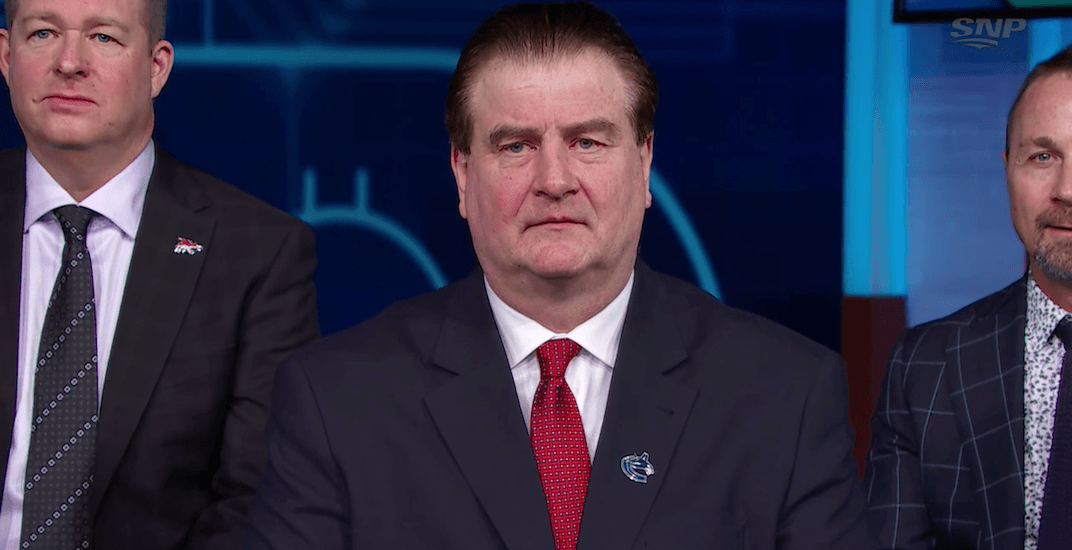 We should have known better.

Every year, Canucks fans find a way to forget the cursed nature of the franchise they love so dearly. Every year, they find some semblance of hope and belief.

‘Maybe this year will be different.’

‘Whatever, as long as they don’t drop again.’

This year, at the encouragement of TSN 1040, fans came prepared with lucky charms.

The Canucks have turned us all into lunatics pic.twitter.com/yDWJsdVPcS

While others looked to a higher power…

I may or may not have spent some extra time in our chapel today. 🙏🙏🙏 #Canucks pic.twitter.com/F16Y4qb0SI

Former Canucks goalie Eddie Lack got it half right…

Oilers winning the lottery. You heard it here first. Oh and sorry canucks fans you’ve been great at drafting last few years but you’re terrible at this lottery thing😂

And here we are.

The Canucks dropped in the draft lottery for a fourth year in a row, the only NHL team that holds that distinction since the league began deciding the first three picks with a game of chance in 2016.

Part of that has to do with the fact that most teams aren’t in the draft lottery every year. Most teams find a way into the playoffs every now and then.

Vancouver had a 48.8% chance of holding the ninth spot, but dropped down to 10th because Chicago vaulted ahead of them from No. 12 to No. 3. Yes, those are the same Blackhawks who missed the playoffs for the first time in forever after being one of the most successful franchises in the league over the past decade.

Here’s how the #Canucks go into the 2019 #NHLDraft after falling to 10th in the NHL #DraftLottery. Thanks Hockey Gods 😐 pic.twitter.com/N56My3qJtM

I bet New Jersey would have offered more for Taylor Hall if they knew he was going to bring his draft lottery luck with him from Edmonton. He’s two-for-two with the Devils.

They talk about Gretzky’s 92 goals or Sittler’s 10 pts in one game as records that may never be broken. But winning 5 draft lotteries in your first 9 years in the league? In 2 different draft lottery eras, no less. That is a record that will stand forever.

Well, here’s the rest of the reactions from Canucks Nation. Warning: it wasn’t pretty:

WTF. THIS DRAFT LOTTERY. PISSES ME OFF. #Canucks

EVERY YEAR THE CANUCKS SLIP IN THE LOTTERY WTF

Why do we as @Canucks fans ever get our lottery hopes up?

ANNNNNND WE'VE BEEN ABSOLUTELY FUCKED YET AGAIN!!! #Canucks WHAT A FUCKING JOKE…… I FUCKING HATE THE LOTTERY SO SO SO SO MUCH…

The @Canucks once again slipped in the draft lottery, from 9th ➡️ 10th overall.

This lottery thing is never ever going to go the #Canucks way 😡. The hockey gods did not listen to my plea 👎🏾

This is so rigged. What the hell. We never win. The graphic was real. I hate this shit so much. #Canucks

Death, taxes and crying myself to sleep after the draft lottery.

I DO NOT WANT TO HEAR ANYMORE OF THAT TANK BULLSHIT !!!

Being a Canucks fan is Very Cool in my opinion and I'm Okay with everything pic.twitter.com/PU2uFsDX0W

Seriously @NHL you gotta fix this #DraftLottery shit.. or quit doing it behind closed doors! How does Vancouver get shot on every damn year?!?!#Canucks pic.twitter.com/ucl622J5MN

im so mad about the hawks. like the canucks ! the fucking canucks !!!!!!!! deserve that. they're ass and they've been rebuilding. and a team that literally jUST stopped making the playoffs is gonna get the 3rd pick? rigged