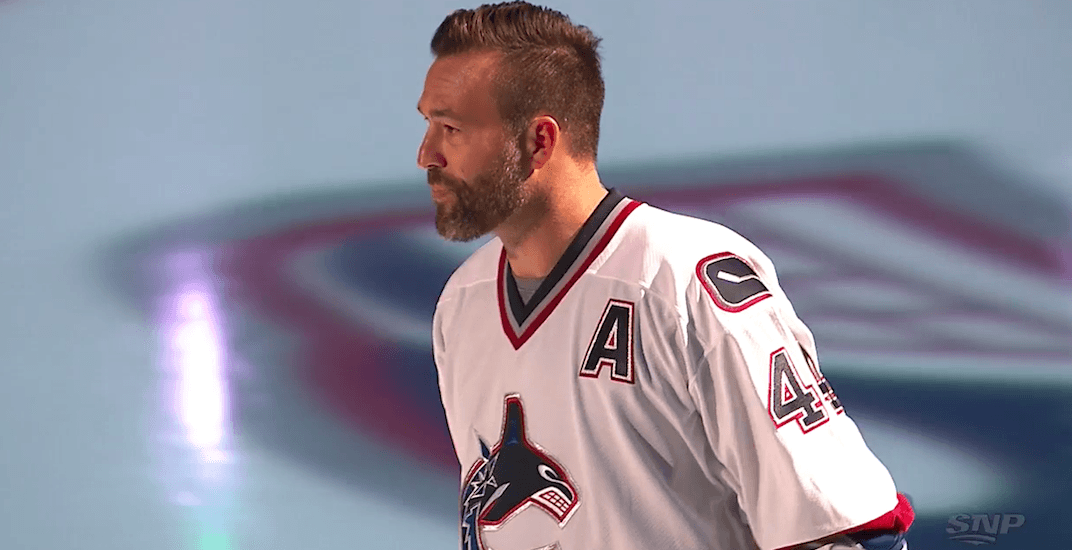 There were so many highlights from the Vancouver Canucks’ 8-2 victory of the Los Angeles Kings you’d be excused if Todd Bertuzzi’s surprise appearance during the pre-game introduction slipped your mind.

The Canucks introduced Bo Horvat as new team captain, and celebrated their past with appearances from a number of former players, including Dennis Kearns, Stan Smyl, Kirk McLean, Daniel Sedin, Henrik Sedin, and Orland Kurtenbach.

But ask anyone what received the loudest cheer of the night and they’ll tell you Bertuzzi’s Steve Austin-like return was at top of the list.

For those who were weren’t around for Bertuzzi’s career in Vancouver, he was truly one of the most dominant power forwards in the early 2000s in the NHL. He had size, power, speed, and skill – that rare combination every NHL GM chases when they draft the Steve Bernier and Taylor Pyatts of the world. “Is this the next Todd Bertuzzi??” has been uttered so many times in Vancouver that it’s almost shocking a local craft beer company hasn’t made that a label for one of their bottles.

You almost wonder if the West Coast Express era will be forgotten by fans, sandwiched in between the two most famous Stanley Cup Final runs in Vancouver history (made all the more sadder as this was a team that dragged Vancouver out of the dark Messier era).

For those who remember the time when Markus Naslund, Brendan Morrison and Bertuzzi took over the NHL, it was arguably the most exciting team to watch in Canucks history. Don’t get me wrong, the 2011 core was a beast of a team, but they were almost clinical in the way they dissected opponents. If they were a TV show, they were Dexter, tearing teams apart piece by piece all while narrating it in a monotone voice.

The West Coast Express days in comparison were like the wild west. North-south hockey all over the ice. A defensive core that had an open relationship with defence, and was more interested in scoring goals and blowing people up with huge hits. A goalie in Dan Cloutier that taught people about anxiety disorders, because there was no way to watch him in net without flinching at every shot directed his way. The team could lose 9-5 as easily as win 7-1, but they were so talented that their offence usually carried the day.

It was a rambunctious, exciting time, one that peaked in 2003 when it felt like they had an open road to the Stanley Cup Final only to fall to the mighty…Minnesota Wild? (It’s best we don’t talk about it).

We all know the story of how it ended, though. Todd Bertuzzi tragically ended Steve Moore’s career with a punch, and it forever altered the path of Canucks hockey. We would need another article to truly go over the months that followed March 8, 2004, but to summarize it quickly, it was a very exhausting time. Everything from defending Bertuzzi, to the rest of the league attacking Vancouver and its fans, to the media, the NHL, and the fans accusing each side of fostering a violent culture, to people having to come to terms with the fact that one of their heroes did in fact do something very terrible, all left behind a lot of heavy emotions.

From Bertuzzi to Bo, opening night was a special one for #Canucks fans 💙💚 🎥: @irfgaffar

Bertuzzi may have been traded in the summer of 2006, but for all intents and purposes, the West Coast Express era came to an end after the Moore incident. And with it, so arrived the Luongo era, seamlessly moving onto the next big period in Canucks history.

Bertuzzi, someone who never looked comfortable in the spotlight at the best of times (he made the “it is what it is” quote famous), quietly played out his days in Florida, Anaheim, Detroit, and Calgary, with both sides seemingly happy to avoid each other in the hallways at lunch, both trying to move on with their lives.

Which is why it always felt like people never got to say a proper goodbye to the big man from Sudbury, a player who had such a huge impact on the franchise. A lot of people in this province grew up with Bertuzzi being their favourite player, his poster on their wall glaring down at them.

Bertuzzi’s ability to not only score highlight reel goals and be an elite playmaker, while also being able to crush opponents into the ice, was the stuff of legends. In the 2003 playoffs against St. Louis, it was a Todd Bertuzzi hit that wrecked Al MacInnis’s shoulder, effectively shutting down the Blues best defenceman. There was the time he destroyed everyone’s favourite villain Chris Chelios into the boards, getting a cheer that rivalled most goals. It was watching him drop someone on one shift, then dangle through three guys to set up Naslund for a goal on the next shift that made it easy to love his style of play.

They made a song about him.

When Bertuzzi showed up at the Canucks home opener last night, it felt like a huge moment, because it was. Bertuzzi and this franchise went through some real heavy stuff together, and seeing it being put behind by both sides was a very cathartic moment.

It was a chance to show appreciation to a hockey player that entertained so many people. A chance to send Bertuzzi off properly. A chance for both sides to smile at each other and remember the good times they had, all those years ago, that it was ok to cheer him again. Seeing Bertuzzi happy to be in a Canucks uniform was something you just never thought you’d see again, but there he was, getting the loudest cheers of any player introduction.

Saying goodbye to Bertuzzi, then watching Bo Horvat captain his team to an 8-2 victory, reminiscent of many of the beatings the West Coast Express laid out on people, was a storybook ending, to be honest. How often do you see Chris Tanev lead an odd man rush with another defenceman?? That was straight out of Ed Jovanovski’s playbook.

For a team that is running with the slogan “Colourful past. Bright future,” for the season, last night couldn’t have echoed that sentiment any better.