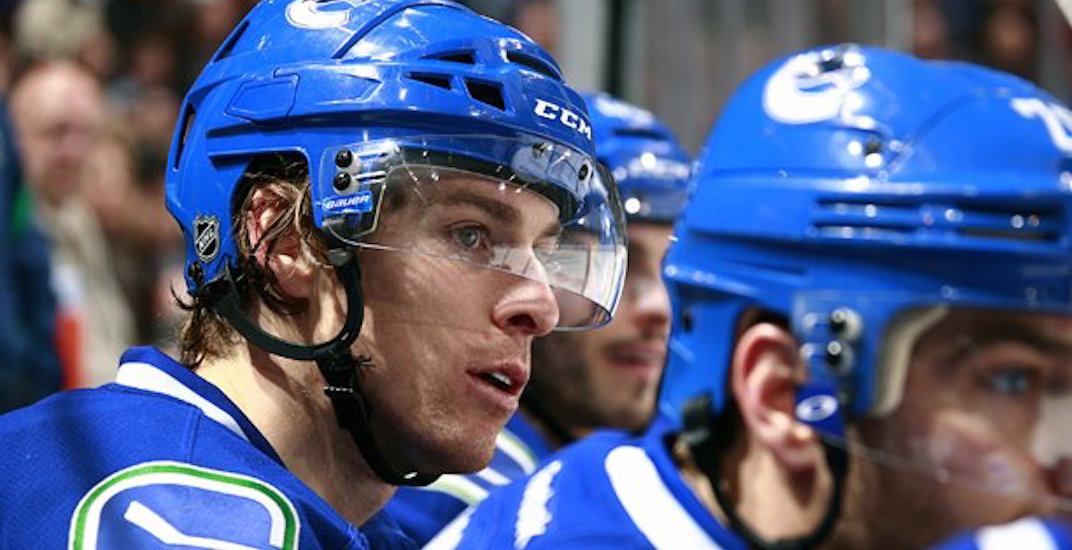 David Booth did something not many people have been able to do in a long time.

That’s great. The way he accomplished it, not so much.

The former Vancouver Canucks winger, who is American and played with the Detroit Red Wings last season, weighed in to the Colin Kaepernick debate following the debut of a Nike commercial featuring the former NFL quarterback.

“Believe in something even if it means sacrificing everything” does this mean you can fly a plane into a building? How can so many people @Nike be this ignorant as to the logical fallacy this entails. This is absolute absurd. I really don’t understand. Why would u support this?

It shouldn’t come as a surprise that Booth sides with Donald Trump on the Kaepernick debate given everything we know about him, but this takes it one step further.

The meaning of the slogan “believe in something even if it means sacrificing everything,” is not confusing in the least given that Kaepernick is the one saying it. Everyone knows what it means, whether you agree with what Kaepernick did or not.

Many slogans are not to be taken literally. Skittles doesn’t want us to literally “taste the rainbow” and Red Bull doesn’t actually “give you wings.” They have figurative meaning and convey a message.

Kaepernick has effectively been blackballed by the NFL. The 30-year-old is good enough to play in the league, perhaps as a starter or definitely as a backup, but no team has offered him a contract since his protest.

He could have committed an actual crime, like many football players have done before, and received another contract. But kneel during the anthem and your career is over.

By speaking out, Kaepernick has put his money where his mouth is. He’s given up millions of dollars by having his career cut short. Millions of Americans now hate him with a passion. So choosing to shine a light on racial injustice in the United States couldn’t have been easy.

Those that want to discredit Kaepernick choose to act like he’s committed the worst sin imaginable by kneeling for the national anthem, despite the fact that Kaepernick has been quite clear about what he’s protesting. He’s not trying to disrespect the American military.

The Kaepernick protest initially involved sitting down during the anthem. After speaking to a US Army veteran, Kaepernick decided to kneel instead of sitting down as a sign of respect for military personnel.

So after everything, if you choose to focus on “supporting the troops” instead of what Kaepernick is about, it makes me wonder if you care about racial injustice in the United States.

And just when you thought Booth couldn’t be any dumber, he wrote this:

It’s like telling your son they can become a girl even if there a boy. It’s that messed up

Fans and media roasted him. And rightfully so:

I haven't seen anyone miss this badly since you were playing for the Canucks.

When the Canucks beat reporters universally would describe you as the dumbest player they’d ever encountered, I thought it was just hyperbole. I now owe them an apology.

If I seriously have to explain to you why a pro athlete’s career means more to them than just money then it’s no wonder you’re not in the NHL anymore.

I agree with you Dave. Once I saw a motivational poster that said “never give up on your dreams” and I was like wow, what if your dreams are to amass a small but viciius militia and go on a 26-state killing spree? What a sick message

What you've just said is one of the most insanely idiotic things I have ever heard. At no point in your rambling, incoherent response were you even close to anything that could be considered a rational thought. Everyone in this room is now dumber for having listened to it.

Someone needs to take @D_Booth7's phone away.

"Just do it" Does this mean you should just do drugs if you feel like it? How can so many people @Nike be this ignorant as to the logical fallacy this entails. This is absolute absurd. I really don't understand. Why would you support this?

You're reasoning and critical thinking abilities are evidence against the impact of head injuries. Hope you get well soon.

“Once you pop, you can’t stop?” ARE YOU SERIOUS, PRINGLES? What if the thing that’s popping is a roadside IED? Can’t you see the famed of this logical fallacy???

Hi David. After reviewing the slogan, I have reason to believe it is metaphorical and not a literal mandate to be accepted at face value no matter the circumstances. Happy to help with the clarification here.