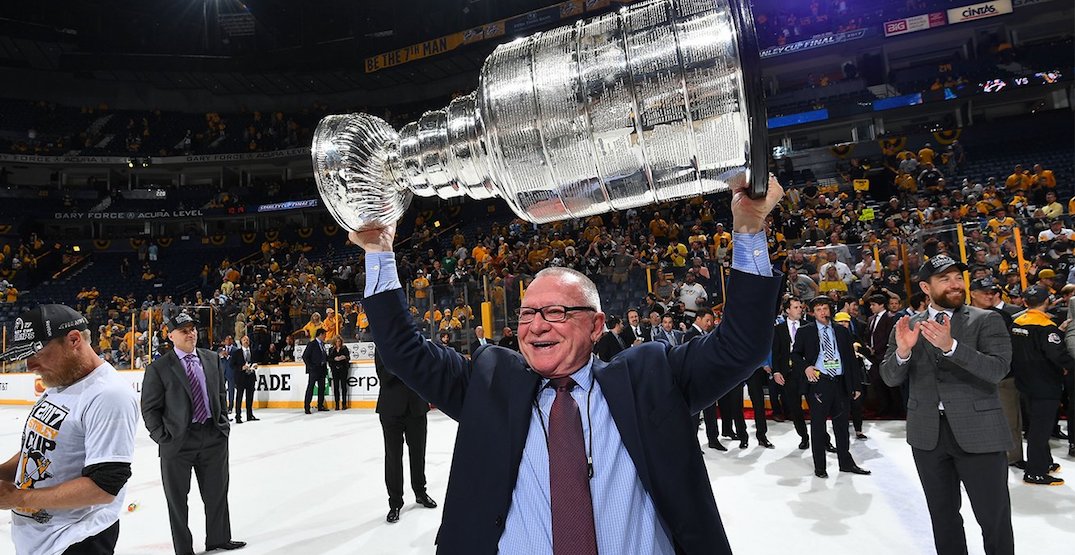 The Vancouver Canucks are on the verge of hiring a big-name NHL executive (Update: it’s official).

As first reported by TSN’s Darren Dreger, the Canucks are expected to hire three-time Stanley Cup winner Jim Rutherford. Pierre LeBrun at TSN says that Canucks owner Francesco Aquilini confirmed the report at the NHL’s Board of Governors meeting.

“He gave it a big thumbs up,” says LeBrun.

Things are escalating between veteran NHL executive, Jim Rutherford and the Vancouver Canucks. A deal is expected to get done, although sources won’t confirm if it’s for the presidents role or both president and GM.

Just quickly chatted with Canucks owner Francesco Aquilini, as he ran into the BOG meeting. He confirmed @DarrenDreger ‘s report that Jim Rutherford has been hired as president and interim GM. He gave it a big thumbs up. @TSNHockey @TheAthletic

Elliotte Friedman of Sportsnet is reporting that Rutherford will be hired as president and will serve as interim general manager.

Jim Rutherford will be President & Interim GM of the Canucks. The goal is to keep looking for a GM he can mentor, that process continues.

Rick Dhaliwal of CHEK is reporting that Rutherford met with Canucks ownership two weeks ago. Dhaliwal adds that the 72-year-old executive would mentor Henrik and Daniel Sedin, as they could take over the top job at some point in the future.

The Sedins were hired as “special advisors” to the general manager in June.

"Apparently Rutherford met with #Canucks Ownership a couple of weeks ago, early word is it is President role. Also hearing the President will mentor the Sedins to take over if they want at some point."@DhaliwalSports on the latest on Jim Rutherford seconds ago. #Canucks pic.twitter.com/8xZALIPI9Z

Rutherford was GM of the Pittsburgh Penguins from 2014 to 2021, resigning on January 27. Under his guidance, the Penguins won back-to-back Stanley Cups in 2016 and 2017. In addition to general manager, he became the executive vice president of hockey operations during his second season in Pittsburgh.

Prior to joining the Penguins, Rutherford served as president and GM of the Carolina Hurricanes franchise, dating back to when they were the Hartford Whalers, from 1994 to 2014. Carolina won the Stanley Cup in 2006.

On Monday, Canucks owner Francesco Aquilini hinted that he may hire a president as well as a general manager. The Canucks haven’t had a president of hockey operations since Trevor Linden and the team parted ways in 2018.

“We’re going to need a leader that’s going to come in, whether it’s a president or a general manager, or a combination of both. We just want to get the right people,” Aquilini said.

“It would have to be… a tandem president and GM to come in together. They know each other, they can work together. Those two people have to work very closely together. You’d have to find the perfect fit, and that’s not easy to find. But that option’s on the table.”