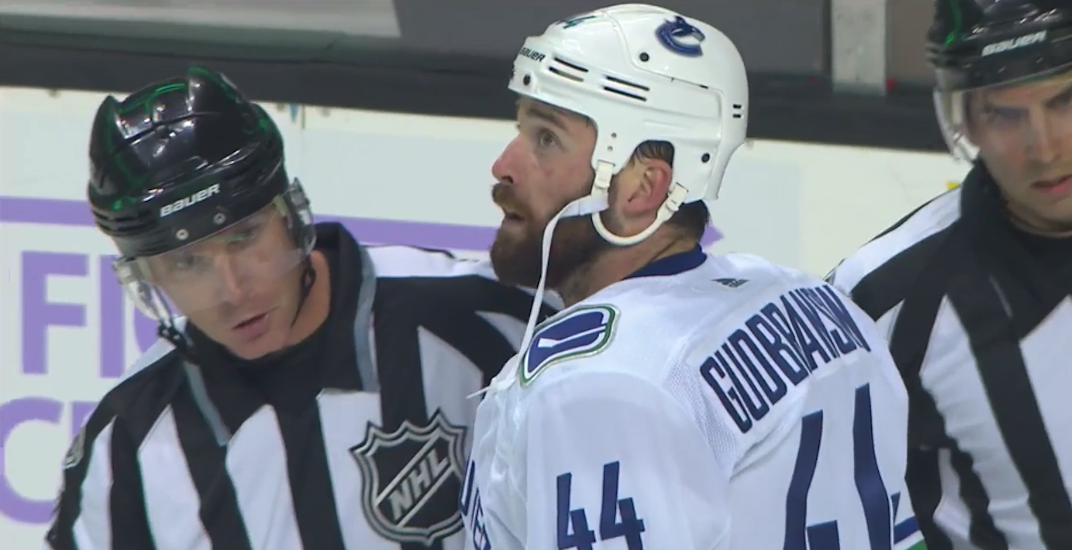 Erik Gudbranson is in trouble with the NHL, after a dangerous hit he delivered during Thursday night’s game in Boston.

The Canucks defenceman has been suspended for one game without pay.

Gudbranson will forfeit $18,817.20 of his $3.5 million salary, with the money going to the Players’ Emergency Assistance Fund.

The incident occurred during the first period, when Gudbranson lined up Boston’s Frank Vatrano on the end boards, delivering a hit from behind.

Vatrano, who is listed at 5-foot-9, 201 pounds, went face first into the glass. He left the game for a period of time, but returned to play in the second and third period.

Here’s another angle of the hit:

Gudbranson received a five-minute major for boarding and a game misconduct for his actions. That, coupled with the fact that Vatrano returned to the game, likely helped keep the suspension to one game.

Though Vatrano turned his shoulder slightly, Gudbranson had time to alter his hit. He chose to explode into the Bruins forward, hitting him in the numbers.

The Canucks went on to lose the game 6-3. The team will try to put the Bruins game behind them, as they play again on Friday in Buffalo, against the Sabres.

Alex Biega will draw into the lineup for Gudbranson and the team has called up defenceman Patrick Wiercioch from Utica, though it remains to be seen how Travis Green will deploy his blueliners. The Canucks coach could move Troy Stecher into a top-four role, playing him with Ben Hutton on the team’s second pairing. That would leave Derrick Pouliot and Biega on the third pairing.