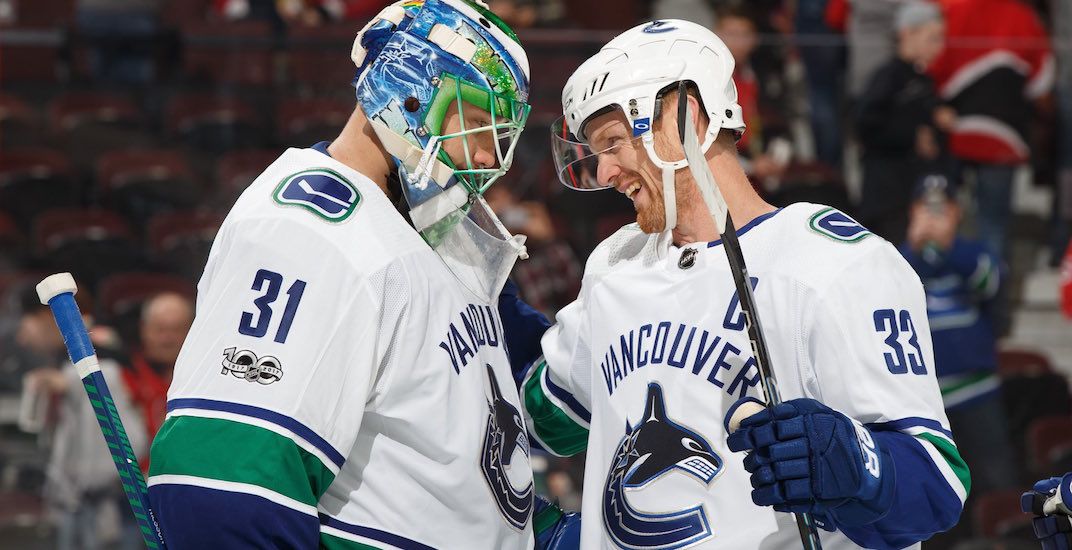 Repeat after me: there is no goaltending controversy in Vancouver.

Yes, Jacob Markstrom has had an up and down start to the season. Yes, his last game he looked softer than someone using an umbrella under an awning in Vancouver in the rain. And yes, Nilsson just had his best game as a Vancouver Canuck, shutting out the Ottawa Senators 3-0 Tuesday night.

But this is not a time to trot out one of Vancouver’s favourite terms. This is not the goaltending controversy you are looking for.

Sub Poll Question: How many games into the season before we get our first #canucks goaltending controversy? #tsn1040

You could smell it in the air, though, when Markstrom struggled against the Flames. On three of the goals he looked like he’d been set to rookie mode in an EA sports hockey game. All that was missing was Jacob turning around and batting a puck into his own net while “TopCheeseChel99” taunted over top of him, calling him out on his Twitch channel.

Of course, as luck would have it, Nilsson stepped up the next game and delivered a shutout.

The perfect storm for Vancouver hockey, really. There’s just something about goalies in this town that really gets our motors running.

But here’s the thing. Claiming it is the start of a goaltending controversy does a great disservice to the actual goalie controversies that have rolled through this city in the last decade.

You know what a controversy is? Endless debates about whether the red headed back-up goalie should be getting a start in the playoffs over your slick haired, pizza loving, poker playing, Twitter lurking, starting goaltender. Debates that to this day endure the test of time.

“I mean, what if they started Schneider on the road in Boston in Game 6?” is practically a form of greeting amongst Canucks fans when travelling abroad.

If Roberto Luongo is playing anyone else but a robot terminator sent back in time to ruin the lives of Canucks fans in Tim Thomas, he most likely wins that Cup in 2011. But alas we live in a cruel world where Zdeno Chara is allowed to pump the Stanley Cup on Vancouver ice. The stain of those horrible Stanley Cup Final road losses wouldn’t come out no matter how hard Lady Macbeth tried to help Bobby Lu with them.

Fast forward to stage two of that controversy.

The team is effectively handed over to Cory Schneider at the start of the 2012-13 season. Roberto Luongo, who is the greatest goaltender in Canucks history, has been told he is a back up goaltender. The former Islanders great has to sit back and wait to be traded, knowing that his time in Vancouver is done. Come trade deadline day, everyone is waiting on every single piece of news about Luongo.

“Did he step off the ice? Is he gone? Is it just another poo situation? Is someone checking the bathrooms? Is Roberto in the washroom? SOMEONE CHECK THE TOILETS.”

And then….silence. The smoke clears and out walks….Roberto Luongo. Still a Vancouver Canuck.

Roberto Luongo morosely declares his contract to be a flaming pile of turds (paraphrasing but it’s close enough) as to the reason why he wasn’t moved. People begin debating how sorry should you feel about a multi-millionaire athlete complaining about his high priced contract being a bad thing.

But don’t forget that during this time, Roberto Luongo was transforming from abrasive, “why the hell are you asking me that question” eyes of death to “loveable online Twitter personality.” In one of the greatest recoveries in Canucks athlete history, Roberto Luongo goes from a guy who some blamed for the 2011 Stanley Cup loss, to beloved local athlete who can poke fun at himself.

October wasn't so bad after all……… pic.twitter.com/ENst0nWoan

Think about it for a second. Not many people escape “reason for a Stanley Cup loss” purgatory in this city. Obviously Luongo wasn’t on a Nathan Lafayette level, but Roberto was absolutely murdered in the press and by the fans during the 2011 Final, with some of those voices coming from this city. Lest we forget “I’m out here pumping his tires” somehow becoming one of the hottest soundbites in NHL history.

Luongo went from a guy who couldn’t say anything right, to a guy who was cutting stand-up routines on Twitter, and people were loving it. All of a sudden Luongo was a crowd favourite again, and the 2012-13 season became almost a loving farewell tour for him. His TSN vignettes were some of the most “must see TV” in Vancouver.

Enter stage three of the controversy. Just as the city (and Roberto himself) had come to terms with leaving Vancouver, the 2013 NHL Draft rolls around.

“We have a trade to announce. You’re gonna want to heaaaaaaaaaar this” smirked Gary Bettman to the New Jersey crowd.

Cory Schneider out. Roberto Luongo back in. Rumours of owners of the Canucks flying to Luongo’s house to deliver the news to him become the topic of the day. Detailed descriptions of the owner telling Roberto to turn the TV off just before the trade is announced are bandied about. It’s straight up bananas in Vancouver.

Luongo, who has been told for an entire season that the team is moving on from him, that he isn’t good enough to be a starter anymore, is now the No. 1 guy again.

Desperate Housewives wishes they had thought up this storyline first.

So Roberto is back in the saddle. And sure, it takes some getting used to for him, but he has a fresh start with Point Roberts’ favourite son John Tortorella now coaching the team. What could go wrong?

For Roberto Luongo, who had been through so many ups and downs, this was the final straw, the final betrayal. It was a game Luongo had been looking forward to all year, and Tortorella, in one of his more tone deaf moves, handed the game to the backup, putting both goalies in an uncomfortable spot. People actually boo’d Eddie Lack in net. The anger was real.

So yes, when Anders Nilsson goes out and gets a shutout, it isn’t the start of a controversy. It’s simply competition.

Jacob Markstrom is not an established No. 1 goaltender. He is still trying to prove he can be relied upon consistently in net. There is a reason a guy like Nilsson was brought in, because it allows the Canucks to double down and see what they might have with two goalies. When one of them plays poorly, you put in the other guy. Markstrom was a more well known commodity for the Canucks which is most likely why he got the first handful of starts.

It’s a long season though.

There will probably be stretches where it looks like Markstrom or Nilsson is better than the other. Hell, during preseason Nilsson looked downright below average in net. Against the Oilers it looked like Markstrom was making a statement game (this was back before it was in fashion to trounce the Oilers). But here we are, a handful of games into the season, and Nilsson is the new flavour of the week.

Which is the way it should be. Two younger guys competing for the net. Each one trying to show he can be the guy. Each guy trying to prove they are the better goalie.

It’s not a goaltending controversy in Vancouver.