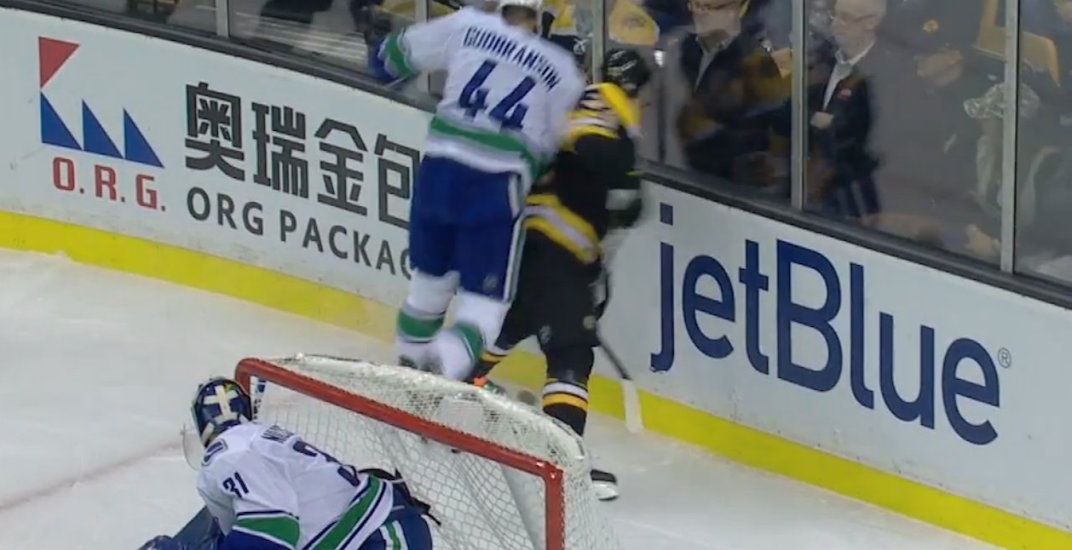 I wonder how Erik Gudbranson felt watching that first period from the Canucks’ dressing room.

Gudbranson’s night ended early after a boarding major on Frank Vatrano, and the Boston Bruins made the Vancouver Canucks pay with three goals on the power play.

After 20 minutes the Canucks trailed 4-1, this despite scoring the opening goal.

It’s the first time since the 2012-13 season the team has allowed four goals in the first period. Three of them came in the span of 1:37, and that was it for Anders Nilsson.

It looked like a completely different team than the one that shut out the Ottawa Senators on Tuesday. Then again, it’s not every game you have to kill five straight penalty minutes.

It wasn’t all bad though; Bo Horvat scored a goal and Brock Boeser extended his point streak. The Canucks could never recover from the disastrous penalty killing though and ultimately lost 6-3 to the Bruins.

Here’s how it went down.

So yeah… this happened.

Gudbranson lays out Frank Vatrano behind the Canucks net, and is predictably challenged to a fight after by Tim Schaller.

Some Canucks fans on Twitter seemed upset with the major, but I have no problem with this call. It’s a pretty reckless hit.

What I do have a problem with is no instigator penalty to Schaller. As John Shorthouse pointed out on the broadcast, Derek Dorsett got one in the game against Ottawa. Schaller should have gotten one here too.

Regardless, it was a five minute power play for the Bruins, and a major test for the Canucks penalty kill.

Things seemed okay at first. The Canucks killed the first two minutes or so. But then it hit the fan.

Rob summed it up perfectly in four screenshots.

The common theme is a forward left wide open in a prime scoring position.

Although, you might just have to tip your cap on that one.

The Canucks defence, particularly on the first and fourth goals, just wasn’t good enough. Anders Nilsson got the hook, but it’s hard to pin any of those on him.

It seems like talking about Boeser is the norm in the SixPack now, and the Brocketship had another solid outing.

He isn’t the fastest skater but he still seems to be able to find ways to get to good scoring areas at the NHL level.

Didn’t look like Boeser had a chance at a scoring chance on that rush, but he made it happen.

He didn’t have any particularly dazzling plays, but he had four shots and picked up a secondary assist on the goal by Bo Horvat.

The assist gives Boeser five points, and increases his point streak to four straight games to start the season.

Grab some popcorn, the Calder watch is on.

4. Travis Green and the Sedins

Here’s the list of Canucks forwards who had less ice time than the Sedins on Thursday.

Both Henrik and Daniel Sedin played under 13 minutes for the second straight game. The three previous games they saw 15:30 or more of ice time. But the Canucks lost all those games.

Then again, they lost this game too.

It’ll be something to watch going forward, and I’m curious whether the Sedins like it or not.

Of course, if they don’t, they’d still tell everyone otherwise.

Jake Virtanen played the least of the Canucks (except Gudbranson), but he made the most of his minutes.

Not sure if I agree with Travis Green’s strategy to keep his minutes so limited, but Virtanen continues to make an impact when he does hit the ice.

He had this nifty move on the first shift of the game around Charlie McAvoy, drawing a penalty.

Later, he was sacrificing his body in the defensive zone.

Love the effort on this shot block.

Virtanen finished with a shot, a hit, two blocks, and a +1 rating on the night.

Now give him more minutes, Green!

It may only be game six, but you’d better believe Team Tank is already armed and ready for another long season.

6-3 regulation loss
Brock Boeser point
Thomas Vanek goal for the trade value
Bo Horvat goal
A loss for the #Canucks, but a win for TEAM TANK

I mean, is he wrong?