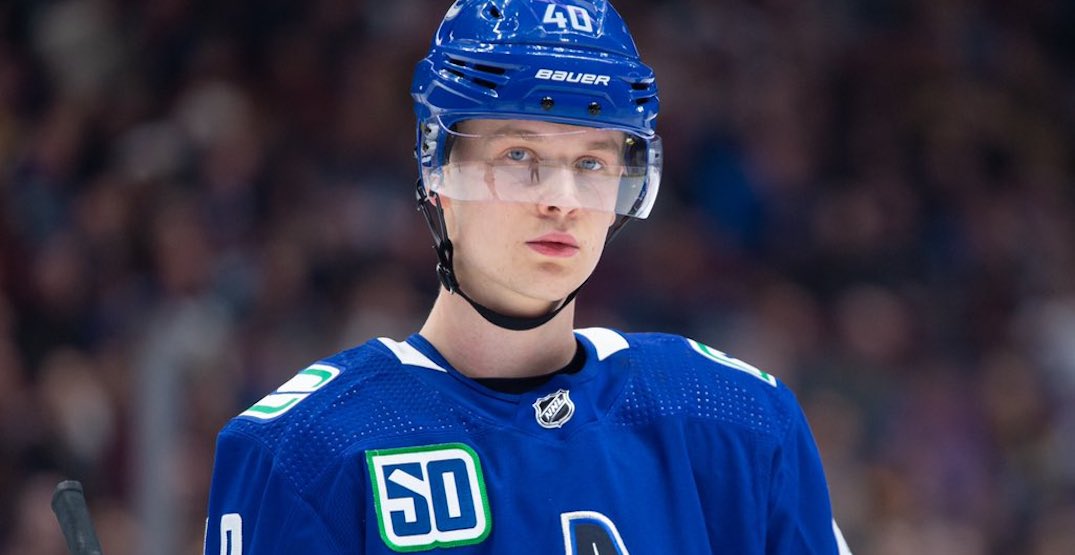 Elias Pettersson allowed fans to get to know him a little better this week, as the Canucks superstar spoke on today’s episode of the Spittin’ Chiclets podcast.

Unlike many of his teammates, the 21-year-old Swede is spending the offseason in Vancouver because he didn’t want to endure another 14-day quarantine prior to the start of next season.

When he’s not “scootering” around the city, Pettersson said he’s skating 1-2 times a week, but is spending more time in the gym, working out at Rogers Arena Monday to Friday.

“People think I don’t work out, but I’ve been working out my whole life, I just don’t show it,” Pettersson told hosts Paul Bissonnette and Ryan Whitney.

But it’s the stories about Pettersson away from the rink that will be of most interest to Canucks fans — even though he didn’t get into details about a lighthearted wrestling match with Quinn Hughes last season.

Pettersson is clearly tight with Hughes, joking that the rookie defenceman would tell him to “shut up” when he gave him advice. Brock Boeser is a close friend too, with Pettersson saying they hang out almost every day during the season.

Jacob Markstrom was also a teammate Pettersson said he was close with. The fellow Swede took him under his wing the past two seasons, which made the goaltender’s departure to Calgary extra difficult.

“That was tough for me,” said Pettersson. “Markstrom was of course a friend for life for me. He’s been taking care of me, telling me small stuff to think about… I listened to him… It was tough seeing Marky leave, but it’s business. I’m very happy with the contract he got because he deserves it.”

Pettersson has been active on social media since the season ended, and may be the first player in Canucks history to speak openly about his “brand.”

Whether it’s answering a request from a fan on Twitter, showing off his fashion sense, or appearing in an outrageous video with On The Bench, Canucks Nation can’t get enough of it. In a league full of players that are unable or unwilling to show off their personality, Pettersson is different.

“I want to build my brand, and be more out there, and show personality.

“It’s definitely hard to show outfits, your fashion, because we have to wear suits to all the games. NBA and football, they can wear whatever. So that’s why I’ve been trying to post a little bit more fashion posts on Instagram lately, still have more to come. Just trying to be a fun guy for people to follow. I’m having a good time doing it too.”

“I went to Canadian Tire, bought a basketball, and just did it,” Pettersson said about the dribble challenge video he posted on Twitter last month. “It took 30-60 seconds and people loved it. Just a quick thing like that, I’m having such a good time with it and the people enjoyed it too.”

Pettersson, who owns both PS4 and Xbox consoles, is one of many Canucks players that are into playing video games. He mentioned Call of Duty, Fortnite, NHL, FIFA, and NBA as games he plays, and said he’d like to start streaming, which is something Adam Gaudette has been doing a lot on Twitch.

welcome to the matrix 🕶

“I’ve always been into fashion. Now that I’ve been making a lot of money, (I’m) taking care of myself a little bit,” said Pettersson, who is likely to earn north of $10 million in the not too distant future.

Staking a claim to being the Canucks’ best-dressed player, Pettersson said he wore a Givenchy suit to the All-Star Game, and has been seen rocking designer brands like Off-White, Fear of God Essentials, Moncler, Louis Vuitton, and Yeezy of late.

Given his love for high-end designers, it’s no surprise that Pettersson said he’s in favour of changing the NHL’s strict dress code.

“I would like to dress the way I want to.”

For a brief moment prior to the playoffs, Pettersson thought he was going to get his wish. The NHL relaxed the dress code in the bubble, but many teams came up with a bland alternative anyway.

“We didn’t hear about if we were going to have an outfit, so I was getting excited to wear whatever I want. But three to four days before we left to Edmonton, we got slack pants, we got a blue golf shirt, and Adidas NMD shoes.”

“I brought some outfits if we were going to change for one game, but no.”

Unlike teammates Bo Horvat and Brandon Sutter, Pettersson says he isn’t a fan of country music, nor is he a metalhead.

A multi-talented person, Pettersson claimed he is a terrible singer.

Yes, he’s been to The Roxy

The Roxy has been a legendary stop on the NHL circuit, but do players still frequent the Granville Street club?

Pettersson confirmed it is, though he said he more often goes out in Yaletown — but didn’t mention any place specifically.

“Roxy, I’ve been there I think three times. It’s a fun, weird place I would say.”